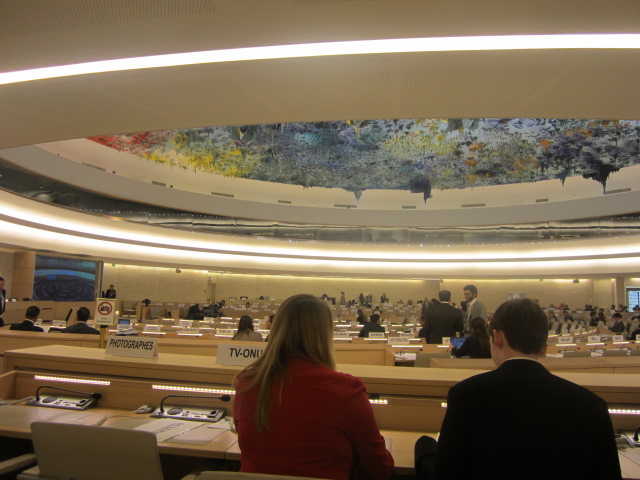 The South African capital marks the 13th city that Erin Kellogg ’14, a participant in the Semester at Sea program, has seen this semester. After setting sail from Southampton, England, Kellogg has docked at cities in Russia, Germany, Belgium, France, Ireland, Portugal, Spain and Morocco.

“I’ve had moments where I can’t actually believe I’m doing what I’m doing,” Kellogg said in an email.

Luckily there is photo evidence. On her blog, “Wind at My Back,” Kellogg catalogs her forays in posts with titles like “Grrrrmany,” “Love for Lisbon” and “Erin Went Braugh.”

On the blog, we learn that the self-titled “Red Head At Sea,” among conversations of American politics and explorations of world cultures, rated a Cadizian Sangria an “A+” and, in Dublin, was persuaded by locals to double pierce her ears.

Kellogg described her travels as a way to get a wider perspective on the world, not to gain intimate knowledge of a particular location.

“I wanted a program where I could experience a lot of different cultures and be able to make comparisons between different countries,” she said.

The comparisons Kellogg plans to make are not limited to amusements. Kellogg also has an interest in global healthcare and human rights. That’s why, for a few days in September, she visited Geneva, Switzerland, to attend the 24th session of the United Nations Human Rights Council.

Kellogg and 17 other students were selected to attend the event by the Institute for Shipboard Education, the organization that runs the Semester at Sea Program. Sponsorships from two human rights charities specializing in women’s rights granted the students access to the delegate floor of the council chamber, typically reserved for accredited NGOs.

Each student was given a name card—a “golden badge” that was actually blue in color —that, according to Zarin Hainsworth, vice chair of the National Association of Women’s Organizations, “allows you access into the sacred precincts.”

“Anyone who is allowed in those parts is very lucky,” she said in a podcast on the Semester at Sea web site.

The session lasted from Sept. 9 to 27, but on Sept. 13, the day that the students attended, the council’s agenda included a plenary meeting on “the protection of all human rights, civil, political, economic, social, and cultural rights, including the right to development.” According to Kellogg, it was the last item — the long-standing UN principle affirming every country’s right to develop itself — that was the primary focus.

As a public policy major, Kellogg said her chief interest regarding the right to development is in health care.

“Because so many health problems are so closely related to various sectors — government, education, social position, etc. — it’s important for a country to be able to develop all aspects so that community health can be improved,” she said.

In addition to attending the session, several students in the program also held what is called a “parallel” or “side” event, a type of break-out meeting in which the side event’s organizers are able to present on current topics in human rights. Among other subjects, the students’ presentation covered women’s rights, education and international drug policy.

“I thought it was awesome that we were able to be heard at an institution like the UN,” Kellogg said.

The students were also given a tour of the UN building, in which the meeting was convened. Although the Human Rights Council chambers are highly decorated — including a multi-million dollar technicolor ceiling — the tour guide made clear to the students that the UN “is not a museum.”

“The tour was followed by lunch at the UN cafeteria, which overlooks Lake Geneva and the Swiss Alps. Not a bad setting for a meal,” Kellogg wrote on her blog.

And after lunch, the group had a surprise in the store.

“We were able to get a private tour of a fairly new and amazing museum,” Annie Rappeport, Assistant Director for ISE Admissions said in an email.

The International Red Cross Museum, which opened in May after 22 months of closure, had just been redesigned by three different architects from different regions of the globe.

“I think it was another good example of how people can work together on an international level to help make the world a better place,” Kellogg said.

In addition to travel, Kellogg is interested in music and reading. On campus she is a member of the Nu Kappa Epsilon music sorority as well as the William and Mary Women’s Chorus. She doesn’t know where she wants to end up — right now Dublin is the front-runner — but she knows, like her fictional idol Elizabeth Bennet, she will not be complacent.

In her first post, titled “Let’s Start at the Very Beginning…”,  Kellogg quotes Jane Austen: “If adventures will not befall a young lady in her own village, she must seek them abroad.”

“Let’s just say after three years of tri-corner hats and cannon fire, I was in need of a new adventure,” she said.