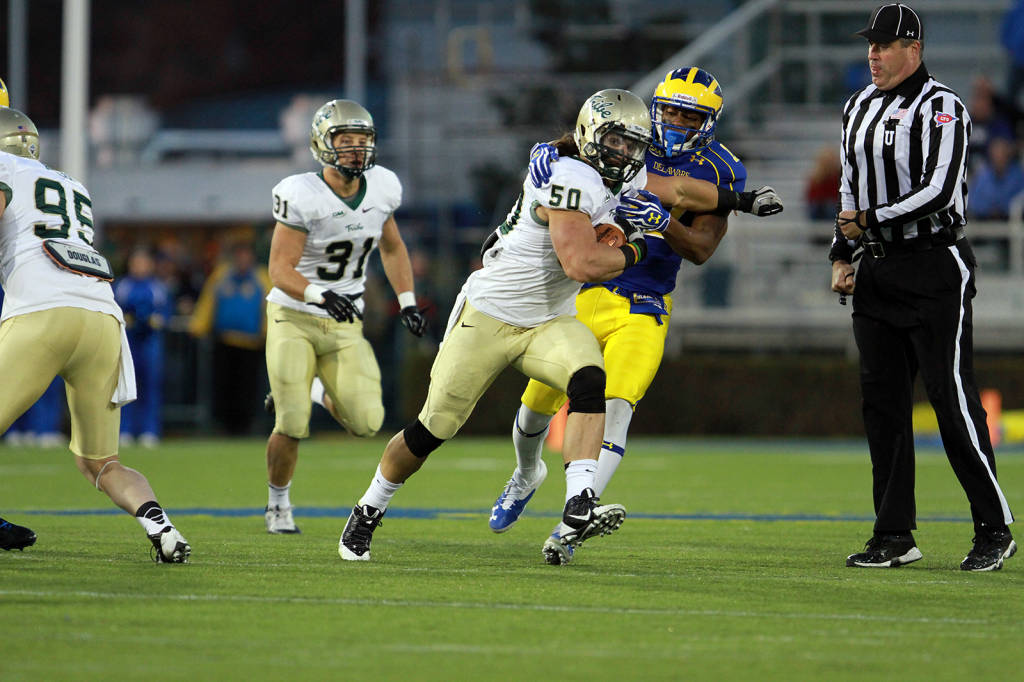 Power is the ability to coerce another individual to do something they don’t want to do. If the University of Delaware’s negative 35 yards rushing was any indication, the William and Mary defense is at the peak of its power.

The Tribe’s victory marked its third straight win over a ranked team and set up a legitimate chance to qualify for the Football Championship Subdivision playoffs — a possibility that seemed an impossible dream following a 34-20 drubbing to Maine three weeks ago.

The contest got off to an incongruous start as Delaware speedster return man Travis Hawkins cut through the Tribe special teams on the way to a 97-yard kickoff return for a touchdown. Delaware Stadium erupted during the run, but steadily became quieter and quieter as the game unfolded.

Sophomore safety Jared Velasquez got the Tribe rolling moments after the kickoff return. Velasquez forced the ball out of the hands of a Delaware receiver with a punishing hit, and senior safety Jerome Couplin capitalized. Couplin scooped up the ball off the ground and dashed unopposed for 51 yards to tie the game.

“I saw that Jared [Velasquez] hit him and the ball looked a little wobbly,” Couplin told Tribe Athletics. “When it popped out, I started running with it, didn’t hear a whistle, so I kept running.”

While the defense garnered most of the headlines, it was a banner day on both sides of the ball. John Carpenter gave the Tribe a 10-7 advantage with a 47-yard field goal, the longest of his career, in the waning seconds of the first quarter. Junior wideout Tre McBride earned his fifth touchdown of the season on an incredibly resourceful catch to put the Tribe up 10 points heading into halftime.

Senior quarterback Brent Caprio lofted the ball into the endzone slightly behind McBride, who had a Blue Hens defender draped over him. McBride kicked the ball off his right foot to keep it in the air and bide him time before swerving behind the defender to grab the ball and complete an improbable reception.

In his second start of the season, Caprio had another solid performance, contributing two touchdowns and an interception. Sophomore running back Mikal Abdul-Saboor, who was limited in last week’s game against New Hampshire due to an injury, returned to his starting role and was instrumental in the College’s offensive output. Abdul-Saboor finished with 147 yards rushing with an average of 4.4 yards per carry.

“We know our defense has our back, and we try to do the same, have their back when we go out there,” Abdul-Saboor said.

Caprio and company didn’t squander Rhodes’ gift. On the first play of the possession, Caprio hit junior wideout Sean Ballard for a 30-yard touchdown completion to put the College up 24-7.

A week earlier, Delaware had scored two touchdowns in the final minute of play for an improbable comeback win over Towson, making the Tribe’s 17-point advantage seem not so large. After Delaware notched a field goal at the end of the third quarter, the first points the College had allowed since the first quarter against James Madison two weeks ago, sophomore cornerback DeAndre Houston-Carson handed Sasek his second interception of the game, snuffing out a promising drive. The interception was the Tribe’s third forced turnover of the game and its fifth over the past eight quarters.

Opponents are averaging 12.2 points per game this season against the College, best in the FCS. Couplin garnered the CAA Defensive Player of the Week award for his six tackles and his fumble return for a touchdown.

The Tribe returns to Zable Stadium to face No. 10 Towson Saturday.