Home Variety Profiles Birds of a feather: The WM Griffin 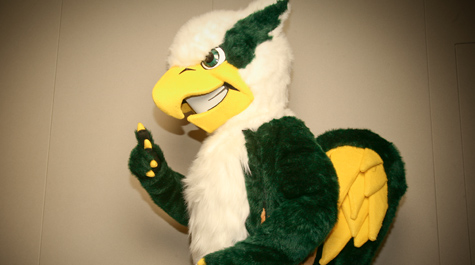 Have you ever wondered what the Griffin says? The word around campus is that it tweets. The Griffin’s Twitter account is one of the most followed College of William and Mary-related accounts. So far, it has acquired 570 followers and become a megaphone for the Griffin to actually say, or hash-tag, the words “GO TRIBE!”

According to the Griffin — who is part eagle — it is important that all fowl follow and use the avian-themed social media site.

Buckling under this bird-community peer pressure, the Griffin created an account in order to spread Tribe Pride by posting updates about events going on around campus and educate the public about griffins.

“There is such a lack of information about griffins out there today,” the Griffin said in an email. “This is my way of helping out my fellow griffins.”

The Griffin does this by having different games on twitter such as ‘Where’s Grif?,’ a game in which the Griffin’s followers have to guess his location on campus from picture clues and ‘Griffin Trivia,’ a weekly quiz which asks followers questions about him.

“Most people don’t know what I do all day,” the Griffin said in an email. “This is my way of letting everyone into my world”.

The Griffin’s Twitter allows him to stay connected with the students. Because he’s not in class with them on a daily basis, the Griffin uses the student body’s way of keeping in touch: social networking. His favorite part about having a Twitter is getting to chat with all of his friends.

The Griffin admits that at times it can be a struggle to use Twitter due to his smart phone being incompatible with his claws. However, he’s still happy to know that he can get out his message using his beak to tweet #GOTRIBE!