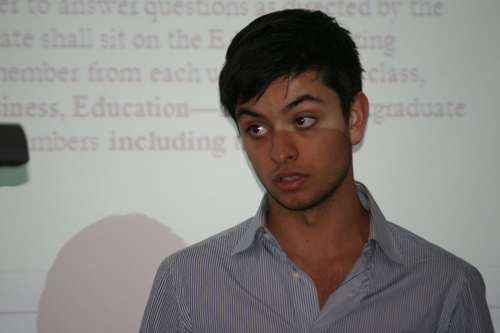 Secretary of Student Life Alyssa Zhu ’14 commented on the 2013 Homecoming Grants. Zhu said the way the SA decided to allocate money and publicize the event disappointed her committee.

“What we’re seeing is that there’s this miscommunication between the exec[utive] and senate. … There should have been more collaboration,” Zhu said.

Zhu said there were discrepancies between the organizations chosen by the Executive Student Life committee and the senate’s Finance Committee.

Senate Chair Will McConnell ’14 said the bill specified that the Finance Committee would decide which events to fund.

“The Executive Committee probably hadn’t read the bill; they decided to allocate before [the Finance Committee] met. … That was a lack of communication, but it didn’t really affect the process at all, because then we disregarded their decisions,” McConnell said. “We took them as good advice — our determinations were not too far from theirs — but it did proceed the way it should have.”

Zhu said the miscommunication between the student organizations running the events and the SA resulted in little publicity.

Sen. Daniel Ackerman ’16 said that senators’ apathy disappoints him. Ackerman said only three senators responded to an email he sent out Sunday asking for help with the Swem Snacks project.

“I know that a lot of people ran to have a title but at the same time, with that title, you have to understand, comes responsibility,” Ackerman said. “You’re not just here to attend the meetings; you’re also here to participate in events that we fund and organize.”

The senate passed the Transparency in Budgeting Act, which changes the code and specifies that the Secretary of Finance must choose the Executive Appropriations Committee through an open application process.

“I think that it’s something that makes sense for a committee that has hundreds of thousands of dollars under its control. It’s a good idea to make the composition of that committee as transparent as possible,” Sen. Caleb Stone J.D. ’15 said. “I really like what [SA President] Chase [Koontz ’13] and [SA Vice President] Mel [Alim ’13] and [Secretary of Finance] Joe [Soultanis ’15] have done this year and … I think it’s a good legacy for this body.”

The senate also passed the Elections Code Revisions Act, which also changes the code and specifies what constitutes an infraction. The bill also states that write-in candidates are subject to the same regulations as declared candidates. The bill removes the need for write-in candidates to announce their campaign before polls open and makes referendums voted for by the student body binding.

Before this bill passed, the senate needed to approve referendums voted on by the student body rather than their automatic implementation.

“We [made] a couple changes to make a more efficient, … leaner and just a better overall process for elections,” Sen. Chandler Crenshaw ’14 said.

McConnell introduced the Code Revision Committee Act and assigned it to the Executive Committee. The bill creates a committee that reads the code and recommends revisions.

Vasquez said the Publications Council spent $1,789.92 from the Student Publication Reserve during the last month.

Secretary of Outreach Kendall Lorenzen ’15 explained the roles of the SA’s different branches and described the budgeting process in a presentation she usually gives to student organizations.

The senate will not hold a meeting Nov. 26, but committee meetings will take place Sunday, Nov. 24.