Home Opinions Look back on fall 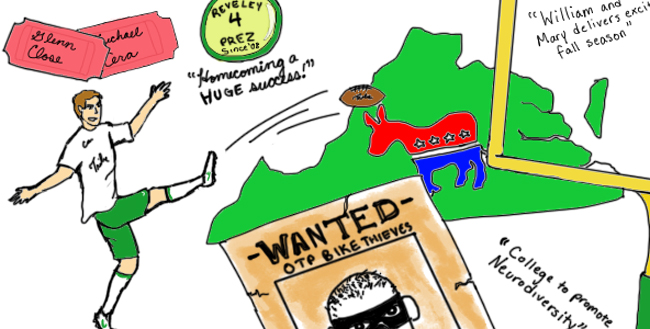 Is it time to panic yet? Wait. Now it’s time to panic. The semester is over; finals are here, and in an effort to stave off sequestration in Earl Gregg Swem Library, we’re going to discuss how great this year was and how it could have been even better.

First, College President Taylor Reveley’s contract was extended into 2017. Knowing that he will spend at least four more wry, succulent years at the College of William and Mary is cause for celebration.

The College received a record-breaking number of alumni donations this year. Thanks to dedicated employees, student volunteers and generous alumni, the College is able to stay open. To students going home for the holidays, tell your parents: “Guys, you don’t need to get me anything for Christmas this year. Instead, donate to the College. You can be the gift that keeps on giving. At least until you get my tuition bill.” (We’re kidding.)

The College also kicked butt in the almighty U.S. News and World Report college rankings this year. We are ranked No. 1 in study abroad programs and undergraduate teaching for public universities. We already knew they were great; now we’ve been validated.

Who didn’t enjoy having Glenn Close visit? We’re secretly hoping the Arts and Entertainment Council can nab Jon Stewart next year. Unlikely, but we can dream.

Housing changes for the College have also paid off. One Tribe Place residents certainly enjoy sleeping in hotel-sized beds and telling their friends outside the College that they live in a hotel. Residents of the new fraternity complexes have updated, high-quality housing to immortalize in whatever way they see fit; in the Green and Gold Village, freshmen can develop a passion for archaeology, digging up relics of their home’s debauched past.

Not everything went smoothly, however. Mold in OTP forced many to be bumped to Chandler Hall, which was supposed to go offline for this academic year. The promise of working laundry machines has been illusive at OTP, with many lugging their dirty clothes to the Bryan Complex. Also, the fraternity complex’s community building was not completed in time. More prioritization and focus could have improved these outcomes.

The College could have also done without bike theft. Unless you’re trying to re-enact Bicycle Thieves — and we’re not sure why you would do that — lay off the bikes. The same goes for anyone considering crashing cars into people’s houses. That has happened enough this year, and frankly, it’s just plain rude.

A Flat Hat editorial would not be complete without calling attention to the College community’s fight for faculty same-sex partner benefits. The Faculty Assembly’s unanimous resolution, former rector Jeffrey Trammel’s ’73 very public advocacy (and super awesome marriage in the Supreme Court), the gay-straight alliance William and Larry’s potential and the passionate involvement of thousands of students have made this issue unavoidable.

That said, among top public universities, the College is still ranked dead last in same-sex domestic partner benefits for faculty. There is only so much the College can do if the state does not get its act together.

We should remember the hard work so many put into making this semester a blast, and we should strive to make the next one even better. Until then, study hard and enjoy break.