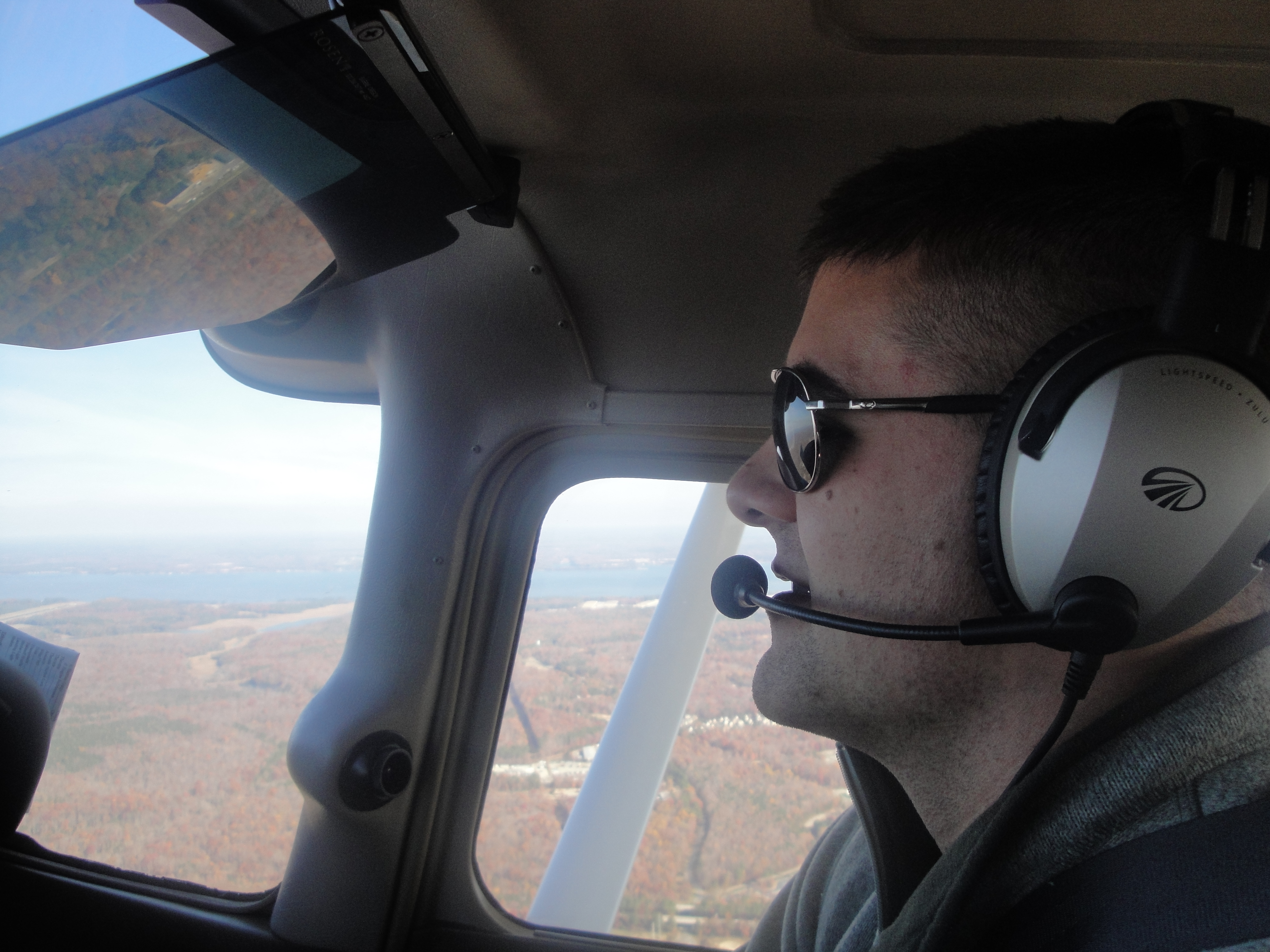 Eighty years ago, there was an airport at the end of Airport Road.

The College of William and Mary built the airport, and it owned a fleet of planes, too. Students could take flying courses for credit through the College’s flight school, and Amelia Earhart, who was an honorary member of the school’s Flight Club, spoke at the College in 1933. The airport was called College Airport, and College student aviators used it for practice.

“The last hanger collapsed maybe five years ago,” Evan Brandolino ’16 said. “I don’t know what it is, but it’s not there anymore.”

The College hasn’t had any sort of active aviation program for decades. Brandolino is trying to change that.

Nov. 11, two licensed private pilots, one licensed commercial pilot, one student pilot and a few students who like planes but have never flown before gathered in a Tucker Hall classroom.

With Brandolino presiding, the Aviation Club held its first meeting in almost 80 years.

‘Whatever you do, do it right’

“My great-grandfather was a pilot; he was one of Delta’s first pilots,” Brandolino said. “He ended up being their vice president of operations before he retired. And he was also a pilot for the Army in World War II, and I just always respected him a lot, because I heard about all the things he had done.”

When he became old enough, Brandolino interned at United Airlines for three summers. There was only one problem: He was afraid of flying.

“I felt out of control, and you are when you’re on a plane; you’re putting your life in the hands of pilots,” he said. “One of the reasons I wanted to learn was because not only had I had an interest in aviation for awhile, but I thought if I learned how to fly myself, I might feel less anxious about it.”

Brandolino started flying lessons this past summer. He usually flies about twice a week, and he has logged 20 hours of flight time so far — which means he’s halfway to getting his private pilot’s license. He flew his first solo flight just a few weeks ago.

Now, he wants to recreate a community of College students who are interested in aviation. If all goes according to plan, Brandolino sees club members attending airshows, touring air traffic control towers, participating in flight days, conducting philanthropy events, and going to the Williamsburg-Jamestown airport for cookouts.

Up in the air

It is 10 a.m. on a clear Wednesday morning, and Brandolino is in the flight school’s building at the Williamsburg-Jamestown airport. Apparently, it’s a wonderful day for flying — Brandolino has said so a few times already.

He isn’t flying today. Daniel Ryan ’12, an alumnus of the College and a licensed flight instructor, is taking up two passengers already. While the plane he will be using holds four, the plane was recently refueled, and it is safer to limit the weight until some of the fuel runs out.

So Brandolino waits inside while Ryan goes through the pre-flight procedures.

“It’s not just like hopping in the car and turning the key,” Ryan said. “You take a lot of precautions because, once we’re up there, we can’t just pull over to the side of the road.”

Ryan and his passengers each take a headset. It is loud in the air; they will use the headsets to protect their ears and to communicate with each other. When Ryan drives the plane over to the runway, he sits on the right side of the front seat. Pilots usually sit on the left, but Ryan is a flight instructor, too, and instructors sit on the right. When he takes off, he points out everything around him: There’s the School of Education. Over there’s Colonial Parkway. That’s Jamestown Island on the left.

“It really changes your perception of scale, how things become a little bit closer when you’re up in the air,” he said.

Ryan started flying when he had to leave the College football team because of an injury. He was looking for something to occupy his time, so he looked up “learn to fly” on the Internet and found out about the Williamsburg-Jamestown Airport.

“I had no idea this place was here,” he said.

‘A bastion of knowledge’

Despite its obscurity, the Williamsburg-Jamestown Airport is the heart of the local aviation community.

“People that are interested in aviation, they hang out there,” Brandolino said. “There’s a restaurant there. People get lunch there.”

Apart from Ryan, Brandolino and a few other students at the College, most of those people are older adults. Aviation is only about 100 years old — which means that a lot of those older adults started flying near the beginning of aviation history.

Ryan talks about Norm, an older pilot who hangs out at the airport. Norm designed a mechanism to lightening-proof airplanes. He also invented the technology that allows pilots to get weather information in their cockpits. And then there’s Tuck McAtee, who was an F-16 test pilot.

“He has a really cool airplane here,” Ryan said. “That thing is beautiful … He flies that airplane like it’s a fighter jet.”

Garrett Hendrickson ’15, who is a licensed commercial pilot and vice president of the Aviation Club, met an astronaut through his involvement in the aviation community. Now, the two are friends.

“I just email him. We’ll talk about aviation-related things,” Hendrickson said. “I usually let him know if I’m working on getting a new pilot rating or if I recently flew a really cool airplane.”

According to Brandolino, the consensus among the aviation community is that not enough young people are getting involved in the field. A lot of that has to do with the cost — aviation is an expensive hobby. Whenever younger people do express interest, seasoned aviators are typically willing to talk to them and to tell their stories.

“This place is a bastion of knowledge,” Ryan said.

Hendrickson thought about trying to restart the Aviation Club his freshman year, but he eventually abandoned the idea. When Brandolino contacted him this year, Hendrickson was willing to help him however he could.

As of now, Hendrickson is the most experienced pilot in the club.

“If we decide to go flying, at least starting off, for the first little while, I’ll be the guy that does the flying,” he said.

Hendrickson is a licensed commercial pilot. Someday, he wants to fly for the Coast Guard.

For now, he and Brandolino are focusing on rebuilding the aviation community at the College. It’s true that not many young people are expressing interest in aviation — but in Brandolino’s opinion, most people either don’t know that aviation can be a hobby, or have never thought of trying it. Flying, for them, is a means to an end.