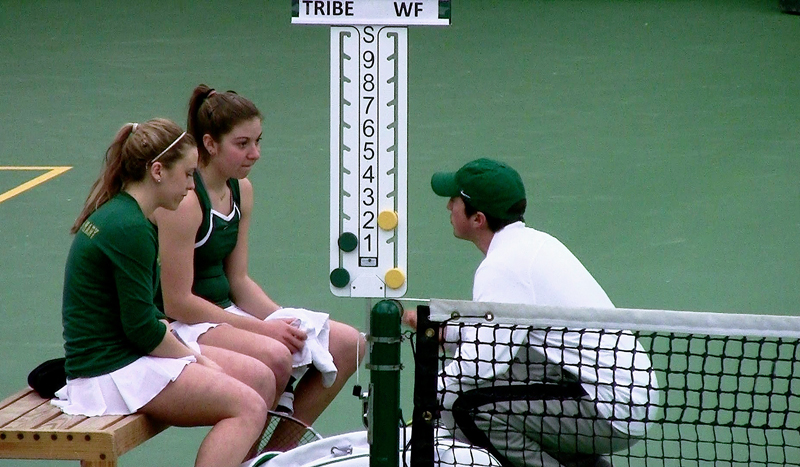 The No. 43 ranked Tribe (3-7, 1-0 CAA) took the opening doubles point against the Nittany Lions (3-4). Belaya and Nemchinov got the Tribe out to a good start, defeating Carmen Sandor and Taylor Shukow 6-2 for the duo’s third win of the season.

Sophomore Julia Casselbury and freshman Melanie Roy won at the No. 2 spot — their first combined win on the season — to earn the doubles point.

“It’s hard for us to get four singles wins, so getting the doubles point is very important for us,” head coach Tyler Thomson said.

After dropping the first set, Belaya stormed back to claim the second set and force a third set tiebreaker against Katia Bilk in singles play. She capped off the victory by capturing the tiebreaker 10-4, which upped her team’s lead to 2-0.

Nemchinov followed up Belaya’s win by defeating Sandor in two straight tiebreaks 7-6, 7-6. Freshman Nabila Farah secured the team win after beating Marie-Frederique Bedard 6-3, 6-1 in the fourth slot. Casselbury punctuated the win by pulling out a two-set win against Shukow.

The Tribe’s momentum from Saturday was squandered early Sunday afternoon as the Demon Deacons (7-0) captured the doubles point. The No. 1 doubles point was lost when Belaya and Nemchinov slipped to a 6-4 loss to Xue Zhang and Kasey Gardiner. Earlier, Casselbury and Melanie Roy lost quickly in their doubles match, falling 6-2. Thus, the Tribe had to win four out of the six singles matches in order to salvage the game, a task that proved difficult against a very balanced Demon Deacons team.

“They have a lot of depth on their team,” Thomson said. “There’s not a whole [lot] of a difference between number one and number six on their team.”

Wake Forest’s No. 4, 5 and 6 singles players quickly foiled the College’s aspirations of a comeback as all but one match was decided in two sets. Even though the outcome of the match was already sealed, Belaya, Nemchinov and Farah played on to the final point. After trouncing her opponent 6-1 in the first set, Farah surrendered the second set 1-6, then narrowly lost 10-8 in the third set tiebreaker.

“I didn’t think we competed as well as we have in some other matches this year,” Thomson said. “I think we looked tired at times on the court, but I think that’s something we need to get used to because we have a lot of weekends with two matches on the schedule.”

Although she fell 40-15 in the first game, Belaya surged back to break her opponent’s serve and went on to capture the first set. Her opponent, Andrea Retolaza, grabbed the second set as Belaya struggled to control her serve. Belaya refocused in the third set tiebreaker, seizing the win 10-4.

“It definitely wasn’t my best performance,” Belaya said. “I’ve been battling injury for most of the season, so I’m proud that I’ve been able to push through it and bring a point to my team despite the loss.”

Nemchinov competed against Kimmy Guerin at the No. 2 slot in a match where each set was decided by a tiebreaker. Guerin forced her way back from 4-6 down in the first set to ensure a tiebreaker, which she won.

With each player’s teammates watching from the sides and the crowd holding its breath, Nemchinov and Guerin returned point after point. Nemchinov fell behind 6-7, but seized the moment taking the final four points and the win.

Sunday marked the third straight match in which Belaya and Nemchinov won the No. 1 and No. 2 singles matches.

The Tribe will have a short break this weekend before traveling south. The Tribe will take on its second Colonial Athletic Association opponent of the season, the College of Charleston, with a chance to improve to 2-0 in league play Feb. 22.