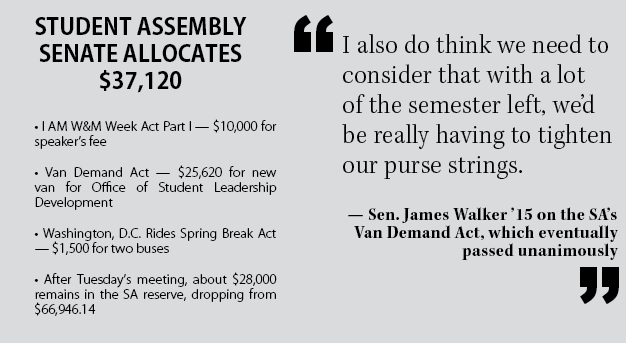 The Student Assembly Senate allocated funds for the I AM W&M Week speaker and for a new SA van during its meeting Tuesday.

Since its introduction last week, the I AM W&M Week 2014 Act was divided into two separate bills due to concerns raised during senate committee meetings Sunday.

I AM W&M Week 2014 Part I allocates $10,000 to a speaker’s fee, which passed unanimously, and Part II concerns other costs associated with the week’s events, including an expo and pride festival.

“I think the rewritten bill is great,” Sen. Daniel Ackerman ’16 said. “I like the way we separated and took out some things that were disagreed on.”

The Van Demand Act, sponsored by Sen. Colin Danly ’15 and Chairman Will McConnell ’14, allocates $25,620 to the purchasing and maintenance of an additional van that would be available to all registered student groups to use through the Office of Student Leadership Development.

“The Student Leadership Development office only has two student vans right now, which means that if three student groups come on one day [to use the van], which isn’t out of the question because there [are] over 250 active groups on campus … then they’re out of luck. So this is really an investment for the next five to 10 years,” Danly said. “I think it’s an important thing to do for the campus.”

Some senators hesitated on supporting the bill due to the funds that the Van Demand Act required because it spent a large sum of money relatively early on in the semester.

“I think this is a great thing, a great resource that we should definitely do at some point,” Sen. James Walker ’15 said. “But, I also do think we need to consider that with a lot of semester left, we’d be really having to tighten our purse strings.”

Despite some apprehension about the cost, proponents of the bill dissuaded the concerns and the bill passed unanimously.

Ackerman introduced the Washington, D.C. Rides Spring Break Act, which allocates $1,500 to fund two buses during Spring Break to transport students to and from the city similar to those employed during Fall Break last semester. The bill also passed unanimously.

The senate also heard an appeal from Matthew Fine J.D. ’14, head of the Marshall-Wythe School of Law’s national trial team. Fine came to appeal the trial team’s denied request made in January for $4,200 for funding to send two teams to the national championships in San Francisco, Ca.

The request was initially denied according to the SA’s policy to not fund events that have already taken place. However, the trial team did submit the paperwork requesting funding as soon as they found out about the invitation to send a second team to the championships.

After some discussion the senate chose unanimously to fund the total $4,200 by using the competition fund, which previously had a balance of $20,805.

Before the various allocations were made during Tuesday’s meeting, the senate’s reserve sat at $66,946.14. In total, the senate allocated $37,120 from the reserve and $4,200 from the competition fund. Danly said this leaves the senate with about $28,000 to work with in the reserve for the next nine senate meetings.

Sam Glover ’16 was nominated for the position of Secretary of Transportation, and his nomination is scheduled to be confirmed at the end of next week.