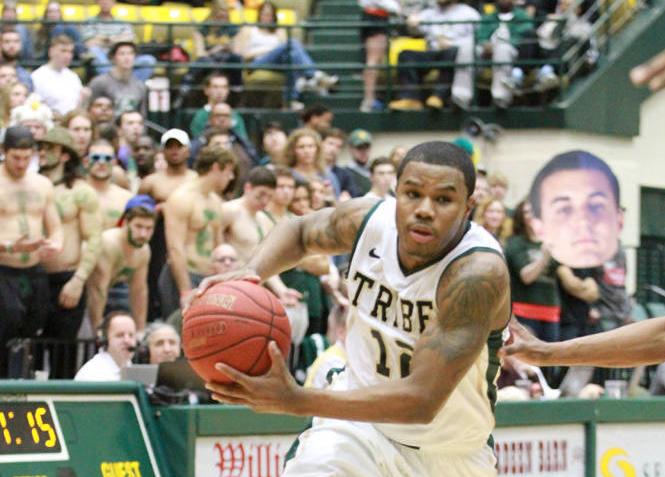 Saturday’s unsightly 85-70 defeat by Towson was easily forgotten in the shooting haze that ringed in William and Mary’s emphatic 93-70 victory over North Carolina-Wilmington at Kaplan Arena Monday.

The Tribe was paced from the start by senior guard Brandon Britt, who recorded his first start of the season and performed accordingly. Britt poured in 22 points on 8 of 11 shooting, including 4 of 5 from beyond the arc.

“Coach [Shaver] told me before the game that he had thoughts of starting me,” Britt said. “But I’m just trying to enjoy the game. We have like five more games, definite games, in my career, so my approach is just to have fun.”

Senior forward Kyle Gaillard opened up the Tribe’s scoring with a deep three-pointer that Britt echoed on the next possession. Of the Tribe’s first 10 possessions, eight resulted in three-point shots, six of which were good. The downpour wouldn’t desist until the end of the game as the College recorded 16 three-pointers, tied for the most in program history. Seven Tribe players contributed to the total.

“I just think we hit some shots tonight,” Britt said. “In practice we get a lot of shots up, that’s something we do this time of year with a lot of games going on. We just had a lot of guys step up and hit shots. I think repetition in practice is what allowed us to shoot so well.”

Two days after struggling through one of his worst shooting performances of his Tribe career, junior guard Marcus Thornton began the contest shooting 4 for 4 from the field with two three-pointers. Thornton would go on to score 15 points while also contributing a team-high five assists.

“I knew of Marcus’ performance on Saturday and that was probably the worst thing that could have happened to us coming into this game,” UNC-W head coach Buzz Peterson said.

Despite the Tribe’s early exploits from beyond the arc — 15 of its first 19 points were from three-balls — the Seahawks utilized a balanced inside-outside attack to grab a 20-19 lead with 11 minutes, 34 seconds left in the first half. However, the next two minutes went the way of the Tribe. A 10-0 scoring run that was catalyzed by the Tribe’s stingy 3-2 defense gave the Tribe a 29-20 advantage.

The Tribe lead bloated to 14 with 7:38 remaining in the half before shrinking to eight on Seahawks guard Tanner Milson’s three-pointer before half. Gaillard, Thornton and Britt controlled the Tribe’s offensive game through the first frame, scoring 39 of their team’s 44 points at halftime.

A short hook shot from senior forward Tim Rusthoven inaugurated the second half and prefigured the Tribe’s continued offensive success. According to head coach Tony Shaver, however, his team’s second half defense was most instrumental in its eventual victory.

The College’s 3-2 defensive structure held strong most possessions, forcing the Seahawks to use up most of the shot clock before settling on a shot and making sure no individual player developed a rhythm. Only two UNC-W players finished in double digit scoring, both of whom recorded 10 points.

“The key to this game was the second half,” Shaver said. “The first 10 to 12 minutes we really defended at a higher level. We really dominated the backboards, and, as a result, we got easy transition buckets.”

Defensive pressure led to easy scores on the other end. The College recorded 22 fast-break points, most notable of which was a powerful two-handed dunk from Thornton to put his team up 61-42 with 12:08 on the game-clock. After two three-pointers from freshman forward Daniel Dixon ballooned the Tribe’s lead to 26, the Tribe began to focus more on attacking the paint and exhausting the clock.

“They kind of go between a matchup zone and a man, so sometimes it’s a little difficult to figure out which system they’re even in,” Gaillard said. “But’s it’s very similar to what we worked on over the last few days, and I think we did a real good job as a team.”

The College seized its eighth Colonial Athletic Association win, 93-70, and completed a season sweep over UNC-W. The Seahawks came into Monday’s matchup hoping to eke out of the conference’s last-place slot after beating Towson and Northeastern a week prior; instead, they sunk even lower in the conference standings.

The Tribe returns to action Saturday at the College of Charleston, which it defeated 74-63 at home Jan. 27. Tip-off is set for 7 p.m.