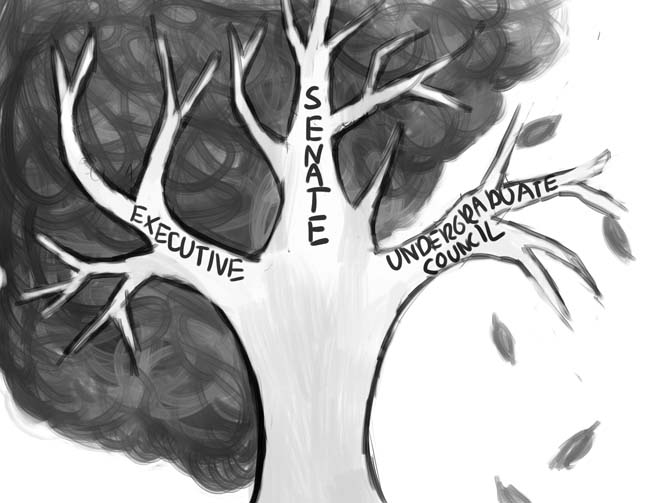 The Undergraduate Council has long been a source of redundancy within the Student Assembly. In past elections, certain positions have either gone uncontested or unfilled, and even attendance at meetings of the council is a problem. Thus, we approve of the SA’s measure to consolidate the positions of Vice President of Advocacy and Vice President of Social Affairs into a single Vice President position. The SA should take even more substantive action, however, and eliminate the council completely. The result would be a more competitive and credible SA, and move smaller groups of students working more closely in key areas – such as the senior class gift – rather than spreading them across organizations.

The council does not contribute enough to the SA to justify its existence as a separate body of student government. Often, its positions are unfilled, and their functions are ambiguous to students outside the SA as well as those who hold them. Students who consistently run unopposed or have to be convinced to fill positions lack incentive to perform well. Eliminating the council would make SA senate races more competitive and eliminate unfilled positions. Candidates would need to work harder to appeal to students, and senators would need to keep earning their seats.

Furthermore, the SA as a whole would become more efficient. When one section of it serves no significant purpose, it weighs down the senate’s ability to pass meaningful bills and conduct business in a timely fashion. The SA has accomplished much in the last few years, from establishing Tribe Rides to subsidizing STI testing, but it could do even more without the council; the SA would not have to worry about positions going unfilled and elected leaders lacking direction.

The senior class president’s role in planning and executing Convocation and Commencement would be served just as well by student appointments made by the school’s administration (Or like departments at the College, just since Commencement doesn’t raise money) Office of University Development. The best way to ensure high participation and enjoyment in these ceremonies is to have a diverse group of seniors and underclassmen leading the charge. Students could apply and focus solely on these ceremonies rather than leaving them to a choice few in an elected body whose efforts could be better suited elsewhere. With a strong, diverse group of students of all ages working to plan Convocation and Commencement alongside the administration, the senior class president would be unnecessary.

Now would be the best time for the SA to eliminate the council. The SA is holding an election soon after spring break, and newly elected students would be unhappy to lose their positions so quickly. The reorganization would be clean, and current council members would have a chance to make their final terms count.

While we know an elimination of the council is unlikely to occur any time soon, we commend the Code Revisions Committee for recommending it. It is clear the council’s diminishing importance has become a pressing issue for the SA, and eventually they intend to do something about it. We hope that soon the SA will understand the tremendous benefit it would reap from the merger: a more powerful and effective SA.