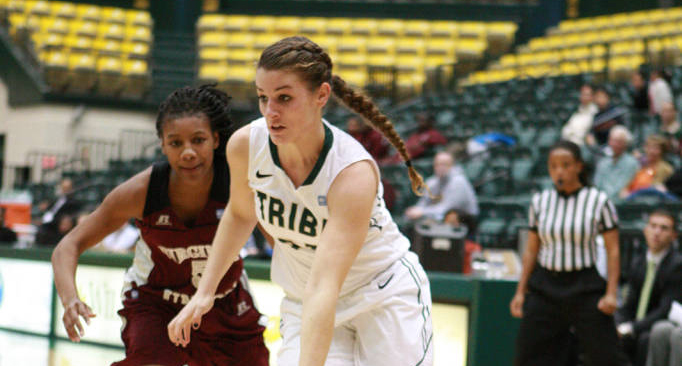 William and Mary faced conference foes James Madison and Hofstra over the break, turning in a lopsided result before pushing Hofstra to two overtimes. With the two losses, the Tribe finishes the regular season with an 8-20 overall record, including a 5-11 mark in Colonial Athletic Association play.

The game began with a successful run by the Dukes. James Madison senior Kirby Burkholder scored a layup less than 2 minutes into the first half before hitting a three-pointer a minute later. The Tribe remained scoreless until senior forward Kaitlyn Mathieu scored four minutes later.

The Dukes dominated the first half and the Tribe found itself staring down a 28-point disadvantage at the break, 46-18. The Dukes continued to overwhelm the Tribe as the game continued.

The Dukes converted 10 of their 26 field goal attempts, whereas the Tribe hit only five of 12 attempts. Sophomore point guard Brooke Stewart scored 10 points, the only player to score in the double digits for the Tribe.

“Brooke’s an important piece for us,” head coach Ed Swanson told Tribe Athletics. “We have her in the starting lineup because she can make shots. She just progressed nicely as the season has moved on and she’s got a great work ethic so I’m extremely happy with her progression so far.”

“They simply outplayed us — not only on the scoreboard but also with the effort plays and especially on sharing the basketball,” Swanson told Tribe Athletics. “They had 27 assists on 32 baskets — that’s great team basketball. Just a great team win for them. … We need to come with a much better effort and execution to stay in games.”

March 5 saw the Tribe play its last game of the regular season against fifth-seeded Hofstra (14-14, 8-8 CAA). The Tribe frustrated the Pride — even leading in the second half — through both halves before falling 80-77 in double overtime.

Hofstra put up 13 more shots, but the game was even in terms of points, assists and turnovers. The Tribe totaled 12 steals, whereas Hofstra had eight.

The Pride had a run less than three minutes into the first half, during which they scored eight points within two minutes. By halftime the Tribe trailed 34-29.

“After a slow start I thought we really picked it up, we fought our way back,” Swanson told Tribe Athletics. “I thought offensively we were really out of sync early on and a lot of unforced turnovers.”

The first overtime ended in a tie after an even battle, leading to a second overtime in which the Pride was finally able to break through after Hofstra sophomore Alexis Carter sank a three-pointer to seal the win.

Senior forward Kaitlyn Mathieu played a total of 48 minutes, scoring 23 points in what Swanson called “one of the better performances of her career.”

The Tribe faces UNC Wilmington, ranked last in the conference, at 2 p.m. Thursday in the 31st edition of the Colonial Athletic Association Tournament.

“I think the team has shown steady progress the entire year” Swanson told Tribe Athletics. “I’m extremely proud of how this team has battled the entire year. They didn’t give up. We’ve hit some rough patches but they got right back to work the next day and I’m really proud of the effort. The wins aren’t there but that’s [going to] come in time.”