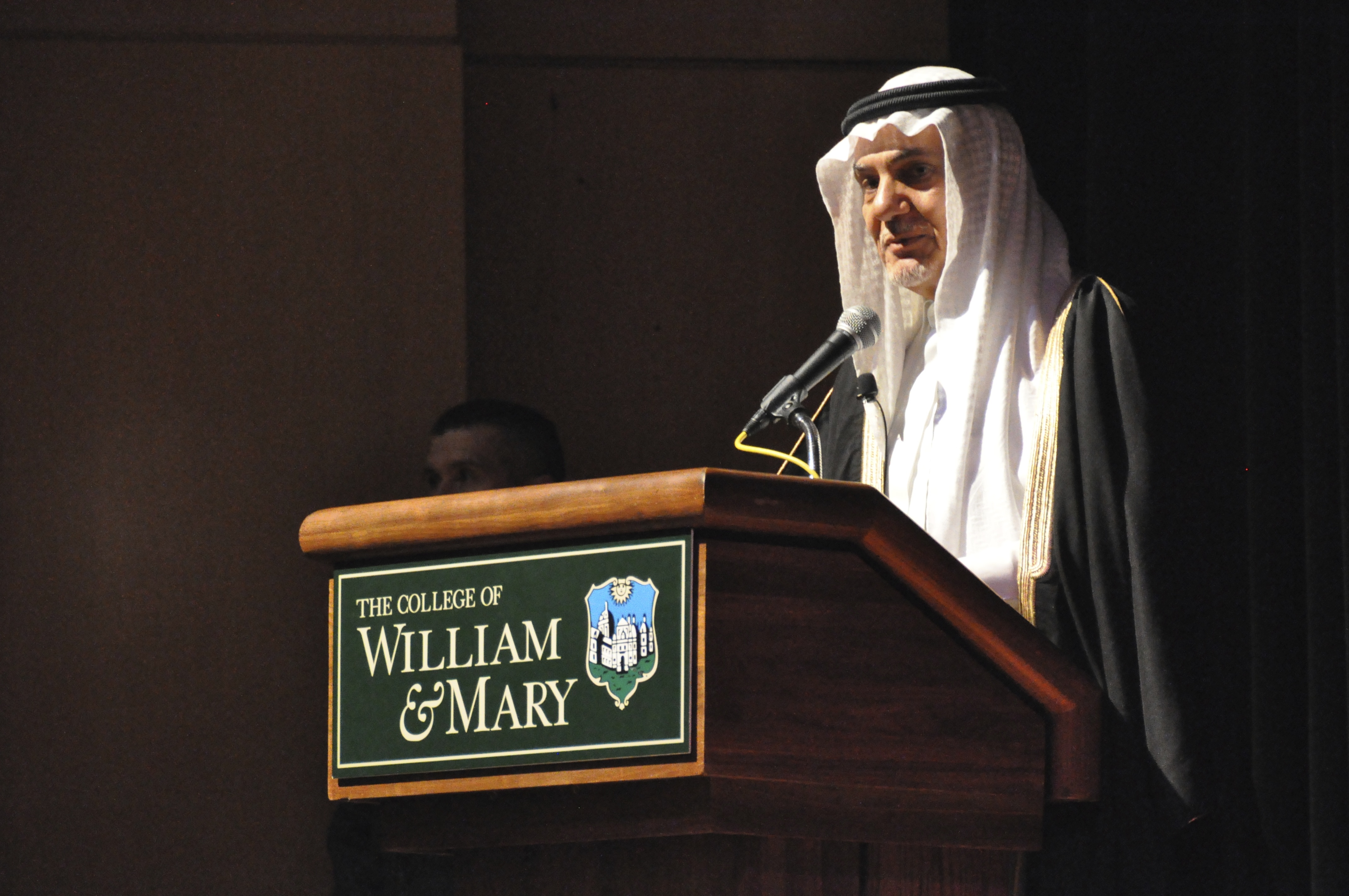 The king and queen who signed the charter are not the College of William and Mary’s only royal connections. Tuesday afternoon, the College hosted a prince.

He emphasized the role of stability as the foundation for peace in the region and spoke specifically about countries currently experiencing violence and civil unrest.

“There must be economic, political and social progress for the people and governments of the Middle East so that peace, not conflict, is clearly seen as the gateway to prosperity,” he said. “Stability, ladies and gentlemen, is the way to progress.”

However, significant obstacles complicate the road to stability. The development of nuclear weapons in Iran concerns Saudi Arabia, according to Prince Turki, because it could encourage nuclear proliferation in the region.

“The kingdom’s firm view is that the zone free of weapons of mass destruction is the surest way to prevent nuclear weapons proliferation in the Middle East,” Prince Turki said. “Such a zone must have a guarantee by the five permanent members of the Security Council to provide a nuclear security umbrella for the members of the zone as well as their guarantee for military sanctions against any member of the zone that seems to be developing weapons of mass destruction.”

Prince Turki also spoke of Saudi Arabia’s desire for peace in Iraq, Yemen, Syria, Lebanon, Egypt and Bahrain. Regarding Israel and Palestine, he promoted the Arab Peace Initiative, which current Saudi King Abdullah presented to the Arab League and which proposes a two-state solution that would restore the 1967 borders.

The speech was followed by a question-and-answer session; questions were drawn from written submissions completed at the start of the presentation and read aloud. Prince Turki condemned Russian military intervention in Crimea, claiming that Saudi Arabia does not support any foreign interference in a country’s internal affairs.

He also addressed the role of women in Saudi culture. While he expressed regret that women have not yet been afforded rights equal to those of men, he said that it is now the norm for women to hold jobs, and that this is considered universally beneficial.

“He seems very intelligent and very plugged into many cultures, not just his own,” Zack Manley ’17 said. “Getting to hear him speak, listening to his views, getting a wholly different perspective — as opposed to what we hear in our media from our politicians — was eye-opening.”

Kenen Professor of Humanities Tamara Sonn highlighted the relevance of Prince Turki’s visit by echoing his concern for the current crises facing the Middle East.

“The event was so important because the Middle East is going through a particularly turbulent time due to the ongoing war in Iraq; the civil war in Syria … and spilling over into Lebanon; continuing efforts to resolve the Palestine-Israel conflict; [and] continuing efforts to deal with Iran’s nuclear ambitions,” Sonn said in an email. “This is a critical moment in U.S.-Saudi relations; the kingdom disagrees with U.S. policy on both Syria and Iran.”

As former Saudi Arabian Director of Intelligence and former ambassador to the United States and the United Kingdom, security and foreign policy are Prince Turki’s specialties. He completed the majority of his education in the U.S., spending time developing a global frame of reference for Saudi Arabian politics rather than considering the kingdom solely within the context of Middle Eastern politics and economics.

“Saudia Arabia has a vital responsibility and a global role that is much larger than just the confines of the Arab world,” Prince Turki said. “We hope to increase our peaceful foreign engagements with nations in the name of improving our common humanitarian situation and also to foster a sense of Islam as a religion of collaboration and progress.