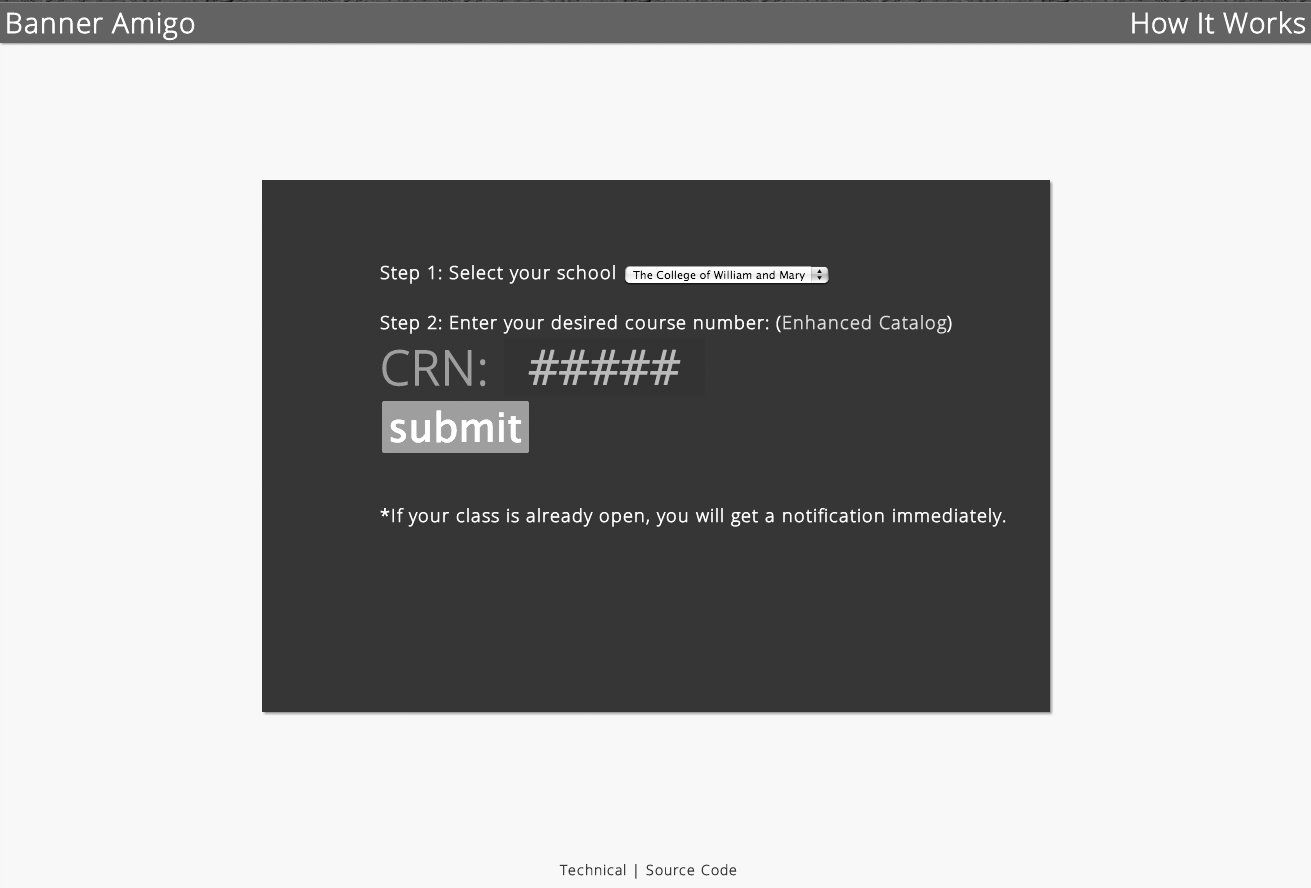 Caleb Severn ’16 registered for classes a month after everyone else last semester, so his preferred classes were full. Instead of checking Banner — the College of William and Mary’s course registration system — periodically or paying $5 per course at www.bannerstalker.com, Severn created a program that emailed him when the courses he specified opened.

Severn got into his courses, named his program Banner Amigo and shared it with the College community in time for the upcoming 2014 registration through the Facebook group “Overheard at William and Mary” Monday.

Banner Amigo emails students to notify them when a course they hope to register for opens up.

“My server asks the Banner server what courses are available . … First it will find the title of the class according to the CRN you entered,” Severn said. “Then it will find every class with a similar title, so you’ll get all sections and all labs.”

Students complete the process by filling out their email addresses and submitting their request.

Since most classes are open at this time, Banner Amigo will email students that their courses are open and then delete their request.

Peter Johnson ’15 created a similar program called Bannerstalker a year and a half ago after a computer science course he needed filled up before registration began. His program texts and emails students when their courses open.

“One thing I’ve seen with Bannerstalker is the classes flip flop between open and close[d] a lot, more than I would have expected,” Johnson said. “With Banner Amigo, it will delete your request after the first notification, and you’ll have to re-add it. Bannerstalker will notify you that [a class] is open and then closed and then open, and it will keep going back and forth until you close it yourself.”

Bannerstalker costs $5 per CRN, although additional sections are only $1 instead of a full price. Johnson considered making his service available for free before deciding on the current pricing model.

“I thought that was a fair price — it’s the cost of a cup of coffee — and it would limit the number of people using it so that they would actually get an advantage out of using it,” Johnson said. “I’m concerned if this does become a free thing it would become a net loss for everyone.”

Johnson said that he was concerned that if students create more programs like Banner Amigo, the College may take action against the websites.

“The William and Mary course list — which is where we get all the data from — it uses a decent amount of bandwidth,” Johnson said. “If too many people start [regularly checking it], the College might take action against these websites because bandwidth is expensive and that would put a strain on the servers.”

“I think it’s good that students have that [service] available to them, and they don’t have to be at their computer for five hours, trying to get into the one class they want,” Sean Byarlay ’14 said. “But I don’t think that should be an issue in the first place.”