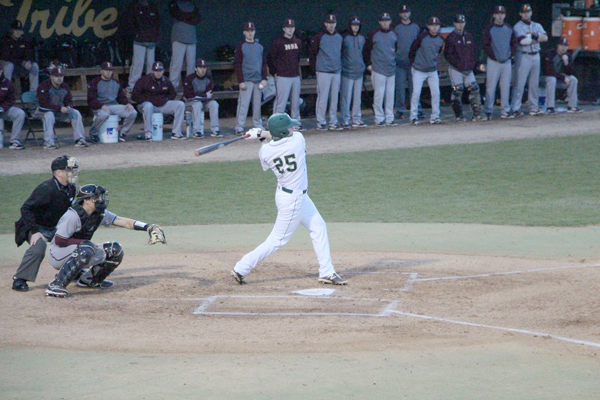 Although the final game was less resounding than the first, William and Mary (13-5) dominated Iona (1-5) over the weekend at Plumeri Park. The Tribe took the first game 31-1 before winning games two and three, 16-4 and 2-0, respectively.

The series sweep increased the Tribe’s winning streak to six straight, part of a larger run in which it has won 11 of its last 12 games. The Tribe’s bats have been electric during the stretch. The Tribe has driven in at least seven runs in nine of its last 12 games. The stretch has also included five games with double-digit run totals. Friday’s game highlighted the team’s recent batting surge.

“We’ve just been focusing on hitting the bats real hard and [there were] good conditions this week,” senior third baseman Kevin Casey said. “We’ve really been trying to stay aggressive.”

“I thought on-balance we really played well this weekend,” head coach Brian Murphy said. “All three of our starting pitchers were pretty good.”

Sophomore pitcher Mitchell Aker took to the mound Sunday to close out the sweep of the visiting Gaels. Aker (3-1) threw his best game of the season, holding Iona scoreless over seven innings. Unlike the previous two games, the Tribe’s batters needed the help from the team’s pitchers.

“I thought I pitched well, but I thought my defense helped me out a lot,” Aker said. “Chuck [Gould] caught a great game. It was a team effort — it wasn’t just me.”

Aker is entering his first full season as a starting pitcher. Murphy was pleased with his performance Sunday.

“I think Mitch [Aker] was really good today,” Murphy said. “I mean obviously anytime you get seven scoreless innings from your starter that’s certainly what you’re looking for. He’s certainly coming along well as a starting rotation guy.”

After tearing apart Iona’s pitching in the first two games, the Tribe was markedly less successful offensively in the third game. Junior first baseman Michael Katz drove home the Tribe’s first run in the first inning, hitting a single to left field which brought home Casey. Though the Tribe scored again in the fifth inning, it only needed the first for the win as the team’s pitchers held the Gaels scoreless.

Sophomore catcher Charley “Chuck” Gould recorded 11 RBIs in Friday’s win. However, Gould rested for most of Saturday’s game and then struggled Sunday, failing to record a hit in three at-bats.

Coming into the season, the team’s bullpen was a source of anxiety for many Tribe fans, and Murphy has said it was a “question mark.” However, the Tribe’s bullpen has stepped up during the team’s recent winning streak. Murphy utilizes a deep rotation of relief pitchers that often changes game-to-game.

Casey, who primarily plays third base, recorded his third save of the season Sunday. Casey struck out two and left one stranded in the top of the ninth to seal the sweep. Although the arrangement may seem atypical, Casey said he isn’t fazed by the extra workload.

The Tribe will begin the second half of its 10-game homestand Wednesday, hosting Longwood at 7 p.m.