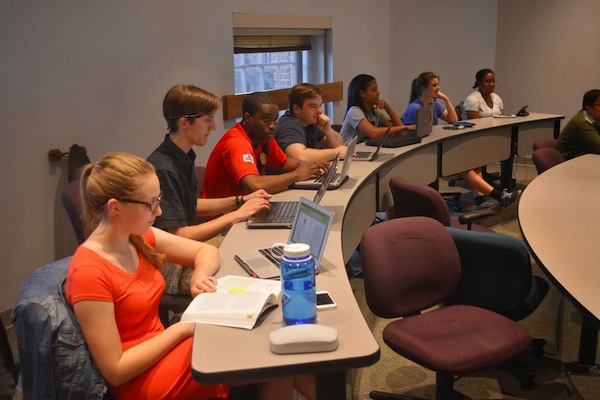 The Student Assembly Senate passed their budget recommendation for the 2014-15 academic year during their meeting Tuesday night.

After senators added several amendments to the Approve the Budget Act, the final budget total amounted to $695,800, working the projected student activities fee out to $98 per student.

Sen. Daniel Ackerman ’16 and Sen. Gabriel Morey ‘16 sponsored the Tribe Tailgate II Act, which amends the budget to fund Tribe Tailgates for 2014. The amendment reallocates $16,000 from Charter Day to Tribe Football Tailgates. This funding will be put toward providing portable toilets, security and set up for tailgate events for the anticipated six home football games in 2014.

“Right now we need the funding [for Tribe Tailgates],” Ackerman said. “The deadline to get the funding set up for the tailgates is going to happen before the accounts are replenished and before the next administration is sworn in. So we need the funds pre-allocated in the future budget that we are currently working on.”

The goal is then for the next senate to pass the full funding for Charter Day. The Tribe Tailgates II Act was introduced to the Finance and Budget Committee in their meeting Sunday and the committee passed the amendment.

Chairman of the Senate Will McConnell ’14 introduced the Save the World Amendment, which reduces the amount of money allocated to student groups for event advertising. Publicity had been $10, but with this amendment it will be cut down to $7. The operating expenses of the International Relations Club were also cut down from $20 to $7.

Consequently, the budget will allocate $90 to HelloWM for workbooks to aid with tutoring students in Korean.

“My amendment saved a lot of paper, … saved some money and [changed] hopefully for the future, the policy of giving $10 for advertising events — that brings it down to $7, that’s still plenty of flyers,” McConnell said. “It saved about $300 total.”

The Finance and Budget Committee also approved the Save the World amendment during their meeting and it was included in the budget.

The Save the Future of Humanity, Seriously Ladies and Gentlemen, Budget Amendment cuts $600 from Charter Day as well as $600 from Tribe Tailgates. This amendment was introduced to keep the student activities fee at $98. Without this amendment, the fee was sitting at $98.17, which would have been rounded to $99.

“Just to ensure that the Board of Visitors approves our budget, keeping it at $98 will help ensure that,” Ackerman said. “So I just think it is an important thing that we all pass this. If we go above $98 we risk some difficulties in getting the BOV [to approve the budget].”

The Save the Future of Humanity, Seriously Ladies and Gentlemen, Budget Amendment was passed on the floor of the Senate, becoming a change to the 2014-15 overall budget recommendation.

After senators discussed all of the amendments, the senate voted on the Approve the Budget Act, which passed. The passage of this bill means that the senate’s proposed budget is approved for the 2014-15 year. The bill’s passage also sets up the student activities fee.

During their meeting, the senate also heard a special business presentation concerning an activities and events request by TribeHacks. Secretary of Finance Joe Soultanis ’15, an organizer of the College of William and Mary’s first Hackathon, made the request. The request was presented on the floor of the senate per the SA’s Code, which dictates that any activities and events request over $3,000 must go before the entire senate and obtain a majority approval.

“TribeHacks is the first collegiate Hackathon hosted at the College of William and Mary. … This is basically a big push that I and some of my friends have made to try to get some more technological innovation and excitement on campus,” Soultanis said.

The Language Clarification Act and the Van Training Act were also passed during the senate meeting.