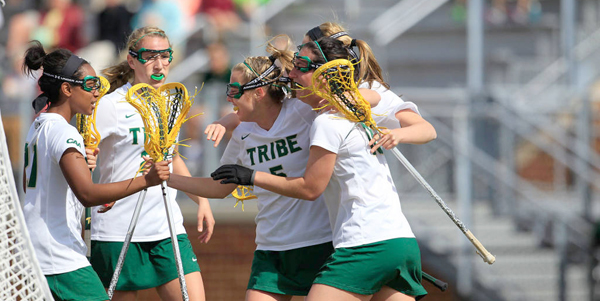 After a frustrating five-game losing skid over the past month, William and Mary (2-7) crushed Longwood (2-6) Tuesday afternoon at Martin Family Stadium by a margin of 16-3.

In a dominating performance, the Tribe offense peppered Longwood’s goalie with a season-high 34 shots, three more than the College’s last two games combined. At the start, the Lancers kept the game fairly close, keeping the game at 4-2 for the first 20 minutes after a pair of goals from senior attacker Taelor Salmon and junior attacker Kaleigh Noon. A Lancer foul gave junior midfielder Amanda Johnson an 8-meter free position shot. Johnson buried the shot into the net, and Tribe offense was in full swing.

“The draws were a big improvement,” head coach Hillary Fratzke said. “Each member of our team committed to helping the teammate next to them and it showed … by boxing out for a teammate.  We did a great job fighting to come up with the draw, not just when it was initially on the ground but also when it popped out, we were still going for it.”

The Tribe won nine of the next 10 draws while dominating the possession time with an impressive 9-0 run, as the offense repeatedly found open shots. Whether it was Salmon drawing the slide and then passing to a wide-open Noon coming from behind the goal, or junior midfielder Ellen Shaffrey finding senior midfielder Bridget Brown on the crease, the Tribe kept the points coming. Even when shots missed, the Tribe found the net as Brown caught a rebound off the goalpost to score.

“On offense, we committed to going to goal and scoring, and once everyone saw a few players have success, it really built our confidence and got the momentum rolling” Salmon said. “Also I thought we did a good job on riding their clears and creating turnovers.”

The College held the 24-15 turnover advantage in the contest, a category that the team has had difficulty winning over the past few games. The Tribe’s defense performed well, picking off multiple Longwood passes and pressuring the Lancers with aggressive double-teams. The offense also forced turnovers, effectively swarming the Lancer defenders who were trying to clear the ball after a save. Still, the Tribe gave up possessions on both sides of the ball.

Longwood finally scored to break the run at 15:38 in the 2nd half, but it wasn’t nearly enough to stop the Tribe’s onslaught. Salmon added another score with 12 minutes remaining, charging into multiple defenders on an 8-yard try to take the close shot in traffic. Fratzke then rotated in younger players as the clock dwindled down.

Though the Tribe dominated in nearly every category (34-12 in shots, 27-18 in groundballs, 13-7 in draws, and 24-15 in turnovers), Fratzke was still concerned about one stat in particular — nine saves by the Lancers.

“We could stand to put our shots away,” Fratzke said. “We were getting some good shots but we should plan on scoring 50 percent of our shots if not more. Moving forward, we have to have that expectation.”

The 9-0 run featured some impressive shooting, particularly a fake-high, shoot-low goal from Noon and a precision low-corner shot by midfielder Junior Alexi Farmakis, cutting across the crease. However, for other shots, the goalie didn’t even have to move. Poor shot placement, though not a significant factor in this game, was a crucial shortcoming in Tribe’s losses to Richmond, Albany and Virginia Tech.

Salmon led with five goals, while Noon racked up her second hat trick of the season. Freshman midfielder MC Curran added her third goal of the season, as senior defender Hannah Clarke scored her second for the year.

The College will be on the road for the next four games, facing No. 18 Ohio State Saturday in Columbus.

“They’ve proven themselves a top contender in recent years, so we have to be ready to play,” Fratzke said.

After Saturday, the Tribe will begin its conference schedule with three away games against Colonial Athletic Association opponents. Salmon said the team is eager for conference play.

“Hopefully we can make this win into a turning point … and have an upward trajectory heading into the CAAs,” Fratzke said.