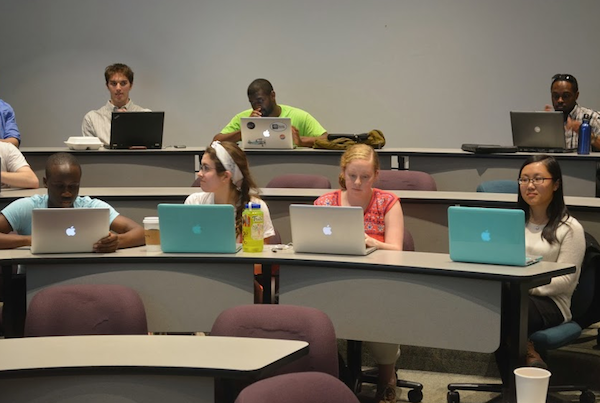 Beyonce may say that girls run the world, but that isn’t always the case in the College of William and Mary’s Student Assembly.

Last year’s SA elections saw a total of zero women vying for senate seats. This year, three women were elected by the freshmen class in the fall and an additional three women won positions in this past election cycle.

Michelle Tansey ’16, an incoming senator for the Class of 2016, noted that although not as many women run for SA positions, women can be successful. According to Tansey, a total of 38 people ran in last year’s SA elections, including 11 women. Of the 38 people who ran, 26 won positions and nine of those winners were women.

Secretary of Outreach and incoming SA Vice President Kendall Lorenzen ’15 said she sees societal influences as part of the reason why some women are deterred from running for SA positions.

“Our culture, I think, creates a lot of females as seeing themselves as supporting characters and not necessarily as people that are going out and making positive changes in the community … which is something we really need to change,” Lorenzen said.

President of the Class of 2015 Brianna Buch ’15 said she sees the overall image of politics as being a possible source of dissuasion for everyone — not just women — considering running for student government positions.

“It is pretty intimidating to run for a position,” Buch said. “The fact that sometimes politics tends to have this stereotype of being kind of [dog eat] dog and really aggressive. And I think that kind of mentality can keep a lot of people away.”

Sometimes, efforts encouraging women to run for SA leadership positions occur on a personal level with current female SA officers talking to other women on campus about pursuing positions. Sen. Emily Thomas ’17 said her RA, Lorenzen, encouraged her to run. Thomas said Lorenzen made her aware of the lack of female representation in the Senate.

Thomas said she believes it is important for women to be involved in the senate, in order to make sure women’s needs are being well addressed by the SA.

“[The] senate has so much power,” Thomas said. “They dictate so many of the decisions that are made for on-campus events, what is really deemed important to SA and how to reflect that for the students. It is absolutely necessary that we have females there because they are a large part of this campus … and their wants and needs need to be reflected in everything the SA does.”

Class of 2017 President Pheobe Galt ’17 said increasing student knowledge of what the SA does on campus could embolden more students considering SA positions to become involved.

“Getting people who don’t know much about [the SA] — so specifically the new transfers and the new freshmen —  to just understand what Student Assembly is [our primary objective] and from there I think it’s inevitable that the races will get more competitive and from that more women will run,” Tansey said.

Lorenzen is looking into helping create a women’s mentorship program that will encourage women to start viewing themselves as leaders earlier on, in order to get more women considering roles within the SA.

Galt said she believes that the SA needs to become more reflective of the student body’s makeup.

“The senate and the [Undergraduate Council] need to be more representative,” Galt said. “Or at the very least I think we should have people from organizations, like cultural organizations, play a larger role in Student Assembly decision-making. Because as it is, it’s not as representative as it could and should be.”

The SA women expressed hope is that the trend of more women running for SA positions will continue in years to come. Buch encourages women to believe in themselves and their abilities when considering running for the SA.

“Be courageous and don’t underestimate yourself,” Buch said. “It is easy to do that and I know at least for me it was overwhelming to see the support I received from people. I would just encourage women to get involved and not feel like it is someone else’s responsibility to do it, but it is their responsibility. I genuinely believe the more women we have, the better SA will be.”