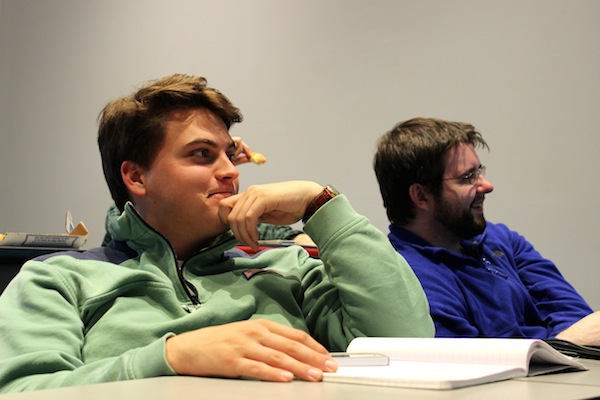 Originally, the bill suggested changing all the masculine pronouns to read “he or she,” but during the senate’s last meeting, Secretary of Diversity Dylan Frendt ’14 recommended the language be changed to “they” and “their,” in order to respect those who do not identify as male or female.

“I have been told by the Secretary of Diversity that it’s actually more inclusive [to say ‘they’ or ‘their’] than saying ‘he’ or ‘she,’ because it also includes people that don’t identify with either gender,” Morey said.

During Tuesday’s meeting, sen. Caleb Stone J.D. ’15 made another suggestion regarding the constitution’s language. Stone proposed that instead of using pronouns, the constitution could continue the use of the title of the position being addressed.

“We should just change it to — instead of using pronouns — [using] the title. Like ‘the president will do this’ not ‘he or she will do this,’ that is much better than ‘they,’ which is a disaster, honestly, grammatically,” Stone said. “I think it would be better if we are going to do this and we can’t use ‘he or she’ to just use the title.”

Morey accepted Stone’s suggestion, and the bill was amended to have the Constitution’s masculine pronouns replaced by the name of respective positions. The Gender-Neutral Constitution Act was approved unanimously by roll call.

The bill must be voted on by both the undergraduate and graduate councils for it to be approved as a change to the constitution.

Chairman of the senate Will McConnell ’14 and Vice President Mel Alim ’14 also encouraged senators to promote the King & Queen Ball, which will take place Friday.

Currently, only 180 tickets for the dance have been sold as of Tuesday, while the SA’s goal for ticket sales is around 1,000 tickets.

Outgoing sen. and recently inaugurated SA President Colin Danly ’15 updated the senate on its funds. The reserve is currently at $14,450, the activities and events fund is at $4,425, and the competition fund is at $4,705.

At the last meeting of the 321st Senate, senators shared their appreciation and satisfaction with all the senate has accomplished during the session.

“I just want to say that I came into the senate late, but that I was really, really warmly welcomed by everyone here,” sen. Chase Jordan ’15 said. “This is the highlight of my week. I love you guys and can’t wait to see you next year.”

The senate went into closed session to discuss personal matters.