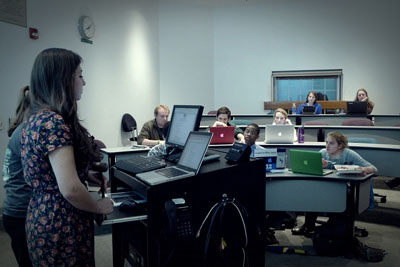 In the final meeting of the 320th Student Assembly senate, senators passed the Class President Constitution Act and the One Tribe, 19 Tailgates Act. The Code Revision Committee Act and Student Development Act are among the bills that senators will carry into the next session Tuesday, April 16.

The One Tribe, 19 Tailgates Act passed unanimously. The program will provide spots for campus organizations to tailgate before the six home football games next fall.

“This is really something that campus has been lacking,” Sen. Colin Danly ’15 said. “It’s something I noticed during my first few weeks here at the College.”

Any College of William and Mary student can attend the tailgate, but certain organizations will be given a specific spot.

“If the organizations meet the requirements, they’re going to be put in a raffle for it,” outgoing senate chair Kendall Lorenzen ’15 said.

At least one spot will be reserved for a graduate student organization and each organization is responsible for cleanup. Organizations that provide alcohol must provide non-alcoholic drinks as well.

“I think it would be a great change for William and Mary — a monumental change to student life and something we’ve been lacking, both in terms of enthusiasm for sports and general happiness about and excitement about football and student life,” outgoing Class of 2014 president John Bracaglia ’14 said.

The SA will allocate $6,800 to pay for fencing, trash cans for each organization and three guards. The Department of Student Life will be responsible for coordinating the program.

“While I think it’s definitely going to be a challenge next year because it’s the first time we’re doing this, that’s not necessarily a bad thing at all,” outgoing Sen. Drew Wilke ’15 said. “I definitely have faith in everyone in SA next year to make this a priority.”

The act is a follow-up from the Class Presidents Act approved last week. The constitutional change required a three-quarter vote.

“It’s more of a formality — the code changes will take effect next week,” Wilke said. “I want the constitution to be updated.”

The senate and Undergraduate Council has thirty days to revote on the constitution change and then it will become law.

The senate entered closed session to discuss personnel matters for the remainder of the meeting. The Executive branch is currently running I AM W&M week events and planning the King and Queens ball, which will take place Friday, April 19.