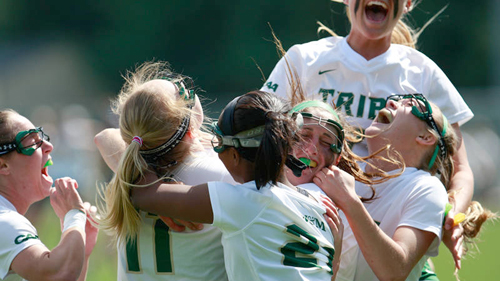 A fifth consecutive loss Friday quickly faded into memory as William and Mary rallied for a double overtime win Sunday. After falling to Hofstra 10-5 Friday, the College rebounded and recorded its first conference win — its third overall — by virtue of an 11-10 decision over Drexel.

The weekend series brought an end to the Tribe’s conference slate, as the College finished with a 1-4 record. While Friday featured a result similar to the majority of the season, Sunday offered an exclamation point to the end of Colonial Athletic Association play.

Junior midfielder Alexi Farmakis found the net twice and sophomore attacker Zoe Boger scored once to build an early 3-1 lead over Hofstra Friday. The Pride responded with four unanswered goals to enter the break with a 5-3 advantage.

Hofstra’s run didn’t end with the halftime whistle, however, as the Pride added four unanswered goals to open the second half. Senior attacker Taelor Salmon finally broke the scoreless streak, netting a goal with 10:24 remaining in the game.

Farmakis added a game-high third goal off a free-position shot, but the two goals were as close as the Tribe would get to the Pride’s commanding lead. All told, Hofstra held the College’s offense scoreless for just over 38 minutes.

Statistically, the Tribe recorded five more draw controls than the Pride, but fell short of Hofstra’s ground balls and shots (24-19). With the loss, the College had only Sunday’s game remaining to secure a win in the conference.

Unlike Friday, the College took the lead into the break. A 5-1 run over the final 16:23 of the first half allowed for a 7-4 advantage over Drexel. Five players scored in the opening frame.

After the second-half whistle, Drexel balanced the game and scored five of the first six goals. The College attempted to rally for the reminder of the half, drawing even at nine apiece before falling behind 10-9.

With 46.1 seconds remaining in regulation, junior midfielder Amanda Johnson tied the game at ten apiece off a free-position shot. With the final whistle seconds later, both teams prepared for overtime.

Neither team scored in the first frame. Following a missed Farmakis shot, head coach Hillary Fratzke called a timeout to draw up a final play. 10.8 seconds remained in the second overtime.

Junior Kaleigh Noon gathered possession behind the goal and fired a pass to junior attacker Ellen Shaffrey. A quick shot settled the game, as Shaffrey recorded the game winner.

The College led in a number of categories, including an 18-7 draw control advantage, 19-18 ground ball advantage and 36-25 shot advantage. Freshman Abby Junior earned conference Rookie of the Week accolades. Junior is tied for fifth in the CAA with 1.47 caused turnovers per game, highlighted by four caused turnovers over the weekend.

The Tribe’s season concludes with a Saturday non-conference matchup with in-state foe Old Dominion. The match is set to begin at 1 p.m.

WLAX: Abby Junior was a force in a huge win for @_Tribe_Lacrosse on Sunday. She earns #CAASports ROTW honors. #WMTribe