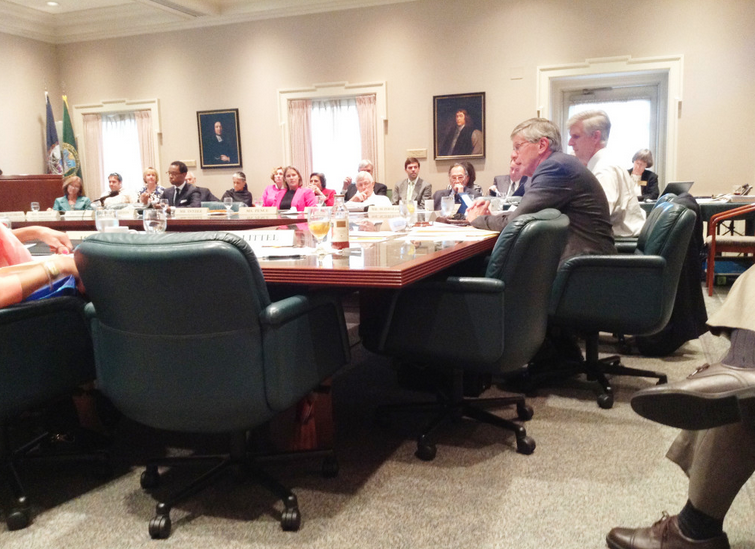 The College of William and Mary’s Board of Visitors convened for its April meetings last Wednesday, Thursday and Friday.

The College of William and Mary’s Board of Visitors Committee on Academic Affairs approved 23 resolutions in its meeting Thursday.

The first nine resolutions involved personnel issues that the committee discussed in closed session. Four of the remaining resolutions modified the bylaws in the faculty handbook. Two resolutions aimed to examine what credit the College can give for military training.

Provost Michael Halleran spoke about the administration’s efforts to develop policies that utilize the correct balance of teaching and research. The resolutions passed are part of the William and Mary Promise, which aims to find the best balance between teaching and research among faculty. The College is also developing two e-learning courses as part of this initiative.

Gene Roche will step down from his job as Director of University E-learning Initiatives/Academic Information Services. Halleran has launched a search for a replacement in a position he renamed the associate provost.

Current Vice President of the Faculty Assembly Susan Grover will begin a role as Vice Provost for Academic and Faculty Affairs July 1.

The Board of Visitors Committee on Athletics met Thursday to address issues in the football and basketball programs, including the process of grey shirting and participation in the NCAA championship.

College of William and Mary Athletic Director Terry Driscoll presented the possibility of implementing a grey shirt program which would invite high school graduates  to enroll a semester later than they do now.

Driscoll said that while the policy would most likely only be used on rare occasions, it would strengthen the College’s admissions program.

“It would be something to have in terms of our ability from a competitive recruiting advantage,” he said.

Board members expressed concern  that grey-shirted students would miss the fall orientation process which other student athletes attend with their peers — however, outgoing Student Assembly president Chase Koontz ’14 said that in his experience as an orientation aide for several football players, they are not fully integrated into the orientation experience anyway.

“My experience has been [that] they have a very different engagement with even the members of their hall and the activities they are able to attend,” Koontz said.

Basketball dominated the conversation, however, as wounds still smarted from the men’s basketball team’s missed shot at the NCAA championship.

“Twenty years ago, being able to have academic excellence and athletic excellence was a rarity. It was a unicorn that you’d see every once in a while,” committee chair Pete Snyder ’94 said. “Nowadays … so many of our peer schools have proven that you can have the ability to walk and chew gum at the same time.”

Associate Vice President of Communications Brian Whitson and Senior Assistant Athletic Director Pete Clawson presented on the opportunities the College could access if the men’s basketball team makes it to the championship next year.

Had the College made it to the championship this year, it would have made national news. The College’s success would have been the leading story on ESPN Sports Center and a  feature on CBSSports Selection Sunday.

“The NCAA men’s basketball tournament provides us the single biggest platform for national exposure as an athletics department,” Clawson said.

Clawson emphasized the financial benefits the College would reap from increased ticket and merchandise sales, as well as funds for appearances from the NCAA tournament itself. The College also would have the opportunity to broadcast 30-second ads for free during the tournament – ads which would normally cost about a quarter of a million dollars.

Socially, the basketball team’s success would greater engage the College’s alumni network and boost morale on campus, as well as bolster social media.

“It doesn’t mean that making the tournament would be the greatest thing in the world for William and Mary — it wouldn’t — but can you change the trajectory from a brand-reputation perspective of a school? And I think we have the opportunity there, without a doubt,” Snyder said. “This is about aspiring for excellence.”

The Board of Visitors’ Executive Committee gathered in the Rector’s Office Wednesday afternoon.

Before going into closed session, Rector of the College of William and Mary Todd Stottlemyer ’85 gave a brief overview of the Board of Visitors’ activities for the week, including passing the budget.

“We do have a busy couple of days. … We’ve got a lot to do relating to a number of important subjects,” Stottlemyer said.

Stottlemyer also highlighted the Virginia General Assembly’s current standstill in passing the state budget as the source of possible contingencies for the College.

College President Taylor Reveley described the situation in Richmond as  “very un-Virginia like.”

If the General Assembly continues to make no movement on the state budget, it could have implications for the College’s own budget and student tuition.

After passing their minutes from their last meeting and a brief discussion on the agenda, the Executive Committee went into closed session.

During Thursday’s Provost Report, the College of William and Mary’s Board of Visitors discussed faculty compensation and how the William and Mary Promise can lead to more competitive faculty salaries.

The William and Mary Promise, implemented in 2013, states that the College needs to employ more faculty to teach undergraduate classes so professors do not lose research productivity due to classroom time. The Board discussed whether or not this is a valid clause, and how the College could keep faculty pay competitive while employing more professors.

“What the promise is trying to do is offer an extremely high level of education, which is rare in a public university environment,” Provost Michael Halleran said. “We’re also doing it in an environment that is politically and fiscally more challenging than it’s been in the past.”

Rector of the Board Todd Stottelmyer ’85 noted that a faculty member serves two primary roles, both as a scholar and a teacher.

“I think it’s very important,” Stottelmyer said. “When we put the contract in place last year we made the case that we are going to change the status quo when it comes to compensation.”

“Basically what we do is [create] a combination of models and simulations … creating scenarios for military clientele and customers who give us situations that they want us to recreate or create videos for,” Roper said. “Then we take models and maps and recreate the scenarios that they need.”

He noted that programming these models is an intensive process. At the end of the presentation, before going into a closed session, the Board commended the students and faculty on the initiative.

“I’ll just remind you that if any of you create the next Call of Duty, Richard Bland would like a share of that,” Committee chair John Littel said.