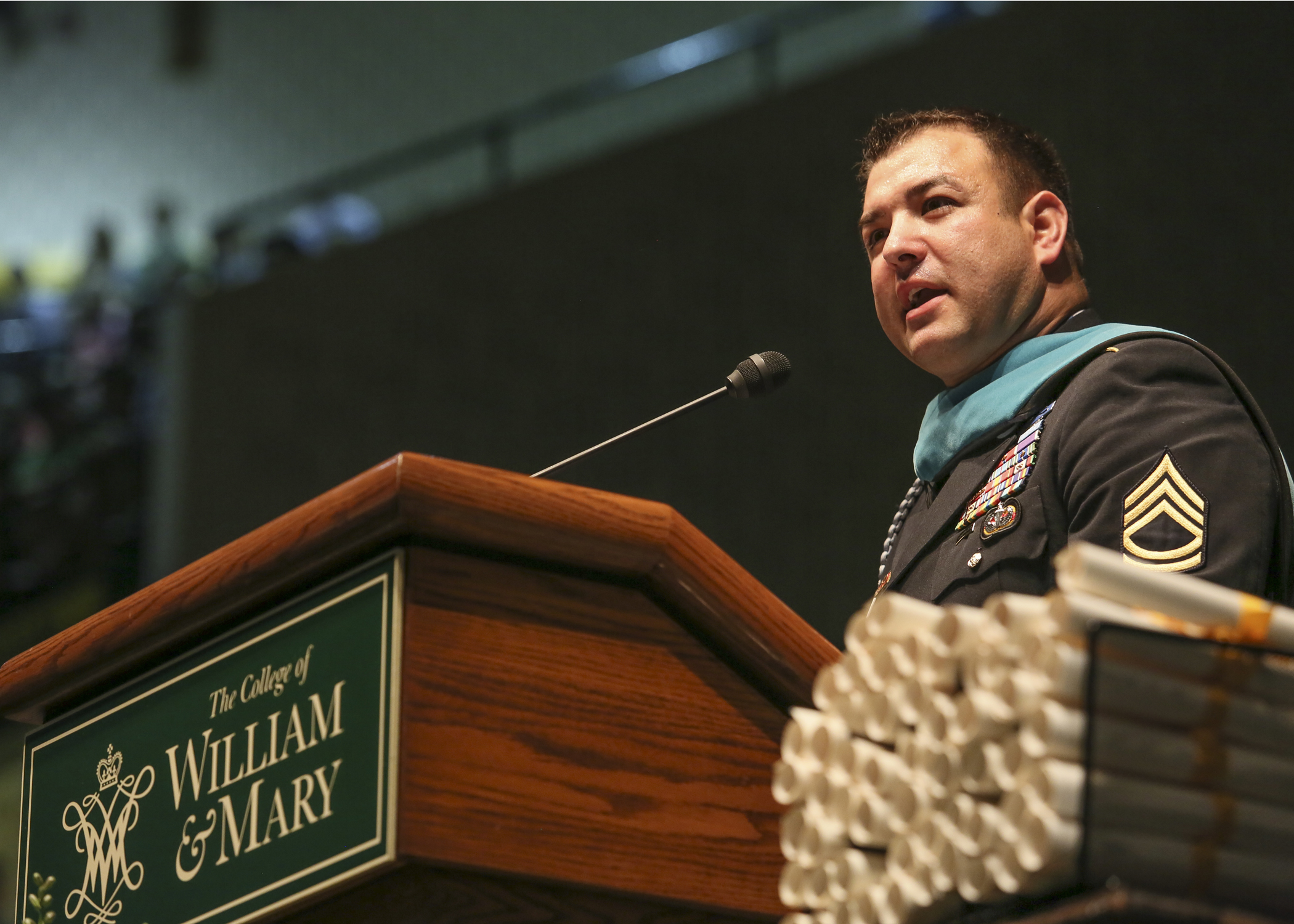 In a ceremony that featured remarks from both a Medal of Honor recipient and a U.S. Supreme Court Justice, the Class of 2014 graduated from the College of William and Mary May 11.

Sergeant First Class Leroy Petry, who received the Medal of Honor for his actions in a May 2008 mission in Afghanistan, served as this year’s Commencement speaker. U.S. Supreme Court Justice Antonin Scalia also briefly addressed the approximately 2,000 graduates gathered in Kaplan Arena.

Petry spoke of his own experiences serving in Afghanistan and Iraq, focusing on overcoming hardship and encouraging graduates to follow their dreams.

“At some point you will face what seems like a crushing setback or far-too-high obstacle,” Petry said. “It is at those times when you have the opportunity to stand out and show that you can handle the pressure and responsibility, take calculated risks and earn the respect of others. The degree you receive from William and Mary will be a testament that you earned your education. You didn’t win it, no one gave it to you.”

Over the course of his career, Petry said he has been fortunate to witness the positive attitudes of those injured in combat. Listing several examples of friends who suffered traumatic injuries, Petry described the resilience each person demonstrated in his or her recovery or willingness to continue to serve.

While Chancellor Robert Gates ’65 — who was also in attendance — described Petry himself as a hero, Petry mentioned that that heroes come in many forms.

“You do not need to be nationally recognized, rewarded or even acknowledged to be a hero to somebody,” Petry said. “Nor do you need to wear a uniform. … The fact is you have the ability to significantly impact others around you every day.”

Scalia also touched on the importance of being a good person in his remarks to the graduates.

“Brains are like muscles, they can be hired by the hour,” he said. “What can’t be bought is character.”

Petry and Alan B. Miller ’58, Chairman and CEO of Universal Health Services, received honorary degrees from the College during the ceremony.

Several students, staff and faculty members, as well as members of the community, were also recognized. Stephen Cameron ’14 received the Lord Botetourt Medal, which is presented to a graduating senior who exemplifies distinction in scholarship. Cameron maintained a 4.0 GPA throughout his time at the College, graduating with a bachelor’s in mathematics and a minor in physics.

The James Frederic Memorial Cup, given to a graduating senior demonstrating superior character and leadership, went to Gabe Manion ’14. Manion, a public policy major and economics minor, participated in research, served as a Student Ambassador for the Gloria and Sherman H. Cohen Career Center, held a leadership role in his fraternity and was involved with sexual assault prevention and education at the College.

Andre Buchheister Ph. D. ’14 received the Thatcher Prize for Excellence in Graduate and Professional Study, while Rachel Brooks ’14, Chase Koontz ’14 and Rev. John Maxwell Kerr were presented with the Algernon Sydney Sullivan Awards. These awards go to three people who have dedicated their time to helping others at the College.

Professors Elizabeth Canuel and John Moore were awarded the Thomas Ashley, Jr. Awards for Sustained Excellence in Teaching, while Ernest “Vinnie” Russell was presented with the Duke Award for his service as a College employee.

Following the presentation of the awards, student speaker Hannah-Lee Grothaus ’14 addressed the Class of 2014, asking the group to think about the Sheryl Sandberg quote, “What would you do if you weren’t afraid?”

“As we leave today, reflect,” Grothaus said. “Think about those crazy, just so ‘William and Mary you can’t even stand it’ moments. Think about all of the overcome failures that have now amounted to this huge success of wearing these caps and these gowns. Think about the Tribe of people you have standing behind you as you venture onward to whatever new challenges await. Ask yourself: What would I do if I [weren’t] afraid?”

Grothaus mentioned the challenges — academic and otherwise — life at the College entailed, but emphasized that her experience taught her how to fail and move on. She also described the community’s closeness and support over the course of her career.

College President Taylor Reveley echoed this sentiment, encouraging the Class of 2014 to remain invested in their alma mater.

“Once you’re a part of William and Mary, you’re always a part,” Reveley said. “Come back to campus often — You will always be welcome where the red brick walks extend as far as the eye can see.”