Home Opinions Under the gun 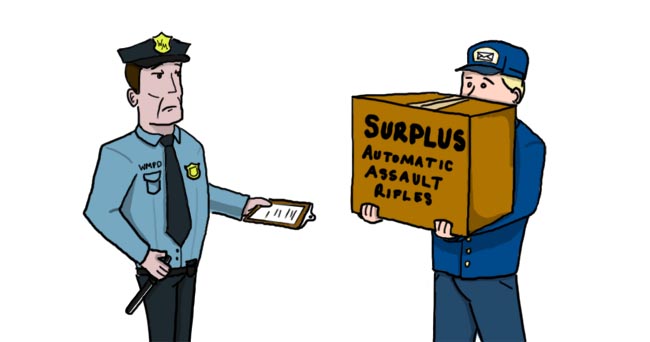 Between 2004 and 2008, both the Williamsburg and the College of William and Mary police departments received M16 assault rifles through the federal government’s 1033 program, which has been supplying military weapons to local law enforcement since 1990. While the weapons themselves are not a threat, neither the Williamsburg nor the College police department has a formal policy governing when officers can use these weapons.

The Williamsburg Police Department said it does not want to discipline its officers for drawing their weapons and, to some extent, that makes sense: Danger is often ambiguous, and officers need to protect themselves. We also understand that the Williamsburg Police Department wants to protect its officers, and it should. But leaving high-power assault rifles to be used at each officer’s discretion is dangerous and irresponsible. Without a formal policy, officers could theoretically use M16s in situations that do not require them, potentially killing someone. Though this is unlikely, it is possible.

Upperclassmen may remember when, two years ago, officials mistook a student’s stapler for a gun. Luckily, no one was hurt as a result of this mistake, but it’s clear that mistakes can happen — and if they do, official protocol should dictate how police officers act.

A written policy clearly explaining when officers can use M16s would eliminate ambiguity and could prevent tragedy. Police would be accountable to the public, and the public would know what to expect from its police officers.

The same goes for the William and Mary Police Department, which has four M16s. Lacking the money to convert the M16s to semi-automatic at this time, the College’s police department said that it will not use the weapons unless they are converted. But this, too, is only an informal policy.

When the U.S. Marines train to operate M16s, they spend six weeks in classroom training before they even fire the weapon. There are some differences between the weapons the Marines use and the M16s the College would use. For example, the Marines use automatic M16s. However, William and Mary police officers should receive more than the planned one or two days of training if they are to use such a powerful weapon.

It’s not the guns themselves that pose a problem. In the event of an active shooter situation, police should have those weapons at their disposal. But without lengthy training for officers, without a plan in place for the College police to convert its weapons to semi-automatic, and without a written policy regulating how and when the guns should be used, there is too much room for error.

The William and Mary Police Department needs to do one of two things: either convert the weapons to semi-automatic and create a policy dictating their use, or send the weapons back to the federal government. Should an active shooter situation occur, both the Williamsburg and College’s police departments have mutual aid agreements; if needed, there would be no shortage of M16s.

Students and local residents should be able to hold police officers accountable for their actions, and officers should know exactly what the law and their community expect of them. Official policies for the M16s would effectively eliminate these concerns.