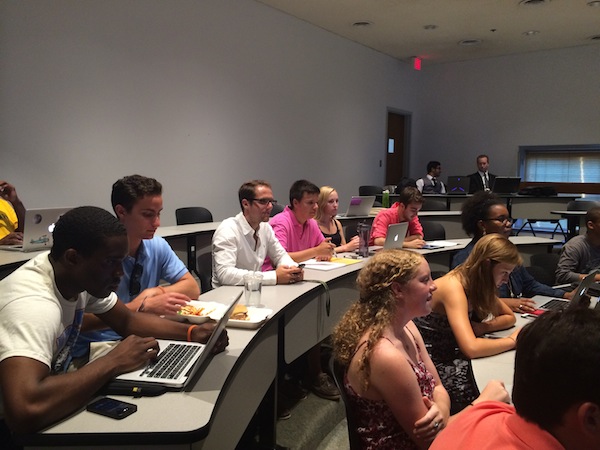 The bill, sponsored by Sen. Daniel Ackerman ’16, works to provide transportation to students traveling to the Northern Virginia and D.C. Metro areas during Fall Break.

A total of $6,000 is being allocated to provide two 55-passenger buses. Students will be charged $20 for a one-way ticket on the bus paid by cash, check or W&M Express. This means that if both buses are filled to capacity, the SA will be subsidizing $7 per ticket. The Senate anticipates to recover $4,400 from student payments.

Senators said there were some miscommunications regarding the scheduling of the buses last year, which led to the SA spending the full amount of the allocated funds. Ackerman explained that there should be fewer issues with transportation this year.

“This year obviously everything should be worked out just fine and we should see a huge amount of money be reimbursed,” Ackerman said.

While this is the second year that the SA will provide transportation to the D.C. area during Fall Break, this is the group’s first year sponsoring the transportation on their own. Last year, the SA co-sponsored the buses with the College of William and Mary’s Washington Office, but chose not to co-program this year.

Sen. Yohance Whitaker ’16 made a point to explain that the D.C. Office has chosen not to get involved with the Washington, D.C. Fall Break Act, because they felt the bill was unsuccessful.

“The reason that they are not co-programming with us this year is not because they deemed the program to be inefficient,” Whitaker said. “It was just because on their end, with the size of staff that they have … this was something they could not do.”

Sen. James Walker ’15 addressed the controversy brought up last year concerning whether the Student Assembly should be funding students’ rides home, since many students do not live nearby.

“Last year I remember we had the controversy of whether or not we should be paying for people’s rides home,” Walker said. “I know last year it was justified by the fact that we were helping the Washington, D.C. Office.”

Ackerman responded by saying that the SA does sponsor shuttles to local airports to help out-of-state students.

Sen. Seth Opoku-Yeboah ’16 discussed the Victorious Vans for Soccer Fans Act, which the Senate passed at its last meeting. He explained that the vans are up and running and so far about 15 people have used the service. Morey expressed his support for the bill and explained that continuing advertising for the free rides to Tribe soccer games is key.

“We do have 15 people using it right now, which is a good turnout for the first time. … I’m very happy with how this is going,” Morey said. “We have a big push for advertising planned for upcoming games. The students that I saw using it today had their faces painted; they were very happy that we had this free transportation. I see this as being a great success for the remaining games of the semester.”