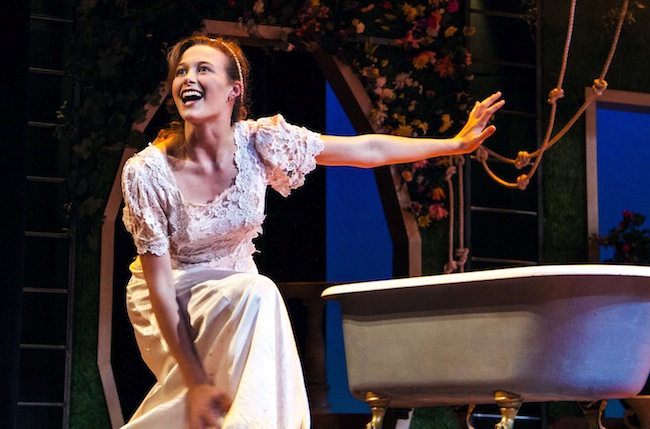 To love cannot be wrong, yet this most human of sentiments can often bring about the worst in us all. This weekend, William and Mary Theater brings to light the many complexities of love, sexuality and free will itself in its season opening production of “Big Love.”

Based on the work of Ancient Greek tragedian, Aeschylus, “Big Love” portrays the plight of a group of sisters forced to flee from their home in order to escape a forced marriage to their cousins. Upon seeking refuge in an Italian villa, they are confronted by their marauding grooms and must find strength in each other in order to determine how far they are each willing to go to secure their freedom.

The cast of “Big Love” emphasized each of the play’s highly relevant and onerous themes such as gender roles and domestic violence, with a modern twist and with tireless conviction. Despite impassioned and lengthy dialogue, all actors remained audible, with few exceptions. The ensemble skillfully transitioned between playful, romantic romps and violent confrontations to counterbalance the rare dragging moment. Fight choreography by Sunny Vinsavich ’15 lent dynamic elements to an already multifaceted production.

Sisters Lydia (Erin Lottes ’18), Thyona (Erin Owens ’17) and Olympia (Ivy Duerr ’17) represented three variations of modern womanhood in an exceptional manner. Their movements, motivations and delivery established each of them as unique characters while simultaneously raising questions about the definition of femininity and role of love and relationships.

Brothers Constantine (Tyler Bell ’16), Nikos (Joey Ernest ’16) and Oed (Christopher McDonnell ’18) strove to redefine the concept of masculinity, portraying the full spectrum of ideals ranging from the most extreme acts of misogyny to grasping with the prospect of emotional vulnerability. Their fervent episodes peppered the audience with poignant questions concerning social equality and traditional conventions.

The pairing of Eleanor (Tess Higgins ’15)  and Leo (John Kean ’16) served as one of the production’s few examples of a healthy, committed couple whose vivacious escapades about the stage added color and warmth to even the most chilling scenes. While the master of the house, Piero (Clive LePage ’16), struggled to forfeit his own well-being and that of his family to protect the sisters in their predicament, his mother and nephew, Bella (Christine Jacobs ’16) and Giuliano (Alex Mainardi ’16) echoed the more tender facets of family and lost love, bringing the narrative full-circle.

The production’s overall aesthetic was distinct and well executed. A light, airy balcony came to life complete with soaring greenery, stately columns, and an ever-shifting backdrop sky. The show’s soundtrack set the tone for numerous sequences with selections ranging from Lesley Gore’s “You Don’t Own Me” to Etta James’ “At Last.” With well executed sound effects, consistent hair and makeup, and fitting costumes that did not hinder actors’ full range of movement, the creative elements left a fresh polish on an ancient production.

William and Mary Theater presented “Big Love” with all the integral qualities of a modern theatrical production. The chemistry amongst the members of the small cast provided for an intimate experience befitting the show’s mature material. While “Big Love” certainly challenges the audience to leave the theater with a renewed perspective on love and gender, the production’s greatest assertion is that “life is nothing for us but an experience we share.”