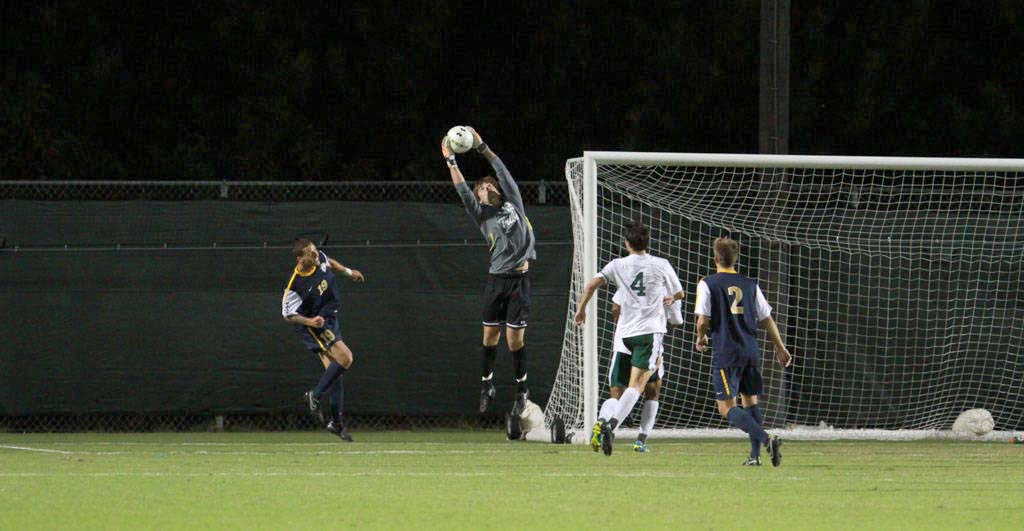 Junior forward Jackson Eskay said his team saw Saturday night’s match against Drexel as the start of a second season. Based on its performance Saturday, William and Mary could be poised for an impressive second chapter of its campaign.

“We’re trying to treat this as a second season,” Eskay said. “We’ve had some rough games, some tough results in our non-conference play, so we’re trying to come in with a clean slate.”

Head coach Chris Norris has tinkered with the team’s attack all season, searching for the right combination. Saturday’s arrangement showed promise as the Tribe repeatedly produced scoring opportunities and capitalized on them. The College’s three goals were its most in since the team’s 4-0 demolition of Pittsburgh Sept. 5.

“I think the big thing tonight was that we got some width from a couple of guys tonight,” Norris said. “Getting those guys out into a wide position was probably the most important thing for us offensively.”

The College struck early with a header goal from senior defender Michael Teiman in the 15th minute. Sophomore midfielder Chris Albiston put a corner kick, one of the Tribe’s five in the game, into the near side of the box where freshman midfielder William Eskay sent the ball to the other side of the box with a header. Teiman took advantage of the misdirection to smash the ball past Drexel goalkeeper Tyler Afflerbach for his second goal of the season, giving the Tribe a 1-0 lead.

The Tribe’s defense limited the Dragons to few chances during the first half and senior goalkeeper Bennett Jones was strong in goal. In the 37th minute, Dragons forward Michele Patala ripped a shot bound for the upper left corner of the Tribe net, but Jones was too quick, leaping for the save.

The College went into halftime after another goal, this time from senior forward Josh West. After a Drexel turnover, junior midfielder Ryan Flesch received the ball just past midfield, corralling it amidst three defenders before lobbing it up the field. West gained the ball in space for a breakaway. Setting up before defenders could reach him, West fired a shot past Afflerbach for his first goal of the season.

The Tribe stayed sharp following the break. The Eskay brothers in particular ensured the College’s consistent ball control and high-offensive tempo in the second half. William Eskay, who has shown immense potential so far in his freshman campaign, facilitated several opportunities for the Tribe attackers, while rarely turning the ball over in midfield. After the game, Jackson Eskay reflected on his brother’s recent progress.

“He’s been getting more confident in his game,” Eskay said. “[He’s] taking more responsibility for himself in terms of making chances, making runs, and so he’s been getting better each day.”

Jackson Eskay proved to be a menace for the Drexel backline, badgering away balls from defenders and evading pressure on the ball. The older Eskay finished with three shots on goal, one of which flew past Afflerbach in the 76th minute.

A panicked decision by the Drexel goalie to track down a ball outside of his box led to a stunning Tribe goal. Afflerbach attempted to clear a ball away from Jackson Eskay. But Eskay was able to take control of the ball right in front of the goalie, before shooting on an open net. Eskay’s shot came in just under the crossbar, over the heads of several defenders. The goal was Eskay’s first of the season, after leading the team last season.

The Dragons up-ended a possible shutout in the 88th minute as forward Jameson Detweiler slotted a goal-box shot past Jones, but by then the College’s victory was all but sealed.

The College will be seeking a winning conference record when it goes up against Elon at Martin Family Stadium Wednesday. The match is scheduled to begin at 7 p.m.

Alexandra Byrne - February 23, 2021
0
During a pandemic that has often been politicized, the nation’s public health officials have struggled to disseminate facts regarding COVID-19 amidst the multitude of...