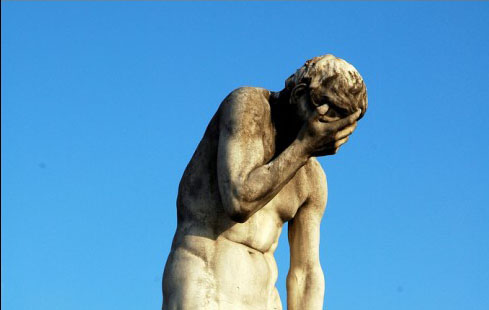 As we head into the depths of midterm season, four professors recount the worst failures of their lives. Emerging from health, academic and financial crises stronger than they entered, these professors gained experience and life lessons unlikely to be taught in a classroom.

At a time in our lives when everything seems up in the air, students of all academic years can relate to the feeling of uncertainty when it comes to planning for the future. As it turns out, Greg Smith, professor in the department of applied science, neuroscience program faculty affiliate, and the director of the bio-math initiative here at the College of William and Mary, was not immune to that same feeling when he was an undergraduate student forging his own path to graduate school.

“My parents were divorced in my sophomore year of college and it rattled me a little bit,” said Smith, “I was at MIT, and I did manage to finish with good grades, but just barely. There were a number of things I had to work out, psychologically and personally, and it took me quite a while to get my footing career wise.”

Unsure of whether he wanted to pursue medical school, Smith went on to teach high school for three years immediately following his time as an undergraduate biology student at MIT. Having been accepted to the Peace Corps only to have those plans change due to political unrest in his planned country, Smith was unsure of exactly what his future held. When he realized he was spending his free time reading science and mathematics books, Smith decided his future lay in graduate school and his interest lay in biotechnology.

In order to get the letters of recommendation that he needed, Smith took an entry-level laboratory assistant job at the University of California, San Francisco.

“It was an incredibly boring job, where I was doing the same, not-terribly difficult experiment over and over again every day. Because it was an epidemiological study, my job was the same every single day, and I just got terribly bored and ended up not performing really well.”

Smith spent a couple of years in the field, only to be fired immediately after receiving a promotion. What seemed like a failure at the time, Smith now notes, is responsible for putting him on the right track for something he really loved. After receiving a call from a faculty advisor at the University of California-Davis, Smith went on to pursue higher degrees in biophysics, something that he realized later was truly where his interests lay.

“I would say, more often than not, failure isn’t really failure, but rather a course correction,” Smith said.

Whether you’re dealing with a loss or just trying to navigate the labyrinth that is life, mental health plays a crucial part in the process. For Professor Cindy Hahamovitch, chair of the College of William and Mary’s Lyon G. Tyler Department of History, mental health played a huge role in her early life, especially in the realm of her professional publishing career.

When Hahamovitch, already a published author, set out to write her second book, life began to throw curveballs.

“I got cancer and spent a year with that,” Hahamovitch said. “Then, I got pregnant, which was a shocker, which was wonderful, except that I got a whopping case of post-partum depression after that which lasted for an unusually long amount of time. It ended up amounting to almost three years where it just seemed like this project would never get done.”

Despite her strongest efforts to complete the second book, Hahamovitch kept facing adversity.

“I worked on it all the time, but I tended to throw out almost everything that I did,” she said, “You seem brilliant when you’re writing it, but then you wake up the next morning and you read what you wrote and it seems like garbage and out it would go and this process just went on for years.”

The frustrating process continued for Hahamovitch. Only by working through it was Hahamovtich able to see that the problem was not in the research or the writing, but rather in the need to address and understand her post-partum depression before tackling anything else.

Twelve years later, through persistence and effort, Hahamovitch was able to recognize the issue, push past it, and finish her second book. The experience left Hahamovitch with a greater understanding of her life as well as the lives of others who may be going through a similar experience.

“These are issues that we see in many students and in ourselves,” she said, “Stress and anxiety is common and it’s important that those going through it get the help that they need.”

Being a student at the College of William and Mary comes with its own set of perks, with one of the most impactful undoubtedly being our access to some of the best faculty and professors in the nation. But when your professor is cracking down on your latest paper or challenging your beliefs in a class discussion, it can be hard to remember that they, too, were once in our shoes.

For professor Anne Charity-Hudley of the College’s Community Studies department, that very instance came in her senior year of her undergraduate career. As an undergraduate student, Charity-Hudley was involved in an extensive honors project on African American language and culture. She loved her topic, her advisor was excited about the material, and she had just spent the last two years researching and writing. Everything seemed on course for success.

However, when Charity-Hudley went to present her honors project for consideration, she got unexpected news: The board didn’t consider her area of study worthy of highest honors consideration. All of the work she had done for the last two years felt worthless.

“For me, this was a different type of failure,” said Charity-Hudley. “It wasn’t that I couldn’t do the work, but it was the fact that the things that I valued, the things that I was researching, weren’t worthy of the highest level of analysis. I remember thinking: ‘What does this say about me and the areas of study that I value?’”

Consequently, Charity-Hudley was faced with a tough reality. She had spent a huge amount of time working on this project only to have it disvalued by her peers. She believed in her thesis and was willing to transfer to another school to continue her work on something she believed in. Charity-Hudley was able to continue her studies in an area that she loved, going on to receive a PhD from the Univerity of Pennsylvania.

“I came to realize that different people are going to value different things,” she said. “You can see this as a failure, or you can take this as an opportunity to examine yourself and the things you value. You can take that sense of failure, externalize it and come to realize that ‘there may be a better place for me in this world.’ Sometimes all it takes is finding the right audience.”

The road to achieving our goals and aspirations can hardly be called an easy one — and more often than not, achieving such success comes only after having to pull ourselves up off the ground. For professor Christopher Owens, theatre department chair and associate professor of theatre at the College of William and Mary, it took just that.

As a young man, Professor Owens lived in Dallas with his wife and ran a successful theater company. However, the success of his theater proved to be short lived. When the oil market crashed in Texas, and one of his major sponsors crashed along with it, so did his theater.

“In a fairly short amount of time, my previously successful theater folded and I was out of a job,” said Owens. “I had just married some months beforehand and I had just bought a house. Everything seemed to be going along perfectly and then the bottom just dropped out. I had no job, limited prospects, and I couldn’t pay my mortgage payments. I ended up losing my house and went into bankruptcy and that was a pretty awful thing when you’re just married and trying to make your way in the world.”

But Owens chose to not give up. Looking for work, Owens thought outside of the box and started his own company.

“The theatrical market in Dallas was shrinking,” he said. “One of the major hotels there, Plaza America, was starting up a series of murder-mystery weekends. I went in and introduced myself, and offered up my skill set. I could write it, direct it, I could hire actors. I could help them market it. I’ll even share mailing lists that I had kept from patrons from my theatre. And they said ‘okay.’”

The murder-mystery weekends ended up being a huge success. Not only was Owens able to support himself, but he was also able to hire his wife as an actor — as well as other actors he had worked with at his company before it shut down. Bit by bit, Owens built himself back up.

Owens’s experience has left him with a two-fold approach to dealing with and learning from failure.

“First off, don’t deny it,” he said, “Something has happened that you need to mourn, whether that be a person or a relationship or an opportunity. Give yourself a timeframe to mourn, and then be done with it. Give it a deadline. And second, think about fear. Fear creates adrenaline and there is a strength that comes out of that adrenaline. If we realize that that is there, we can use it. ”

To listen to the professors’ stories in full, please visit the Flat Hat’s official Soundcloud page.