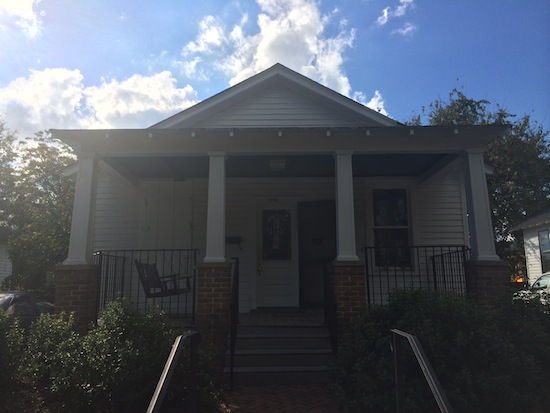 Upon entering the Meridian Coffeehouse, it’s easy to think you’ve suddenly been transported to Williamsburg, Brooklyn. Usually full of conversation, the Meridian’s main living room is reserved Thursdays for “open mic night.” Every couch is full, and people line the doorways, listening intently. Some even stand in the little library, dark and overwhelmed with books and novellas. Sitting just off campus at 206 S. Boundary Street, the coffeehouse, completely run by student volunteers, blends in with its neighbors from the outside. Once inside, however, it’s impossible not to notice the artwork on the walls, hanging from ceilings and even from the doorjambs.

All of the art — including the Elvis portrait hanging on the back wall, the abstract painting above the mantle, and the wired, circular piece covering a doorway — is student-made. The menu board, which is currently written in the International Phonetic Alphabet, changes often, usually when inspiration strikes and chalk is available. Before the IPA piece, Boba Fett’s face stated the prices (50 cents for everything). General Manager Alyssa Jerrell ’15 shares the history of the colorful piñata hanging from the middle of the ceiling.

“I found it in my [mom’s] car … and I was like, ‘she doesn’t need this,’ so I put it in the building,” said Jerrell. “That’s kind of how everything in there gets there.”

But the art doesn’t stop there. A second living room, situated at the back and accordingly named “the back room,” has its own kind of decoration.

“People did their community service projects by putting graffiti on our walls,” said Jerrell. “So it says, like, ‘get up’ and ‘think;’ one says ‘get up’ the other says ‘think.’ I really like those.”

For co-event manager Alaric Powell ’15, the Meridian is also a place for musicians and music lovers. “Open mic night” is more low-key, while additional shows most weekends host both on- and off-campus groups.

“We’re a venue trying to bring music that people want to see in Williamsburg, so we’re trying to do that as best we can,” said Powell. “We tend to do a pretty wide variety.”

Past shows have included jazz, folk, punk and screamo groups, sometimes in the same night. That wide variety is exactly what prompted Akshay Kumar ’17 to join the staff this year. While attending her first show, she was surprised to find that a place like the Meridian existed at the College of William and Mary.

“I generally liked the music,” said Kumar. “I liked that they had a nice mix of genres and types. I just really liked the place and the scene. Everyone seemed to be having a good time. People would just get up and dance around, not caring what other people think. It was fun.”

Traditions are big at the Meridian. Coming soon is “Grits Wrestling,” which includes people wrestling on tarps of hot grits. This tradition started over ten years ago for police brutality awareness. How that connects to grits wrestling, according to Jerrell, no one really knows.

“We have a lot of events like that,” said Jerrell. “Nobody’s sure why we do the things we do.”

In the spring, “Sky is Falling” is an all-day music festival put on at the Meridian, which includes six hours of music and food. It also hosts “Art Slam,” a competitive team art competition. Though for Powell, “competitive” is in heavy air quotes. Both events, open to the entire student body, aim to include a wider range of students on campus.

“My goal [as the] general manager is really to just open up the space; it’s pure potential as space,” said Jerrell. “We really want everyone in the campus community who would like to have access to an artistic space and that kind of community to really just take hold of it.”

Even on seemingly regular nights, there is something going on at the Meridian. Wednesdays are “Zombie Zensdays,” which showcase various horror movies. The “zen” comes from the meditation that follows the film (hopefully to prevent nightmares). After meditation, the “Black Sprockets,” the Meridian’s own cycling gang, go on a late-night ride around Williamsburg.

“I don’t like the idea of us just being like a close-knit group where everyone just doesn’t know anything about us,” said Powell. “I want people to know about the Meridian and to come there for the events, to just hang out and have coffee.”