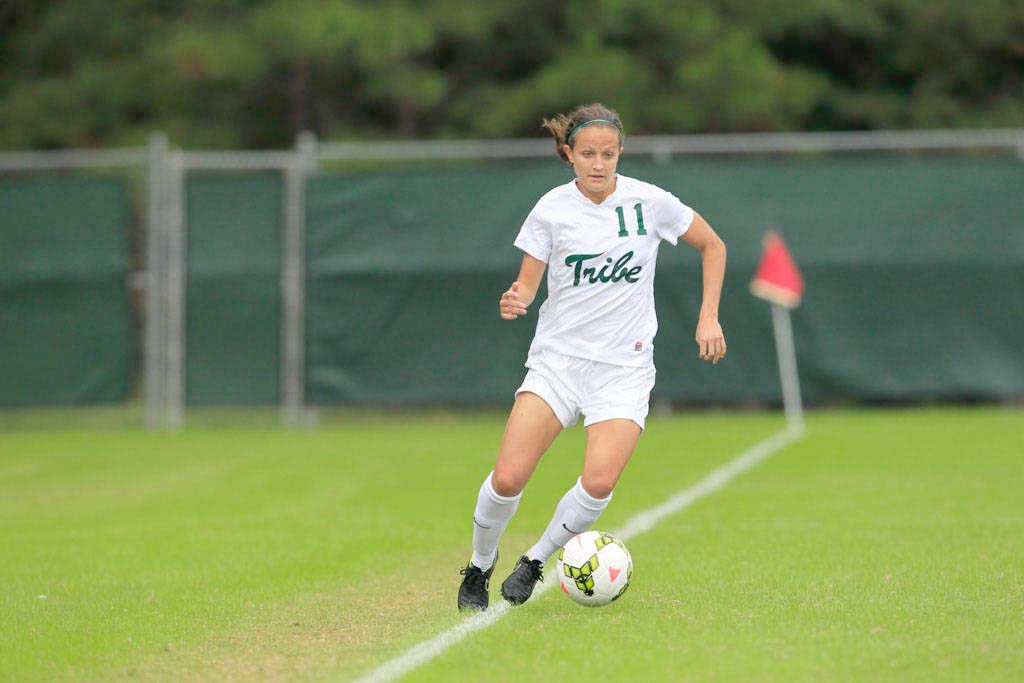 In the previous five contests combined, only four cards have been issued in William and Mary games. In under 90 minutes, that total doubled Sunday as the College downed Elon, 3-1, in what looks to become a rivalry matchup.

“I was disappointed with the slow start,” head coach John Daly said after the match. “It was certainly something we wanted to avoid with the senior day activities and Homecoming aspect.”

Sunday’s game, the last home game of the season, was also senior day. The team celebrated with a small pregame ceremony. The absence of injured junior forward Samantha Cordum, who ranks second on the team in points, may have contributed to the slow start.

The Phoenix (5-10, 1-6 CAA) struck first in the 9th minute off of a Tribe mistake, as a long ball was mishandled defensively. The ball hit awkwardly off of a Tribe defender and landed in front of an Elon forward with junior keeper Caroline Casey out of the net, resulting in an easy goal for the Phoenix.

“It was definitely a miscommunication, as she [Casey] called for the ball and we just didn’t respond well,” senior defender Emily Frederickson said.

It was all Tribe from then on, though. The College outshot Elon 16-4 the rest of the way.

Although the Phoenix keeper anticipated and blocked a shot by freshman back Haley Kent and a header by senior forward Emory Camper, the momentum began to switch back in the Tribe’s favor midway through the first half.

“Early in the first half, we didn’t move the ball quickly enough, we were too predictable and too obvious,” Daly said.

After a few close calls off crosses, the Tribe attack finally hit home in the 28th minute. A long pass to the far corner nearly skipped out of bounds, but Kent, on a full sprint, tracked it down and sent in a textbook cross. Camper jumped for the header and made contact, but the ball was blocked and bounced just in front of the goal. Freshman forward Sammi Grasso flew into the chaos, kicking the ball in for the score as she and the keeper tumbled into the net for the 1-1 tie.

Daly said he viewed the play as the game’s turning point.

“Once we tied it, then we started playing well,” Daly said.

Grasso nearly scored another goal four minutes later on a cross by senior midfielder Taylor Dyson, but the defender had a height advantage on Grasso, who stands at five feet, two inches, and headed the ball away. Elon had a similar chance off a free kick with eight minutes to play.

Just about everything that could happen took place in the 39th minute. Junior forward Katie Johnston crossed the ball high as one Tribe player mistimed the header and fell back. The defender, also airborne, jumped to block the Tribe attacker and instead crashed into the Elon keeper, flipping to the ground. The ball, untouched from Johnston’s kick, nearly rolled out of bounds from the wreckage, but freshman midfielder Rachel Moore, with almost no angle, sliced in the ball for the 2-1 lead. Elon’s head coach then received a red card for a hat-throwing tirade as the Tribe finished the half 2-1.

Elon’s assistant coach set the tone for the second half, earning a yellow card over the break. Events began to deteriorate on the field as well.

“It was definitely a very physical game; several of us were getting elbowed whenever the ref turned his back,” Frederickson said.

Play stopped when senior midfielder Aly Shaughnessy went down holding her midsection though she was nowhere near the ball. Although the penalty count was 7-6 in Elon’s favor, both teams played physically, with each team having a player receive a yellow card in the second half.

However, the College was able to overcome the rough play, adding an insurance goal in the 50th minute to extend the advantage to 3-1. Junior forward Lexi Irvin, who usually provides assists, dashed up the field to receive a textbook cross from junior forward Barbara Platenburg, and nailed in a hard shot for the score.

When asked how important it was to win this game on Senior Day, Frederickson and Daly had somewhat different answers.

“It was definitely huge to send out our seniors on a good note in our last home game. … We weren’t able to do that last year,” Frederickson said.

Daly’s answer was all business.

“This game was an important one to win, has nothing to do with last week’s loss or today’s events, but when you look at the conference standings, we’re trying to get to that bye week with a one or two seed,” Daly said. “With James Madison and Towson next week, it only gets harder. … We’ve got to come out and play well, we can’t be lackadaisical.”

The Tribe seniors recognized Sunday included Camper, Taylor Dyson, Frederickson, Anna Madden, Christina Popps, and Shaughnessy. Up next for the Tribe is a Friday matchup at James Madison. The game starts at 7 p.m.