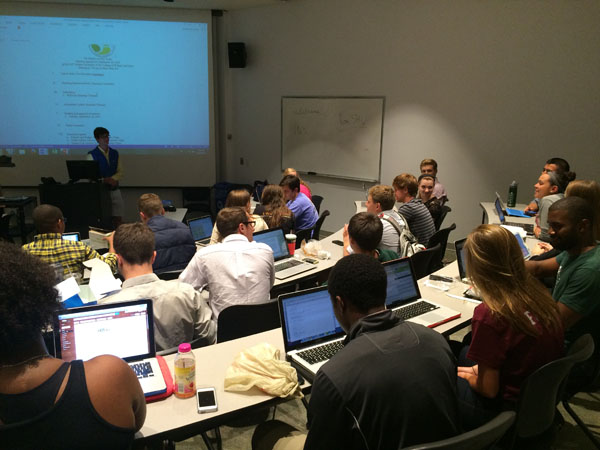 At their Tuesday meeting, the College of William and Mary Student Assembly Senate passed an activities and events request made by WCWM, the College’s student-run radio station.

WCWM requested a total of $4,300 from the SA to help fund their annual WCWM FallFest. The request had to be presented on the Senate floor per the Senate’s code, which dictates that any activities or events request over $3,000 must be voted on by the Senate as a whole, instead of just the Senate Finance committee.

WCWM FallFest’s aim is to bring the community together and to make more students aware of WCWM. The festival will feature two bands.

WCWM requested a total of $1,000 for each band and $1,300 to cover lighting, sound and a stage. The organization’s request is 15 percent of the act.

Sen. Chase Jordan ’15 raised concerns that the request was made to the Senate on too little notice. He also mentioned the fact that the bands are still unnamed.

“If this is such a big event and it’s going to cost us so much money, why are they coming to us so last minute? I feel like this cannot be planned between the 21st [of October] and the 1st [of November],” Jordan said.

Associate Director of Student Leadership and Development Trici Frederick, the SA’s advisor, clarified that WCWM has already begun planning the event, although they are just now asking the Senate for funding.

The Senate funded part of WCWM’s request last semester for their WCWM Fest in the spring.

The WCWM FallFest is meant to be a smaller event than its spring counterpart.

Sen. Emily Thomas ’17 also introduced the GOTV (Get Out The Vote) Act under new business at Tuesday’s meeting. The bill allocates a total of $192 for the SA Executive Department of Public Affairs to print election flyers and non-partisan candidate information. Thomas explained that the bill reflects the SA’s ongoing voter registration efforts.

“The Get Out The Vote Act … is pretty standard,” Thomas said. “It’s normally passed every year by the Senate, and basically this allocates money for the Public Affairs Executive branch to print non-partisan information about the candidates in our upcoming Congressional and Senatorial elections.”

In addition to funding, the bill ensures that all SA voter registration materials will be non-partisan and based upon information from the Virginia Public Access Project or the Virginia State Board of Elections. Chairman of the Senate Daniel Ackerman ’16 assigned the GOTV Act to the Senate’s finance, policy and public affairs committees.

The Senate also listened to several presentations during their meeting. Adam Wolfe J.D. ’15 updated the Senate on the Media Council, while Mallory Tucker ’15, Undersecretary for Sexual Assault Advocacy, presented updates on the SA’s subsidized STI testing.

According to Vice President of the Student Assembly Kendall Lorenzen ’15, there was an STI subsidy surplus last year of about $11,000.

Tucker also discussed the grand opening of The Haven, a new resource on campus  offering confidential assistance to community members in regards to sexual assault.

The Haven will be hosting an open house today from 3-6 p.m.

“A little over a year ago, I started meeting with Dean Haygood-Jackson, who’s our sexual assault response expert on campus, about the creation of a new center sort of barriers free zone where students can come to have questions answered about our policies related to sexual assault,” Tucker said.

The event is part of the week-long Celebrate You initiative.