Home Variety Behind Closed Doors You, your sex life and your parents 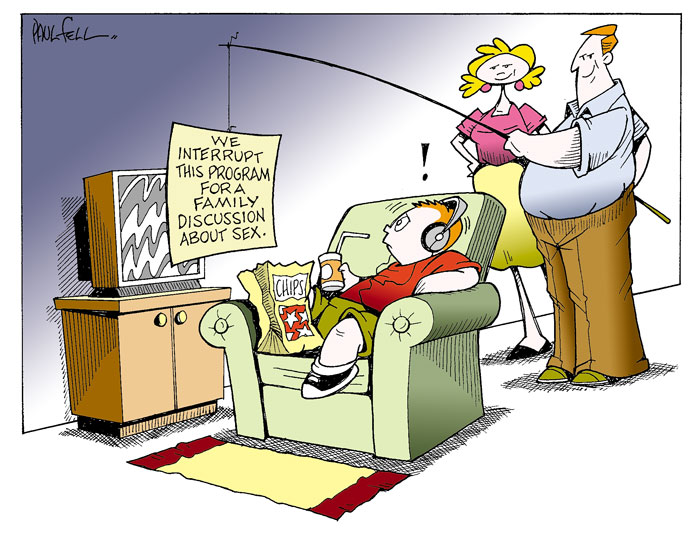 When it comes to talking about sex with your parents, everyone is different. For some, sex is not at all taboo; it’s just another topic of conversation. For others, the mere thought of discussing sex with their parents gives them heart palpitations. It’s easier for some parents to accept that their child is an adult who will eventually  have sex. Discussing your sex life with your family can be a big adjustment. As long as you’ve made responsible choices, you’ll probably find that opening up will help your parents see you as the adult you are.

You may have gathered from my position as sex columnist that I have a relatively liberal relationship with my parents about sex. Yes, they know I write this column. No, they don’t think it’s weird. It’s pretty much the same for my sister, too; she has a (pretty funny) college radio show about sex and relationships that my parents listen to every week. Sex is not a big deal in our household. I realize that it isn’t like that for many people, so I asked around about what it’s like to have “the talk” with your parents. Some reported having matter-of-fact discussions about safe and responsible sex, while some ignored the issue entirely. One respondent’s mother even cried. There’s a lot of variation, but having this discussion is vital. While it may be uncomfortable or even tense at first, it’s important that you attempt to have this conversation. Your parents may surprise you with how reasonable they are. Keep in mind that you’re an adult; living on your own gives you the freedom to make decisions about whether to have sex and how to go about it. Your parents may be relieved when you bring it up, since that gives them the opportunity to make sure that you’re adequately prepared to have safe sex. They probably realize that they no longer have a lot of control over the situation, and would rather you be open with them than engage in risky behaviors in order to hide the fact that you’re having sex.

Having “the talk” about safe sex can be particularly difficult for girls, because it often involves talking about birth control. Don’t let the uncomfortable nature of this conversation prevent you from protecting yourself against unplanned pregnancy or sexually transmitted diseases. If you’re mature enough to have sex, you’re mature enough to talk about going on birth control. If you need talking points other than contraception, you can bring up the many health benefits of birth control. Make an appointment at the Health Center (seriously, they are great), get informed, and go talk about it. You’ll be glad you did.

The decision to have sex is deeply personal, and your upbringing likely has a role in it. That being said, your values, not your parents’, are the ones that matter. You may not see eye-to-eye, and it may never get to the point where you can talk about sex openly. Your parents may still enforce their house rules and make you and your future fiance sleep in separate rooms even through your 30s. Ultimately, it’s important to talk about sex with them enough to get the necessary information and medical care needed for a healthy sex life.

If you still need to have “the talk,” find a friend, talk through what you want to say, have a few laughs at the awkwardness, and have them send you a pep-talk text when the time comes to approach your parents. Telling them what’s on your mind will probably be a little weird, or even somewhat strained, but it’ll undoubtedly be worth it.

Cate M. is a Behind Closed Doors columnist who loves talking about sexytimes with her super awesome family.