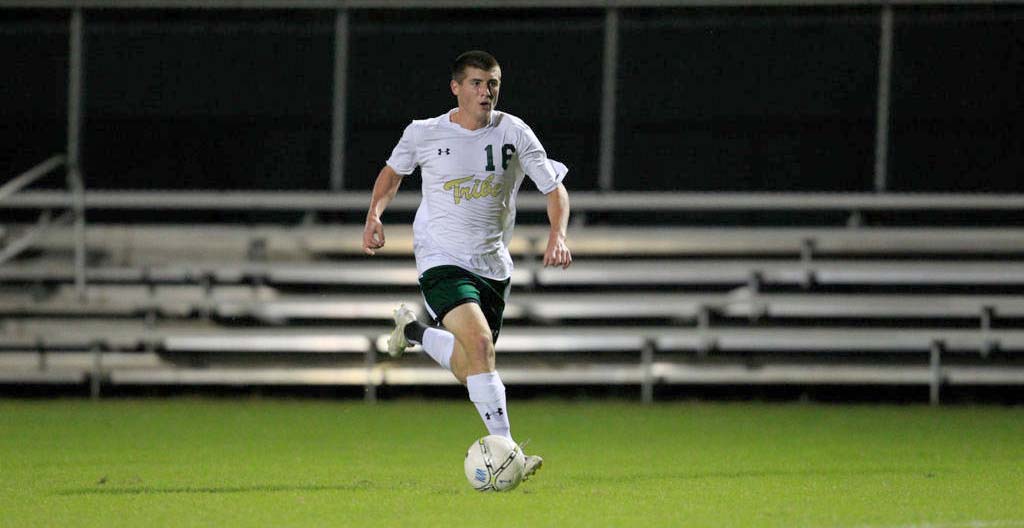 JMU entered the match on a two-game winning streak. Wednesday’s win pushed that streak to three games and secured the Dukes’ automatic bid into the Colonial Athletic Association tournament. Six teams compete in the CAA tournament and the winner advances to the NCAA tournament.

“JMU is a tremendous program,” head coach Chris Norris told Tribe Athletics. “Dr. Tom Martin, who is one of the top coaches in the history of college soccer, is in his final season and has had a tremendous career and has really built that program into a national contender at different times.”

Though the Tribe outshot JMU 4-3 in the first half, JMU outscored the College 1-0. JMU goalkeeper Kyle Morton and senior goalkeeper Bennett Jones each recorded three saves before halftime.

Sophomore forward Reilly Maw took the first shot of the match 13 minutes into the game, but his attempt went wide. Four minutes later, Maw took another shot, but Morton stopped it. The Tribe failed to score in the first half.

In the 37th minute, Jones blocked a shot from JMU midfielder Connor Cowell. The ball rebounded to fellow JMU midfielder Jonathan Barden, who scored the Dukes’ first goal in the 38th minute. The first half ended 1-0 in favor of JMU.

In the first few minutes of the second half, freshman defender Alfonso Speed converted junior midfielder Ryan Flesch’s corner kick into a shot; the ball hit the crossbar. Maw shot the rebounded ball, but Morton saved it once again.

In the 69th minute, senior midfielder Chris Albiston, assisted by senior forward Josh West, took advantage of a goalkeeper error and scored the Tribe’s first goal, tying the game at 1-1 with his seventh goal of the season.

Jones blocked a shot from JMU forward Josh Grant in the 82nd minute, but Barden took the rebound and scored his second goal of the game, giving JMU a 2-1 lead. After a corner kick from Flesch ended in a foul, the Tribe failed to get any shots, let alone goals, in the remaining minutes of the game, and the match ended with a 2-1 College loss.

JMU shot ten times over the course of the game, scoring twice for a shooting percentage of 20 percent. The Tribe had a total of seven unsuccessful shots: one hit the post, one missed its target, two were blocked by the defense and Morton saved the final three.

“We [had] a number of different goals heading into the season,” Norris told Tribe Athletics. “We haven’t performed in the way that we hoped to have performed for certain stretches of this year. One of the goals always is to make the CAA tournament.”

Before Wednesday’s game, the Tribe was ranked fifth in the league. With this loss, the Tribe failed to clinch the automatic bid into the six-team CAA tournament. However, the College still has a chance, depending on how the rest of the league’s regular season games turn out. The Tribe will learn its fate when CAA play concludes Sunday.