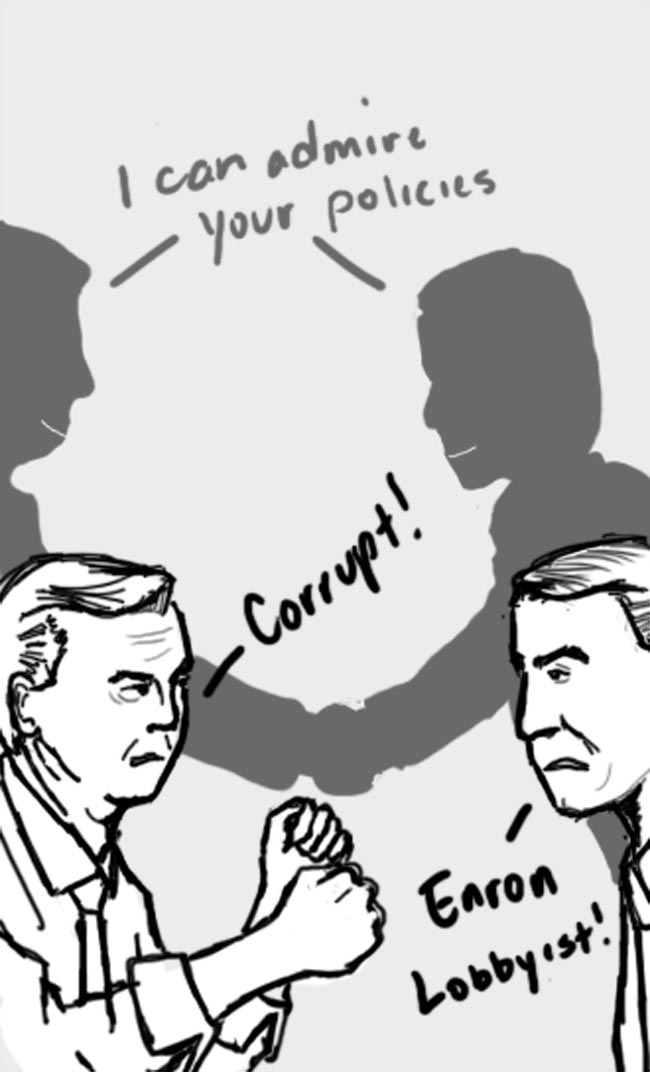 Virginia should be proud to host a Senate race between two serious candidates — Democratic incumbent Mark Warner and Republican Ed Gillespie — both of whom are willing to go across the aisle to solve issues. But this fact makes the political season’s array of misleading ads even more of a travesty.

The Warner campaign has made an effort to write Gillespie off as a run-of-the-mill partisan. Consider this line from an ad: “[Gillespie] specialized with dirty tricks as a partisan operative.” Rather than alluding to former KGB service, this comment referred to Gillespie’s lobbyist firm having Enron as a client.

Lobbyists certainly aren’t the most popular people in the public eye, but lobbyist for Enron is an exceptionally unappealing profession to hold prior to running for office. The connection, however, is overblown. “The Washington Post” noted in an Oct. 22 article that Enron fooled an entire industry of finance experts, as well as the majority of people working in Enron. With no evidence against Gillespie and his indirect connection, it’s hard to believe that he had any knowledge of the accounting fraud. Most people working for Enron were clueless. Of course, Enron isn’t the former client you want listed on your resume, but Gillespie was more like an outsourced janitor on the Death Star than Emperor Palpatine.

Yet the Warner campaign stated, “The facts of the ad are accurate.” Not really.

The dirt thrown by the Gillespie campaign has an issue or two as well. With the Virginia Senate at a 20-20 split, Democratic State Senator Phillip Puckett decided to resign so that his daughter could become a juvenile court judge. Virginia law bans judges from having familial relations with sitting senators.

Warner and Governor McAuliffe spoke to Puckett privately, trying to convince him to return to state office. Later in the conversation, Warner and Puckett talked about potential career paths for Puckett’s daughter. Warner made suggestions but no explicit job offers.

While I don’t like senators talking to state senators about how the latter really should stay in office — and then in the same conversation mentioning job possibilities for family members — we have to presume innocence. Gillespie, sensing the public wasn’t thrilled at the news, launched an ad that involved the word “bribe.”  Except bribery never really happened.

On the bipartisan, non-advertising front, Gillespie and Warner are actually close competitors. Warner has worked on student loan legislation with Republican Marco Rubio, while Gillespie is in favor of over-the-counter contraceptives. Warner worked with Republican Robert Whitman on a Chesapeake Bay Accountability Act, and Gillespie advocates keeping veteran co-pays for healthcare low. Gillespie also offers an alternative healthcare plan, something the Republican Party has struggled to do.

While Warner has the advantage of a voting record, he also holds the disadvantage of a voting record. According to Politifact, Warner voted with Obama on 97 percent of issues. While some votes were likely meaningless procedure, Warner did cast the deciding vote in Obamacare, and it’s hard to dispute that he has shifted away from the center more frequently during his time as senator than his time as governor.

Contrary to popular wisdom, this race isn’t a surefire Democrat against a lockstep Republican. It’s a race between two candidates who are capable of compromise, which is something Virginians should appreciate. Don’t let the ads mislead you.