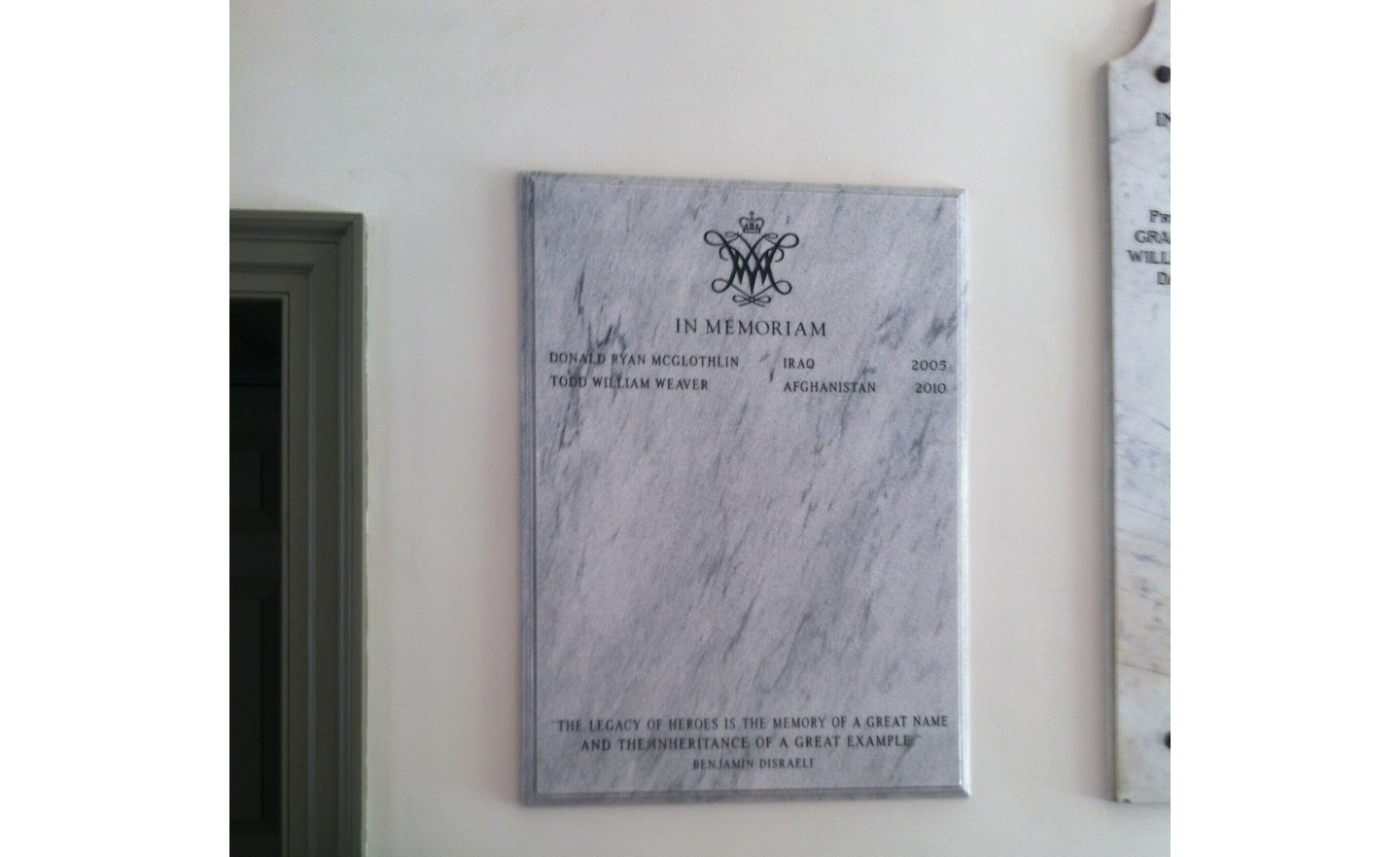 On Saturday morning Nov. 8, the College of William and Mary dedicated a plaque in the Central Hall of the Sir Christopher Wren Building to 1st Lieutenants Ryan McGlothlin ’01 and Todd Weaver ’08, two alumni who were killed in action while serving in Iraq and Afghanistan, respectively.

McGlothlin and Weaver’s plaque accompanies five other plaques dedicated to the 215 students and eight faculty who fought and died in the Revolutionary War, Civil War, World Wars I and II, the Korean War and the Vietnam War.

“Today we dedicate a sixth plaque to honor two members of the William and Mary family who have fought and died in more recent conflicts,” Reveley said. “And we now place the names of Ryan McGlothlin and Todd Weaver in their rightful place among their brothers-in-arms, part of William and Mary’s most sacred wall, and on this wall their names will be remembered for as long as there is a William and Mary.”

“A World War I poem reflects the idea behind this sacred hall, and William and Mary’s commitment to all who serve and sacrifice”

“How much we all wish that there was no reason to be here today,” McGlennon said. “For the McGlothlin and

the Weaver families, how much happier would they be to have Ryan and Todd with them, for the faculty who taught and worked with these young men, who challenged and encouraged them, and who saw so much actual and potential accomplishment, how much more satisfying to have these young soldier scholars to still be learning and pushing the boundaries of knowledge. I didn’t know Ryan, but my friends and colleagues Dick Kiefer and Bob Orwoll of the chemistry department worked with him closely, and according to Dick, if he wasn’t the top student, he was certainly near the top, [and] my colleagues in government and I agree, that Todd was one of the very best in his class. The nominating committee of Phi Beta Kappa acknowledged that, electing both men membership in this historic chapter.”

Kimbrough spoke last and told the crowd of the circumstances of McGlothlin and Weaver’s deaths. Kimbrough said that McGlothlin joined the marines following the 9/11 attack, and was ambushed while leading his platoon in Iraq. During the ambush, McGlothlin braved enemy fire and grenade blasts to save his fellow marines, eventually suffering a fatal wound.

Weaver was deployed to Kandahar, Afghanistan and served with the 101st airborne division. While leading his platoon from the front, he triggered an improvised explosive device which mortally wounded him, but in doing so he protected the 30 soldiers in his platoon from injury.

A reception in the Wren Building’s Great Hall followed the dedication of the plaque, during which time McGlothlin and Weaver’s parents spoke to those in attendance, thanking them and speaking about their sons’ experiences at the College.

“A World War I poem reflects the idea behind this sacred hall, and William and Mary’s commitment to all who serve and sacrifice,” Don Weaver, Todd Weaver’s father said. “It simply says in one stanza and one line, ‘a soldier only dies if they are forgotten;’ Todd and Ryan will not be forgotten.”

The plaque containing Weaver and McGlothlin’s names can be viewed in the Central Hall of the Sir Christopher Wren Building, along with other alumni who have died in the service of their country.