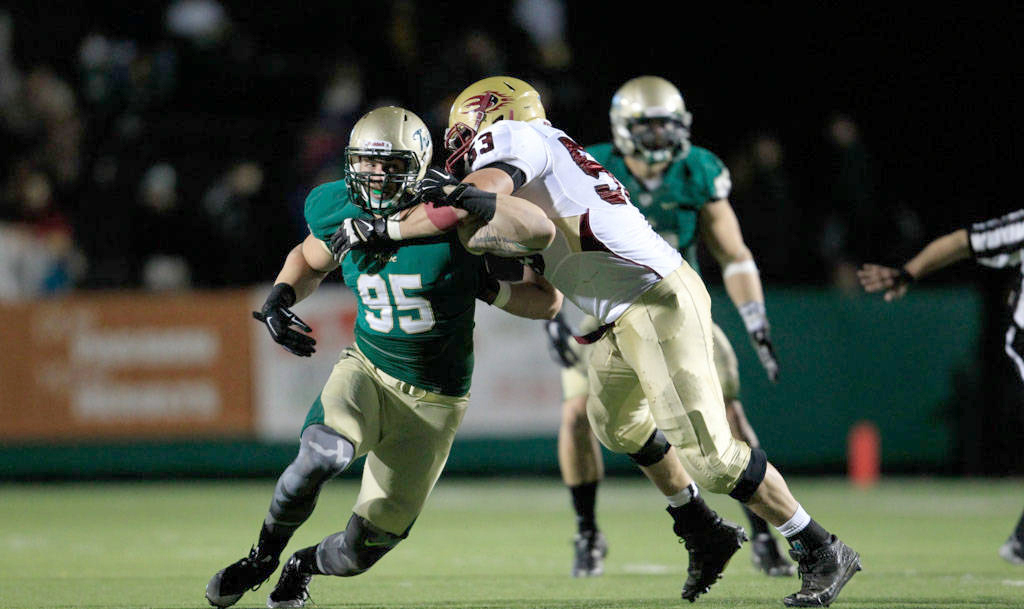 William and Mary (6-4, 3-3 CAA) defeated Elon (1-9, 0-6 CAA) 17-7 Saturday afternoon at Zable Stadium. The game marked the first ever meeting between the Tribe and Elon, which joined the Colonial Athletic Association this year.

The Tribe, coming off a road loss against James Madison last week, came into its penultimate home matchup looking for a much-needed conference win late in the season. The College achieved that goal with a solid performance on both sides of the ball.

After the teams exchanged three punts, sophomore running back Kendell Anderson scored a 23-yard rushing touchdown, giving the College a 14-0 lead in the second quarter. After Elon reached the red zone for the first time in the game, senior safety Ivan Tagoe intercepted Elon’s Mike Quinn after the ball was tipped by freshman safety Keanu Reuben. On Elon’s next drive, Quinn made another error, and senior linebacker Airek Green intercepted the errant pass, returning the ball 39 yards to the Elon 32 yard line. Carpenter nailed a 32-yard field goal a few plays later for a 17-0 Tribe lead entering halftime.

After exchanging punts for five possessions, Elon’s Demitri Allison scored a 26-yard passing touchdown late in the third quarter, bringing the score to 17-7. The Tribe attempted a 35-yard field goal, but Wright came up with his second block of the day.

In the fourth quarter, Elon’s hopes appeared to disappear when Quinn threw an incompletion on fourth down with the score still 17-7. However, unsportsmanlike conduct was called on senior defensive tackle Jasper Coleman, giving Elon a first down near the end zone and new life. Fortunately, the Tribe defense held firm, and Gallagher was forced to attempt a 20-yard field goal. The stadium roared as Coleman blocked the kick, earning the tenth blocked kick of the season for the Tribe and crushing Elon’s comeback bid.

“We kept shooting ourselves in the foot with the penalties. … We gave it all we had and came up with the blocked kick,” Coleman said.

After Elon and the College exchanged punts, sophomore quarterback Steve Cluley hit senior receiver Sean Ballard for a fourth down conversion, putting the College on the Elon 13-yard line with 90 seconds remaining. Cluley then took a knee on consecutive plays to seal the win. Head coach Jimmye Laycock said he was pleased with his team’s performance at the end of the contest.

“We kept it at a two score game which gave us a little cushion, and I was pleased obviously at the end; we were able to finish it off there on fourth down with the completion and not have to play anymore,” Laycock said.

The key to victory was a balance of offense and defense. In both halves, the Tribe was sharp offensively, with 218 yards in the first half and 195 in the second. The College rushed on 63 percent of its offensive plays and most of the passes were short, demonstrating a conservative offensive game plan.

Cluley completed 18 of his 28 passes, throwing for 167 yards. He didn’t throw a touchdown, but also didn’t commit a turnover in a steady performance.

The Tribe’s rushing game was essential to Saturday’s win. The College accumulated 246 rushing yards, twice as much as Elon’s 121. Abdul-Saboor led the way, finishing with 189 yards to bring his season total to 1020.

The Tribe sits at sixth in CAA standings with two games to go in its schedule. Even with wins in the last two games, playoff chances are slim.

“A CAA win at this stage of the season is something we’ll take. … Even though it may not have been the prettiest thing … we’ll take that and run with it and try to correct some mistakes,” Laycock said.