The men’s program earned two third-place results across four matches, while the women earned one third-place finish through five matches.

The women started the fall season well, placing third in the 14-team Bucknell Invitational and fifth in the 13-team William and Mary Invitational. The Wyoming Desert Classic (12 of 16) and Nittany Lion Invitational (11 of 14) provided the lowest finishes of the season. In its last match, the Tribe earned a fifth-place finish among a field of 18 at the Lady Pirate Intercollegiate.

With the fall campaigns complete, the College continues play in February. The men will compete at the Wexford Plantation Intercollegiate, and the women will continue their season in March at the Kiawah Island Intercollegiate.

William and Mary, led by head coach Tess Ellis, finished the 2014 season with an overall record of 7-12-0, falling to Delaware 4-1 in the Colonial Athletic Association semifinals.

While it was predicted that the Tribe would finish in sixth place, the College finished third in the 2014 CAA standings. Senior forward Emma Clifton, who served as team captain along with red-shirt senior Jesse Ebner, led the team in assists and shots, while junior forward Pippin Saunders led in points (23) for the third year in a row. Saunders also scored a career-high total of 10 goals during the season.

Six athletes were included on the CAA All-Conference teams. Ellis — in only her second year as coach at the College — was named one of the CAA’s Coaches of the Year for the second time in a row.

The Tribe opened the season with a 9-0 loss to No. 6 Virginia and continued to face highly-ranked opponents. Despite a five-game losing streak toward the beginning of the season, the College was able to gain momentum by October. A successful trip to North Carolina, which saw victories at Appalachian State and Davidson, was followed by a home shutout against Towson. The Tribe continued to play well up to and through the CAA tournament.

Six athletes were included on the CAA All-Conference teams. Ellis — in only her second year as coach at the College — was named one of the CAA’s Coaches of the Year for the second time in a row.

The Tribe loses eight seniors in the coming season but adds seven incoming freshmen to the roster.

William and Mary finished the year at 7-24, with a 3-13 ledger in the Colonial Athletic Association.

The team’s best performance of the year came at the Patriot Invitational, an early season tournament hosted by George Mason. The College played three games, winning two. The Tribe won an impressive 3-2 match over Lehigh, a team that won more than 20 games during its season.

Junior Dessi Koleva led the team with 300 kills, averaging almost three kills per game with a 0.158 kill percentage. Koleva also led the team in points, finishing the season with 341.5.

Sophomore Stephanie Paul boasted the highest kill percentage of the year at 0.333. Paul also led the College in assists with 447. Junior Carolyn Albright had a team high 114 blocks and averaged over a block per set.

Despite its struggles, the Tribe’s youth sets the squad up for a promising campaign next season, which will be head coach Melissa Shelton’s ninth season with the College.

Although William and Mary stood in second in the Colonial Athletic Association with a 10-2-1 record in early October, the College’s final 12-6-1 mark can hardly be viewed as a disappointing late-season collapse.

The 2014 season marked head coach John Daly’s NCAA-record 34th straight winning season, which ended in the semifinals of the CAA tournament after a combination of bad luck and injuries halted the Tribe’s midseason momentum.

In the first two months of the season, the Tribe repeatedly steamrolled comparable opponents. Firing on all cylinders, the Tribe attack stood among the CAA’s elite, led by junior forward Samantha Cordum and senior forward Emory Camper. The explosive pair combined for 17 goals and eight assists on the season, Camper leading the total point category with 23.

However, Cordum’s injury eleven minutes into the 3-2 Oct. 12 overtime loss against Drexel cost the Tribe one of its most valuable weapons. Although junior midfielder Leci Irvin and freshman Sami Grasso stepped up admirably, the Tribe couldn’t find its previous productivity on offense, managing only three goals in the final three regular season games en route to a 1-2 slide. Daly’s adjustments to formation and personnel seemed ineffective.

The 2014 season marked head coach John Daly’s NCAA-record 34th straight winning season, which ended in the semifinals of the CAA tournament after a combination of bad luck and injuries halted the Tribe’s midseason momentum.

For a team that had racked up a 37-24 goal differential, a one-and-done in the playoffs looked to be a very possible reality after such a promising start. Defensive mistakes, such as the accidental ricochet goal in a 1-0 loss at James Madison, further complicated the College’s postseason hopes.

However, the fourth-seeded Tribe overcame Drexel in the first round of the CAA playoffs with a 2-1 victory. Daly’s adjustments paid major dividends as the Tribe racked up 16 shots to Drexel’s eight.

Defensive mistakes doomed the Tribe’s upset bid against Northeastern, as the Tribe fell to the eventual CAA champion Northeastern by a 4-0 margin.

After the 2013 squad garnered a ranking of 22nd in the nation with an impressive 11-5-3 record, William and Mary hoped to build off of last year’s performance heading into 2014. However, with a final record of 6-11-1, including a 3-4-1 record in the Colonial Athletic Association, the College regressed from championship contender to the bottom of the conference, finishing seventh out of nine. 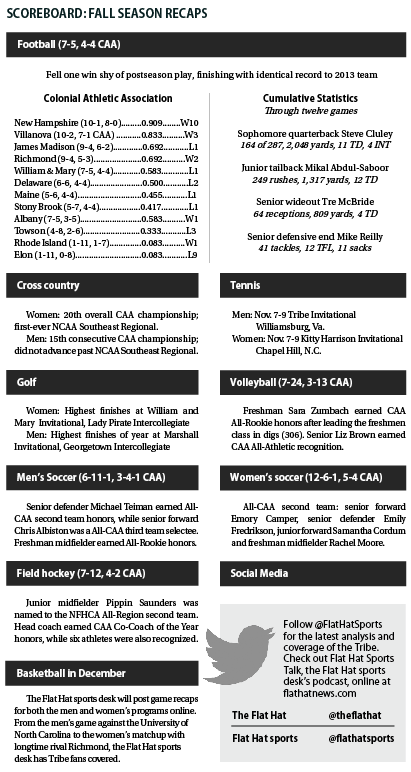 The free-fall was hardly expected on paper. Six seniors graduated after the 2013 season, including two backs and a goalkeeper, although the offense stayed mostly intact on roster — returning eight starters. Pre-season polls ranked the Tribe as third in the conference. A drop from a bid to the NCAA tournament to not even making the conference tournament seemed unthinkable.

However, the College lost standout defenders Will Smith and Roshan Patel to graduation, and relied upon a defense that was decimated by graduation. This year, the Tribe’s defense declined, allowing 26 goals over the course of the season. Similarly, the offense underperformed, scoring just 20 goals on the season — a 36 percent drop-off in production.

Some season positives shined through, however. Despite initial questions regarding the starting goalkeeper, senior Bennett Jones stepped up to the occasion, finishing with a 0.712 save ratio.

While 2015 appears daunting as the Tribe graduates nine seniors this year, head coach Chris Norris hopes to get the Tribe back on course. He’s done it before — 2012’s four wins became eleven in 2013 — but this year’s disappointment leaves some room for doubt.

William and Mary sprinted to another successful season, as the men’s and women’s teams each captured a Colonial Athletic Association Championship. The women went on to capture the first National Collegiate Athletic Association Southeast Regional Championship in program history and finished 17th in the NCAA National Championship. The men’s team also advanced to the Southeast Regional, finishing 12th, but failed to qualify for the NCAA finals.

Junior Carolyn Hennessey was the College’s standout performer. The Herndon, Va. native finished first overall at the CAA Championship and second overall on the Southeast Regional to lead the pace the Tribe to victory. Hennessey also won the Tribe Invitational and was named CAA runner of the week three times.

Junior Emily Stites managed to stand out among the Tribe. After missing most of the season due to an injury, Stites returned for the Southeast Regional, finishing 25th, then, placed 36th in the NCAA finals. In the process, Stites earned the fifth All-American honor of her career. Stites is the fourth woman in the Tribe’s history to garner five or more All-American awards.

Freshman Regan Rome had a sharp first season for the College, finishing 10th among all rookies in the NCAA final and leading all rookies with her fourth place finish in the CAA Championship. Rome also won her first race of the year with a victory in the University of Richmond’s Spider Invitational. Likewise, senior Dylan Hassett performed well, placing 15th in the Southeast Regional and earning All-CAA honors for the third consecutive season.

Junior team captain Ryan Gousse led the Tribe men, finishing second overall at the CAA Championship and leading the College with a 47th overall finish at the Southeast Regional. Sophomore Trevor Sleight also played a crucial role, earning All-CAA honors with a ninth overall finish in the CAA Championship. Sleight finished first among all Tribe runners in the College’s first four meets, opening the year with victories at Richmond’s Spider Invitational and the Tribe Invitational.

The College’s successful cross country season followed what has become a regular pattern for the Tribe runners. The men’s team’s title was its 15th straight, and the women’s title was its third consecutive and 20th overall. The College will look to build on its success next season, where it will attempt to defend its dual titles for the fourth straight year.

At a glance, William and Mary’s season is roughly a repeat of last year, as the Tribe again ended up 7-5 and finished with a loss to conference rival Richmond in the season finale, 34-20. The Tribe missed the playoffs for the fourth consecutive year.

Opening the season at Virginia Tech, the College ranked No. 19 in the Football Championship Subdivision and remained in the top 25 throughout the season, finishing at No. 23. The Tribe reached as high as No. 10 in the FCS for the first time since 2011 following the College’s overtime win against Stony Brook Sept. 27. The College finished fifth in the Colonial Athletic Association, falling one win short of a playoff berth.

Head coach Jimmye Laycock gave sophomore quarterback Steve Cluley the starting job for the opener at Virginia Tech, and Cluley started all 12 games, throwing for 2,048 yards and 11 touchdowns, completing 164 of 287 passes and only tossing four interceptions.

In offensive coordinator Kevin Rogers’ second year, the offense was sixth in the CAA in scoring, but scored 20 or more points in nine of its twelve games. This is an improvement from 2013, when the Tribe scored 20 or fewer points in eight games. The Tribe made 20 field goals, the most of any CAA team, and had the second highest conference field goal percentage at 76.9 percent, led by senior kicker John Carpenter.

Despite the College’s ranking as eighth in rushing attack in the CAA, junior running back Mikal Abdul-Saboor led the conference rushing with 1266 yards and 12 touchdowns. Abdul-Saboor rushed for over 100 yards in seven games, providing the motor for the program’s offense. Senior receiver Tre McBride led the team with 64 receptions for 809 yards and five touchdowns.

Former defensive line coach Trevor Andrews took over as defensive coordinator before the season began. Under Andrews, the Tribe had the fifth-ranked scoring defense in the conference, allowing an average of 22.7 points per game. However, the College defense allowed at least one touchdown in each game.

The College will return to action next season, with Cluley, Abdul-Saboor, Houston-Carson and Rhodes.