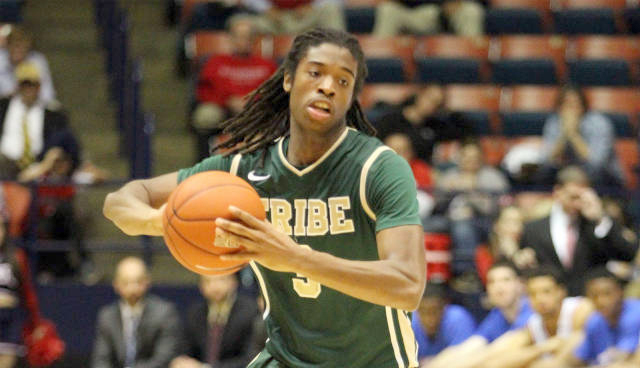 With 37 points on 14 of 18 shooting, senior guard Marcus Thornton was unstoppable for William and Mary Wednesday night. But the effort just wasn’t enough for the Tribe, as Richmond defeated the College 68-67 in Richmond, Va.

The game was close throughout, and the Tribe had a chance to win on sophomore forward Omar Prewitt’s three-pointer at the buzzer. Prewitt’s shot just barely rimmed out, and Thornton’s career night came in a loss.

Thornton’s 37-point effort is the highest scoring performance of his career, and the most points scored by a Tribe player in a single game since 1990. However, the seven other Tribe players who took the court combined for just 30 points, with 12 coming from sophomore guard Daniel Dixon. Prewitt finished with four points, five rebounds and four assists, but missed five of seven shots. Junior center Sean Sheldon pitched in seven points and seven rebounds.

Thornton’s 37-point effort is the highest scoring performance of his career, and the most points scored by a Tribe player in a single game since 1990.

The College struggled in other areas as well. The Spiders forced 18 Tribe turnovers while only surrendering 11 of their own, and Richmond made 20 free throws against the College’s seven. Those two statistical advantages made the difference for the Spiders, who withstood the Tribe’s onslaught to the final whistle.

The game appeared disastrous for the College in the first half, as the Tribe misfired on multiple early shots and Richmond built a 14-7 lead 10 minutes before halftime. At that point, Thornton took over the game, pouring in 18 of the Tribe’s final 23 first half points to bring the Tribe to halftime with a 38-33 deficit.

Thornton immediately continued his hot streak in the second half, hitting a three-pointer in the opening minute to cut the Spiders’ lead to 38-36. The College and Richmond matched points throughout the entire second half, and the game was tied at 63 with four minutes left.

At that point, the contest tilted Richmond’s way. The Spiders scored a tip-in basket and three free throws to counter two Tribe free throws and stretch Richmond’s lead to 68-65 with a minute remaining. However, Prewitt hit a fadeaway jumper to pull the Tribe within a point, but missed a free throw that would have tied the game at 68. Instead, Richmond corralled the rebound, eventually drawing a foul with four seconds left.

Though Trey Davis missed both free throws for the Spiders, Prewitt’s 28-foot buzzer beater fell short, and the Tribe’s 68-67 defeat was sealed. The loss is the Tribe’s first since its season opener against Florida.

The Tribe returns to action when it travels to face High Point Saturday at 7 p.m. The College will then take a two-week break for final exams, followed by a home game against Washington College Dec. 19 at Kaplan Arena.