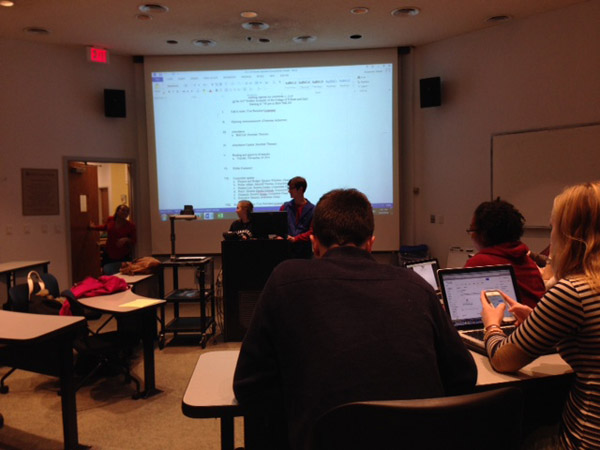 “Fiscal responsibility” was the buzzword of the night at the Student Assembly Senate’s last meeting of the semester, as senators passed two bills allocating approximately 30 percent of the SA’s standing reserves.

Senators passed both the Beauty of Branding Act and the TedX Fundraising Act 2015 after lengthy discussions.

The Beauty of Branding Act, which allocates $6,000 toward the purchase of SA branding materials, was a contentious subject. Several senators raised concerns because the bill did not include an itemized list of what materials would be purchased.

Student Assembly Chief of Staff Drew Wilke ’15 responeded with a tentative plan for what is to be purchased. He mentioned that a vertical banner, tent, tablecloths, a horizontal banner and stickers are all potential purchases. He also noted that the Senate regularly passes bills without itemized lists.

Wilke formed the SA Branding/Marketing Committee over a month ago. The committee includes representatives from each branch of the SA to recommend branding materials. Wilke emphasized that this branding effort is not solely an executive branch effort, but an effort by the SA as a whole. He also said that he would make sure to be transparent with all of the purchases made.

“It’s not just a blank check that executive is receiving. There will be full transparency in every purchase,” Wilke said. “Once we get proofs of some of these different branding items, I will definitely run the proofs by the marketing committee to get their thoughts first, so it’s not just me, [Associate Director of Student Leadership Development] Trici [Fredrick], [Student Assembly President and Vice President] Colin [Danly ’15] and Kendall [Lorenzen ’15] deciding what proof looks best.”

The cost of the bill in terms of the total budget was a major discussion point, as the Beauty of Branding Act constituted 10 percent of the SA’s reserve. Sen. James Walker ’15 pointed out that in spending a large portion of the budget now, there is a possibility that the Senate will not be as able to fund other ideas later on in the academic year.

“I am personally just against the principle of this bill,” LaRiviere said. “I think that the Senate is a service body, and I think that the SA should work for a cause behind every dollar we spend. … Personally, I don’t really care if people know what we do, as long as I know we are doing good things for the community.”

Sen. J.C. LaRiviere ’15 explained that he did not think the spending in this bill was justified. He said he supports posters and materials that explain what services the SA provides, but he feels that the purchases Wilke proposed are not purposeful.

“I am personally just against the principle of this bill,” LaRiviere said. “I think that the Senate is a service body, and I think that the SA should work for a cause behind every dollar we spend … I think that banners, tents and laptop stickers are an unnecessary expense. Personally, I don’t really care if people know what we do, as long as I know we are doing good things for the community.”

Multiple senators still lauded the bill, saying they believe it will help increase student knowledge and recognition of the SA and the services they provide to students, with the ultimate hope that these materials will increase student attendance at SA-sponsored events. Many senators also reiterated that these purchases are an investment, as these materials are going to last the SA for years to come.

The bill was passed by roll call, receiving one nay vote from LaRiviere.

The TedX Fundraising Act was the other bill discussed in new business Tuesday night. The bill will allocate a total of $13,250 from the SA reserve to go toward speaker travel and lodging, as well as general logistics for the annual TedX Conference held at the College of William and Mary.

This will be the fourth TedX Conference hosted at the College, and the conference’s size has grown each year. This year’s conference will be held in Phi Beta Kappa Hall March 29 and will include both national and international speakers; 500 people are expected to attend.

Sen. Chase Jordan ’15, who is also President of the TedX William and Mary, was not able to attend the meeting, but he explained that the TedX conference is an important event for the College.

“The values that TedX holds are synonymous with William and Mary’s,” Jordan said. “[These values are] the idea of holding true to what your past self was, but also looking forward and innovating. At a college, especially a liberal arts institution of this caliber, it is really about spreading ideas and facilitating conversation across disciplines to kind of create a better product for humanity at the end.”

Walker reiterated that spending money now means less money to spend later in the school year. He pointed out that passing both the Beauty of Branding Act and the TedX Fundraising Act meant spending approximately 30 percent of the SA’s standing reserve funds. He suggested reducing the bill’s funding to only $10,000, but other senators opposed this, arguing that the proposed funding is concrete and necessary.

Sen. Yohance Whitacker ’16 suggested that the Senate’s spending is much heavier in the fall semester and said many of the major expenses for events in the spring have already been allocated. In addition to SA finances, TedX at the College receives funding from various administrative offices.

Senators emphasized that the TedX talks held at the College are valuable and appreciated by students. The event sold out last year.

“It’s clearly something popular for our students,” Sen. Nadia Illunga ’15 said. “I think it relates well to the culture we have at William and Mary. And the fact that we are having this again with more seats open for students, I’m sure it will be sold out again. This is something that’s becoming a well-loved tradition at our school.”

The Senate will not meet again until next semester.