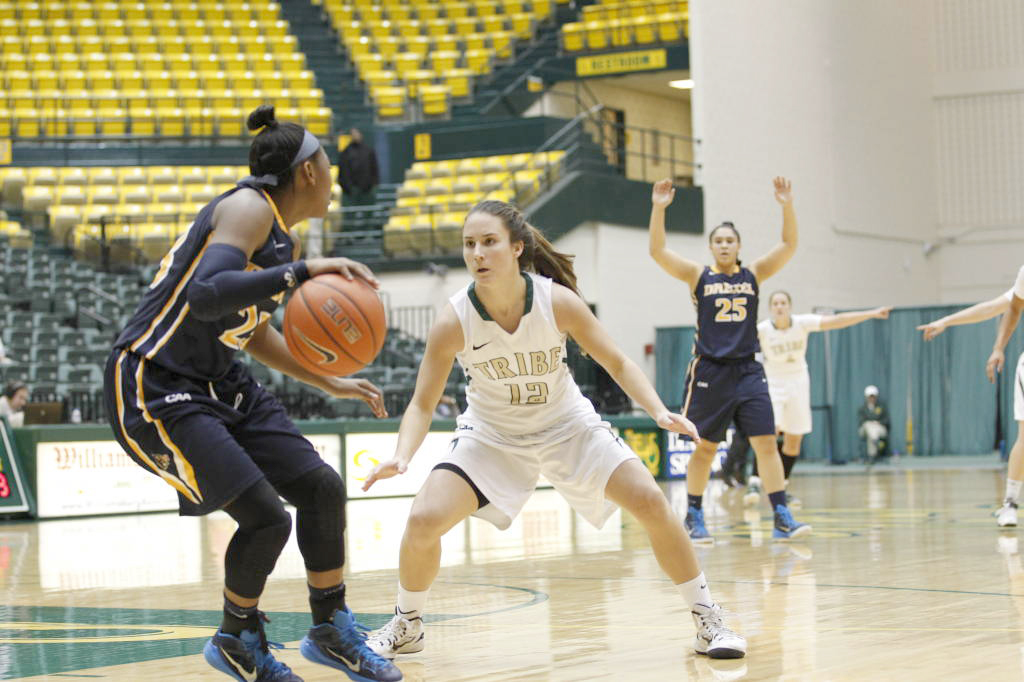 With a six game losing streak, two consecutive losses by an average of 17 points and the last victory four weeks behind them, William and Mary risked losing control of what appeared in early December to be a promising season.

A Jan. 15 game against Drexel didn’t help as the College’s (6-10, 0-5 CAA) losing slide extended to seven games in another loss by a razor-thin margin, this time a 49-46 decision at Kaplan Arena. The Tribe has now dropped six games by either a single possession or in overtime.

“Drexel does what they do, and they challenge us for a full 30 seconds on the defensive side,” head coach Ed Swanson told Tribe Athletics. “We’ve got to be more disciplined.”

In the Colonial Athletic Association standings, Drexel (10-6, 4-1) sits in fourth and trails Elon by one win. The Dragons lost to second-ranked Hofstra in overtime; in contrast, the Tribe has yet to win a conference game.

However, Swanson doesn’t think Drexel’s strong defense contributed to the Tribe’s 46-point output — second lowest on the season behind only the blowout loss to James Madison.

“We’ve got to get our confidence back; we’re missing shots at point blank, and … we had 21 turnovers, and they were key turnovers,” Swanson told Tribe Athletics.

Once again, senior guard Jazmen Boone led on both sides of the ball for the Tribe, scoring 15 points and tying a season-high with six steals. Freshman center Abby Rendle continues to impress, racking up 14 points, six rebounds, three blocks and a pair of steals against Drexel.

The Tribe started strong, building a 4-0 lead in the opening minutes. The Dragons quickly gained the advantage en route to an 11-6 lead for Drexel, a streak broken only by a jump shot from sophomore guard Latrice Hunter. Drexel closed out the half with a 7-0 run that put the Dragons ahead by 12, the largest lead of the half. A pair of steals by Boone and Rendle allowed the Tribe to close the deficit to 23-19 going into the break.

Drexel quickly took control coming out of the locker room and opened the second half with a 7-0 run. Swanson expressed concern that the team lost focus.

“When a couple [of] things go wrong, we have to be able to fight through that adversity [when] things pile on top of another,” Swanson told Tribe Athletics. “Our shots don’t fall, our defense relaxes. … When one side of the ball struggles, and we have to tighten up on the other side … we did at times, but it has to be for the full 40 minutes.”

For the majority of the second half, Drexel remained several possessions ahead of the Tribe. But, down 48-37 with three and a half minutes left, the comeback bid that wasn’t meant to be began.

Once again, Boone and Rendle led the charge as the Tribe strung together a 7-0 run to bring the score to 48-46. With only 15.6 seconds remaining, the Tribe was forced to foul Drexel. The Dragons converted one free throw for a three-point lead. A final three-point attempt from the College bounced off the front rim, and the Tribe suffered the all-too-familiar sting of a close defeat.

With a road game just three days later against CAA-opponent Delaware, Swanson said he knows the Tribe will have to get back to work.

“I’m excited to play again,” Swanson told Tribe Athletics. “We’ll get back to it tomorrow with a good, tough practice and prepare for Delaware on Sunday.”

Winless in the conference, starting a freshman, seven consecutive losses, on the road and down 15 points at half? Only a riverboat gambler in Las Vegas would’ve bet William and Mary could pull off the victory.

Against all odds, the College (7-10, 1-5 CAA) stormed back in the final 20 minutes with a vengeance, dismantling Delaware in a dominant second half.

“The energy level picked up [in the second half.] … This was a big win for us. We’d lost a lot of games in a row,” head coach Ed Swanson told Tribe Athletics. “This a tough place to play, and I’m excited that we got this key victory.”

The victory didn’t come easily for the College. After scoring the opening basket, the Tribe ceded the lead to an 8-0 Delaware run in the first 5 minutes. Delaware (7-10, 2-4 CAA) never looked back, extending their advantage to 37-22 at halftime. The Blue Hens held the advantage in shooting percentage, with 43.8 percent to the Tribe’s 34.8 percent. They also scored more points off turnovers — seven to three.

Though the College’s chances appeared slim, the Tribe’s starting freshman is no ordinary rookie. Center Abby Rendle spearheaded the College’s attack with 16 points, seven rebounds and a pair of blocks and steals en route to being named CAA Rookie of the Week. Rendle sits at 10th for the most all-time blocks in a single Tribe season.

“The win really came down to the team playing together [and] great inside passes. Playing the ball inside opened up the outside shots,” Rendle told Tribe Athletics.

Momentum didn’t immediately swing in the Tribe’s favor after halftime, as the teams traded points over the first six minutes. Once again, the College’s freshmen stepped up.

“We showed a lot of grit during that run, [and] defensively we made a lot of key stops,” Swanson told Tribe Athletics. “We helped each other on both sides of the ball.”

After scoring 37 in the first half, Delaware’s offense barely kicked into gear in the final 20 minutes and managed only 11 points — three points came on a late desperation heave that made the score appear closer than it was. The College’s zone defense suffocated the Blue Hens, allowing the Tribe’s offense to string together quality possessions.

Finally, the Tribe took its first lead of the game, up 44-43 with 4:14 remaining. Delaware briefly threatened to regain the advantage, but senior guard Kyla Kersetter added the go-ahead score. She and sophomore guard Marlena Tremba capitalized on free throws to add some breathing room to the lead.

“We’re playing a lot of young kids, and they’re getting great experience,” Swanson told Tribe Athletics. “[Rendle’s] got a great feel for the game, offensively and defensively. She’s got great timing, and I thought her classmate Jeanne Gaumont put her in some great spots … just a great team effort.”