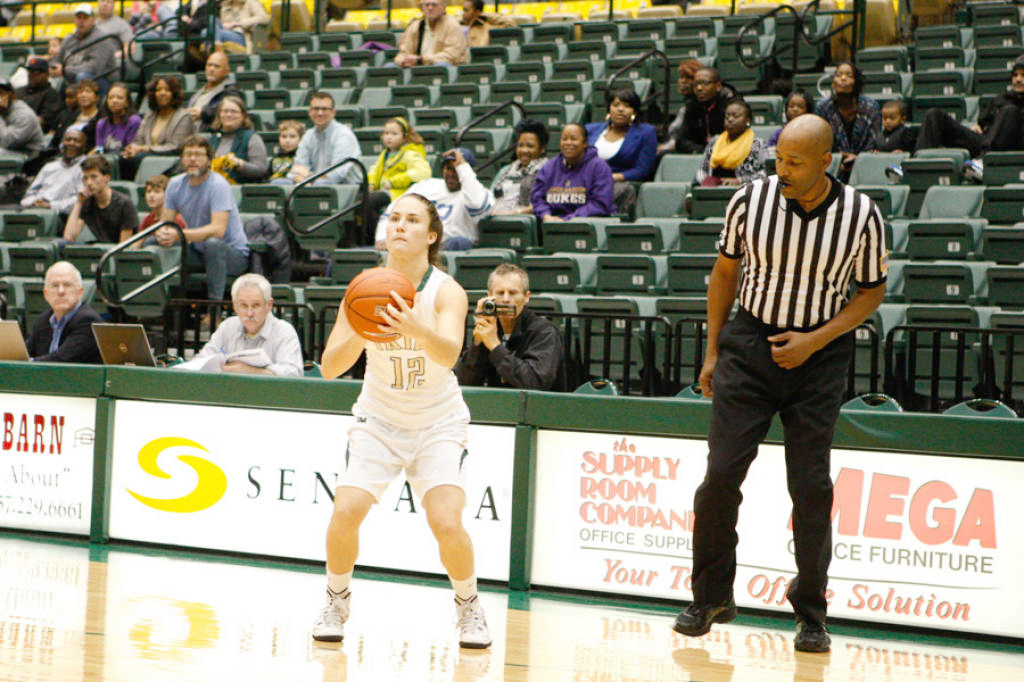 Hofstra, a conference contender, was looking for a late-season surge against the College, whose young squad was trying to recover from a massive defeat. A Pride win might as well have been printed on the tickets. However, the College must have misread the script, since it was the Tribe who triumphed, 57-56, Sunday in Kaplan Arena.

“We needed a win like this for our confidence,” head coach Ed Swanson said. “We knew Hofstra was one of the top teams in the CAA.”

After an opening basket from freshman center Abby Rendle only 34 seconds into the game, the Tribe never relinquished the lead. William and Mary (8-11, 2-6) exploded onto the court with a 13-2 opening run, propelled by steals by senior guard Jazmen Boone, Rendle’s inside game, and a couple of impressive plays — including a long three by jack-of-all-trades sophomore guard Marlena Tremba.

However, Hofstra finally recovered by the 10-minute mark, narrowing the Tribe lead to 18-13.

Defensively, the College pressed down the court in an aggressive 2-2-1 zone, often leading to a double team just past half-court. Initially, the Pride panicked on several possessions, forcing passes which waiting defenders picked off. However, as the game progressed, Hofstra continued to find holes deep in the corners. These long passes led to quick give-and-go plays, which resulted in a huge fastbreak point advantage of 20-2 for the Pride. However, Swanson pointed to the other half of that statistic: forced turnovers.

“We needed a win like this for our confidence,” head coach Ed Swanson said. “We knew Hofstra was one of the top teams in the CAA.”

“In order for us to be successful, this is what the stat sheet has to look like: they have 11 assists and 24 turnovers,” Swanson said. “We were able to come out early and steal some possessions, and knocked them on their heels.”

“We had good ball rotation; we’ve been working on it all week,” Massaquel said. “When we get good ball movement, we get open shots.”

Massaquel nearly had a double-double with 12 points and eight rebounds on the game, forcing the Pride to contend with yet another scoring threat. Massaquel, Boone, Rendle and Tremba each scored in double digits, combining for 52 of the Tribe’s 57 points.

The teams were neck and neck in the final 10 minutes of the first half, as the lead closed to 20-17 and then to 28-26. However, freshman guard Jenna Green’s long three and a forced travel on the Hofstra center allowed the Tribe to hold a 38-31 advantage going into the break.

In the second half, the Hofstra defense stiffened inside, and the Pride offense began to find a rhythm en route to a 11-2 run, closing the gap to 50-49 with just five minutes remaining. Foul shots, a disappointment for both teams in the first half — 50 percent for the College, 47 percent for Hofstra — began to fall in. Boone’s jump shot with three minutes remaining was the last time the Tribe scored, leaving its lead at 57-53. However, the College’s defense was up to task.

With 45 seconds left, the score at 57-56, Hofstra had possession looking for the final shot. However, tight man-to-man coverage forced a shot-clock violation with 18 seconds remaining.

Hofstra began to foul the Tribe on the ensuing possession and gave the College a chance to finish the game at the free throw line. But the Tribe’s free throw fell short, and Hofstra held the ball with 13 seconds left and the game on the line.

On the final possession, Hofstra’s Darius Faulk set up right outside the paint, caught the entry pass, spun into the lane and fired a layup into the outstretched arms of Rendle, who collected the game-winning block and secured the Tribe’s victory.

With the victory, the College matched its win total from each of the past two seasons with eight. The Tribe also notched its first CAA home victory, although Swanson is hardly down on the team’s 2-6 conference record.

“We’ve had a lot of heartbreak losses in final possessions, and we’re the only team in the league to play James Madison twice,” Swanson said. “2-6 is not discouraging to us at all with the way we’ve played.”