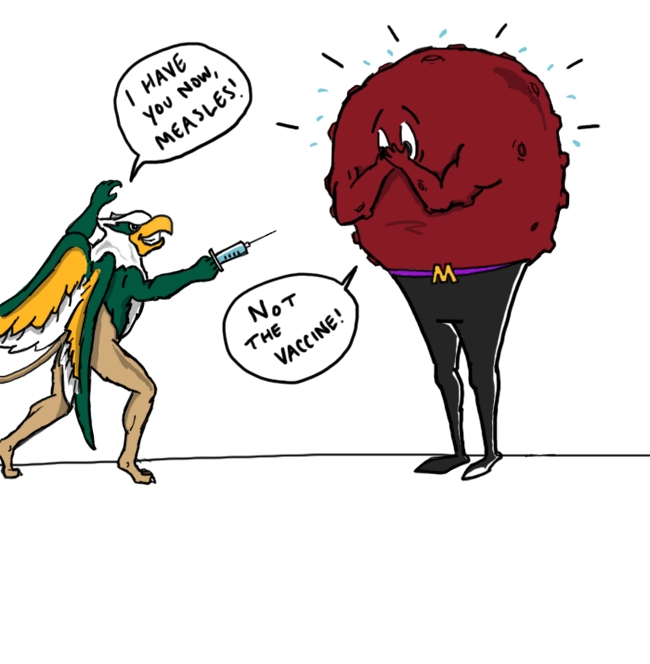 In 2000, measles was declared eliminated from the United States. In early 2015, however, what began as a small outbreak at Disneyland has grown to 102 confirmed cases across 14 states. In Arizona, over 1,000 people are currently being monitored for potential infection. The cause of this resurgence is concerning: a growing trend amongst parents who cite religious and personal objections to exempt their children from vaccination.

According to a study published in Pediatrics, some Californian counties have seen non-vaccination rates reach as high as 23 percent. The danger of “opting out” is elemental: A child unvaccinated by choice can spread the disease to those who have no such choice. Put simply, it’s a “choice” with potentially devastating ramifications.

Near-universal vaccination is most critical in public schools, particularly at the elementary level. Although students who have been vaccinated remain fairly safe from infection, infants and those with comprised immune systems remain at risk. Furthermore, the disease can remain active and contagious for up to two hours, either in the air or on infected surfaces, making it much easier to spread from child to child. Parents who choose not to vaccinate put both their own children and others at risk not only for measles, but for complications such as pneumonia, deafness and encephalitis.

Protection of religious freedom and the right to raise your child are important values, but basic safety must also be considered. We, along with parents against vaccination, must take into account that such a choice affects far more people than most personal parenting decisions.

The College follows Virginia state policy in this matter: Full-time students at four-year public institutions are required to have both doses of the MMR vaccine. Though this “requirement” does not extend to those who obtain religious exemptions, it does set a standard for everyone else. It’s certainly a step above the 20 states that allow for “philosophical exemption,” or the 22 states that do not require college students to have the MMR vaccine at all.

Basic vaccine requirements such as Virginia’s are a good start — combined with refusal to grant philosophical exemptions, they narrow down who isn’t vaccinated to purely those with either medical or religious exemptions. Another step would be to make the process of obtaining a religious exemption more rigorous than it currently is; parents who wish to exempt their child should have to renew this exemption annually with the counsel of a physician. Finally, should an outbreak occur, unvaccinated children should be barred from schools nationwide.

No one can force a parent to vaccinate their child, but, for lack of a better phrase, we are all in this together, and the consequences for those who voluntarily choose not to vaccinate are a great deal less dire than for those who are put at risk by that choice.