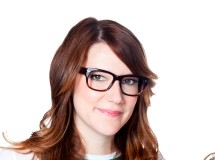 Following the premiere of “Fifty Shades of Grey,” another highly anticipated event took place for students at the College of William and Mary. Bringing together over 60 students who sought a good laugh and relief from the blustery weather, the stand-up comedy show “50 Shades of Schaef” delivered all the scandal of its namesake without the controversial plotline.

Sara Schaefer ’00, an alumna of the College and professional comedian, performed Saturday night for an enthralled group of students, packed up to the edge of the stage in the newly renovated Lodge 1. The evening opened with several routines by 7th Grade Sketch Comedy, a student group which Schaefer helped form as a student.

Schaefer previously co-hosted a television series on MTV titled “Nikki & Sara Live” and performed at the College a few years ago. According to AMP comedy chair India Braver ’16, AMP normally does not bring back repeat performers; they were excited to make an exception with Schaefer.

“We just thought it would be really cool if we brought someone back who had this connection to the campus,” Braver said. “We thought it was important to showcase the fact that our alumni do go on to do professional comedy and get their own shows, and also they come back to their school.”

Colleen Coggins ’15 was a fan before seeing her show this past Saturday night.

“I saw her on YouTube, so when they said she was coming, I had to come,” Coggins said.

Schaefer’s set included many personal stories, including peeing her pants at a grocery store in New York City. She also elaborated on her time as a student at the College, describing how her broken tailbone — the result of a late night walk to Phi Beta Kappa Memorial Hall —required her to carry what she referred to as an inflated toilet seat.

She also told jokes about the new Lodge 1 renovations, which had many students nodding along in agreement.

“I want you to act impressed that somebody from your school is up here at this huge venue.”

“What was the plan?” Schaefer said. “It’s like Martha Stewart came in and was like: ‘This shouldn’t be an entertainment venue. This should be a cafe.’”

Schaefer also entertained the crowd with sarcastic comments about her own fame and success.

“I need you to act like you care. I want you to act impressed that somebody from your school is up here at this huge venue,” Schaefer said.

But Schaefer has made it to stages considerably larger than the one at Lodge 1. On television, Schaefer has appeared on episodes of “Inside Amy Schumer” and “Last Call With Carson Daly.”

“It’s something we would all ideally like to do, even though sometimes we are afraid to say it out loud,” Carly Machlan ’16, a member of the comedy group, said.

Another member, Kareem Obey ’16, said that he can visualize himself in a career similar to Schaefer’s.

“This is what I imagine for myself,” Obey said. “It inspires hope.”

According to Kelsey Sweeney ’15, Schaefer provides a role model to the 7th Grade members looking to break into a career in comedy.

“At least some of us have taken interest in a career [in comedy], we’ve seen her stuff, read her stuff,” she said. “I’m meeting this person that is a celebrity in my mind, and she has this connection to me. That’s so cool.”