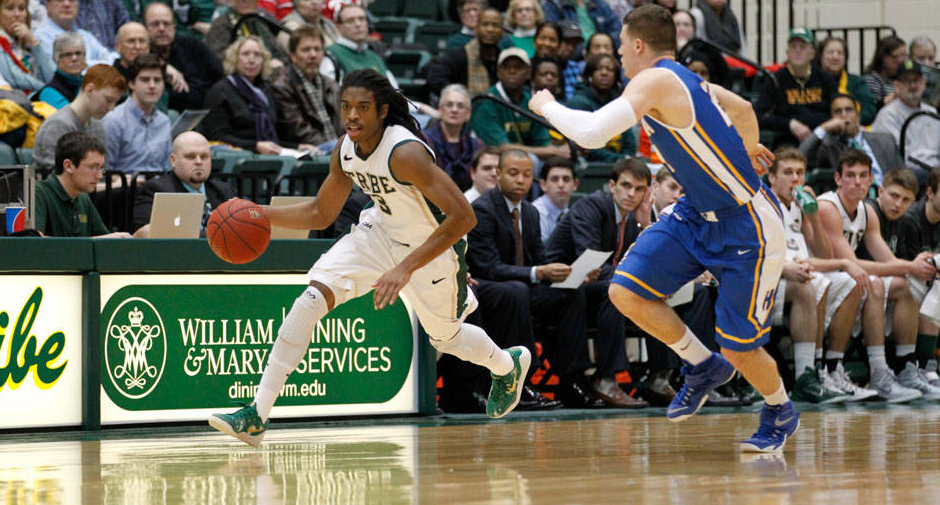 With just three and seven-tenths seconds left in the game, all eyes in the Mack Sports Complex were on senior guard Marcus Thornton as he looked up at the hoop from the foul line. Thornton took two free throws, sinking both and putting William and Mary up 80-78. As time expired, Hofstra missed a last-ditch shot as the Tribe sealed the victory.

The game began with the Tribe taking an 11-5 lead. Although the Pride twice came from behind to tie the game, the College never surrendered. Junior guard Terry Tarpey scored 10 points in the first half and hit three three-pointers. The Tribe exploited holes in the Pride’s defense, scoring 18 in the paint in the first half and taking a lead as large as seven points.

“We gave up a few too many easy drives, but we did a great job not fouling those drivers,” head coach Tony Shaver told Tribe Athletics.

“I’ve coached a long time, and that’s one of the gutsiest performances that I’ve had a team… play,” Shaver told Tribe Athletics. “After what they’ve been through this week, to play as hard and tough and competitive as they did today really impresses me.”

The Pride’s defense faltered midway through the half, allowing the College to start an 8-1 run with six minutes, and16 seconds remaining. This gave the Tribe its largest lead, with the score at 73-63 at the 4:30 mark.

Hofstra began a comeback bid, executing quick and safe plays on a 15-5 run that tied the game at 78 with 30 seconds remaining. After a timeout, Thornton whittled the clock down to the final seconds and drew a foul on an explosive layup attempt. Thornton hit his two free throws, Hofstra’s final shot fell short and the Tribe earned the 80-78 win.

“I’ve coached a long time, and that’s one of the gutsiest performances that I’ve had a team… play,” Shaver told Tribe Athletics. “After what they’ve been through this week, to play as hard and tough and competitive as they did today really impresses me.”

Thornton, currently second on the College’s all-time scoring list, recorded a game-high 23 points, and is now only 13 points behind Chet Giermack ’50, who holds the record at 2,052 points.

The statistics for the second half were in the Tribe’s favor. Defensively, the College matched Hofstra with 11 defensive rebounds and kept Hofstra to just three offensive rebounds. Additionally, the Tribe snagged 10 steals against Hofstra’s three.

Overall, the Tribe was 28 for 57 from the field, 7 for 20 on three-pointers, and 17 for 20 on free throws. Thornton led in points, followed closely by Tarpey’s 21 points and four of five shooting performance on three-point shots.

“I felt like every time we needed a play, Terry made a play for us today,” Shaver told Tribe Athletics. “People aren’t guarding him on the perimeter right now; he changed that tonight.”

With the win, the Tribe breaks a two-game losing streak and moves into a four-way tie for first in the CAA with Northeastern, James Madison, and UNC-Wilmington. The College completes its regular season scheduled road games with a 6-9 overall record and 5-4 in CAA road matchups.

The Tribe returns to Kaplan Arena for its final two games of the regular season, taking on Towson Wednesday at 7 p.m. and Drexel Saturday at 2 p.m.