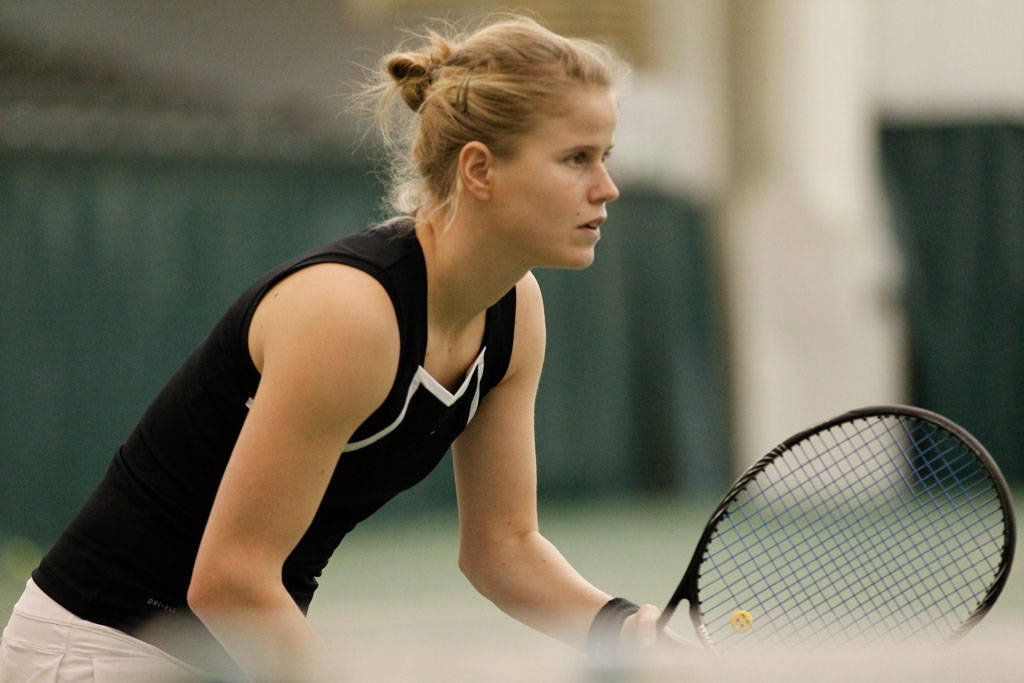 William and Mary faced N.C. State and the College of Charleston at home over the weekend, winning 6-1 and 7-0, respectively. As of last Tuesday, the Tribe is ranked No. 55 in the nation.

After its 6-1 win against N.C. State, the College now leads its series against the Wolfpack 12-1 overall and 6-1 at home.

Against N.C. State Saturday, the College swept the singles competition. Senior Jeltje Loomans (No. 2) and freshman Cecily Wuenscher (No. 6) won by the largest margins, recording scores of 6-3, 6-0 and 6-3, 6-1, respectively.

Loomans now holds a personal record of 13-4. Junior Leeza Nemchinov now sits at 16-2 overall after beating the Wolfpack’s Joanna Nalborska 6-3, 6-4, who is ranked 84th nationally, in the No. 1 spot.

The Tribe won only one of the three doubles matches against N.C. State: freshmen Olivia Thaler and Maria Groener won their second consecutive match at the No. 2 spot. Loomans and Nemchinov, coming off a six-match winning streak, failed to win their seventh in a row, falling 7-6 at No. 1.

Against Charleston, the Tribe won 7-0 Sunday and now sits at a 6-2 overall record, including 4-1 at home. The win marked the College’s first Colonial Athletic Association match of the season.

The Tribe won all of its matches, finishing especially strongly in doubles play. In the No. 1 spot, Loomans and Nemchinov won 6-0. Thaler and Groener won 6-1 at No. 2 to win their third match in a row. At No. 3, junior Julia Casselbury and Wuenscher won 6-0.

On the singles side, the College relinquished only 14 games across its six matches. Thaler, playing at No. 3, clocked a dominating score of 6-0, 6-0 against Charleston’s Katherine Schofield. No. 6, Wuenscher also won 6-0, 6-0. Casselbury won 6-2, 6-3 in the No. 3 spot against Charleston’s Helena Nyikos, clinching her third win in a row. Nemchinov won her match at the No. 1 position; she currently holds a 7-0 record in the top spot this season.

Nemchinov won CAA Player of the Week for the third time this year; the only week she did not win the honor was a week in which the Tribe did not play.

Next up for the College is CAA opponent Elon. The home match is set for 4 p.m Friday at McCormack-Negelson Tennis Center.

William and Mary dropped a pair of matches at McCormack-Nagelsen Tennis Center Saturday, falling to 10-7 for the season. Yale eased past the Tribe with a score of 4-2; the University of Maryland, Baltimore County rallied for a 4-3 decision.

The College and Bulldogs (6-2) split the No. 1 and No. 3 doubles matches. Seniors Will Juggins and Aaron Chaffee earned their third consecutive win over Yale’s Martin Svenning and Ziqi Wang, recording a score of 6-3. Freshman Christian Cargill and junior Scott Huang partnered at the No. 2 spot, falling 7-6 (5) and allowing Yale to claim the event’s first point.

Unlike the morning match, the College won the doubles competition against the Retrievers (4-2). Cargill and Huang defeated Jaan Kononov and Melker Svard at the No. 2 spot, while sophomore Addison Appleby and Niquet topped Eliott Loubatie and Justin Carter. Chaffee and Juggins didn’t finish, and were trailing 6-5 when Appleby and Niquet clinched the doubles point.

The College continues its nine-game homestand with three matches. The Tribe will next compete Saturday in a double-header against Colonial Athletic Association opponents James Madison (10 a.m.) and George Mason (4 p.m.).

A 3 p.m. Sunday match against N.C. State will conclude the weekend.