Home Sports Games Women’s basketball: Edged out in the end 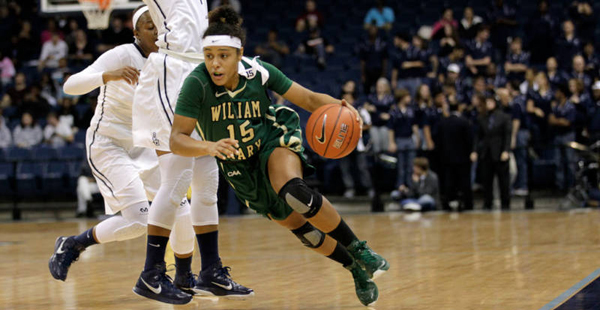 William and Mary took a tough loss Sunday, falling to Elon 64-60 in Elon, N.C. The College led 57-52 with four minutes remaining, but the Phoenix closed the game with a 12-3 scoring run to leave the Tribe with a bitter defeat.

Senior guard Jazmen Boone led the College (12-14, 6-9 CAA) with 17 points; she added six rebounds, three assists and three steals. Sophomore guard Marlena Tremba chipped in 16 points, but no other Tribe player mustered a double-digit scoring output. Overall, the Tribe shot just 39 percent from the field and missed 27 of 43 shots inside the three-point arc.

The College’s strong defensive performance helped to relieve the bitter sting of the loss. The Phoenix (16-10, 9-6 CAA) committed 10 turnovers and hit just five of 32 shots before halftime, scoring only a paltry 21 points.

However, the Tribe failed to capitalize on Elon’s first-half struggles. The College surrendered 10 turnovers in the opening half and allowed Elon to corral 15 offensive rebounds. Instead of building a large halftime lead, the Tribe entered intermission up 26-21. Notably, the College committed 13 fouls in the first half, forcing multiple starters to the bench to avoid the risk of fouling out.

“The first half was just how we wanted it to be,” Swanson told Tribe Athletics. “We had a lot of people in foul trouble … so our bench did a terrific job weathering that storm and giving us a lead at the half.”

Elon started the second half with a strong performance, using an 11-4 scoring run to take a 32-30 lead with 17 minutes remaining. Tremba responded by hitting three triples in three minutes, leading the College to a 47-38 lead with 11 minutes to play. Although Elon rallied, the College kept the Phoenix at bay, eventually holding a 57-52 lead with four minutes remaining.

“[Tremba] did a terrific job on our run; I thought we did a great job getting her open,” Swanson told Tribe Athletics. “We tried getting her a couple more looks after that that just didn’t fall.”

At that point, the College’s fortunes turned for the worse. The Phoenix scored five straight points to tie the game at 57, then used three free throws and a three-pointer to take the lead 63-57, with 34 seconds to play. Although junior guard Brooke Stewart hit a three to close the gap to 63-60, the Tribe failed to hit another shot and Elon hit a free throw to seal the 64-60 win. All told, the College allowed Elon to score 43 points after the first half, as the Phoenix shot 57 percent in the second half.

The Tribe next travels to Charleston, S.C. to take on College of Charleston Thursday at 7 p.m. After that, the College will return to Kaplan Arena to conclude its regular season. with home matchups against Towson and Drexel.