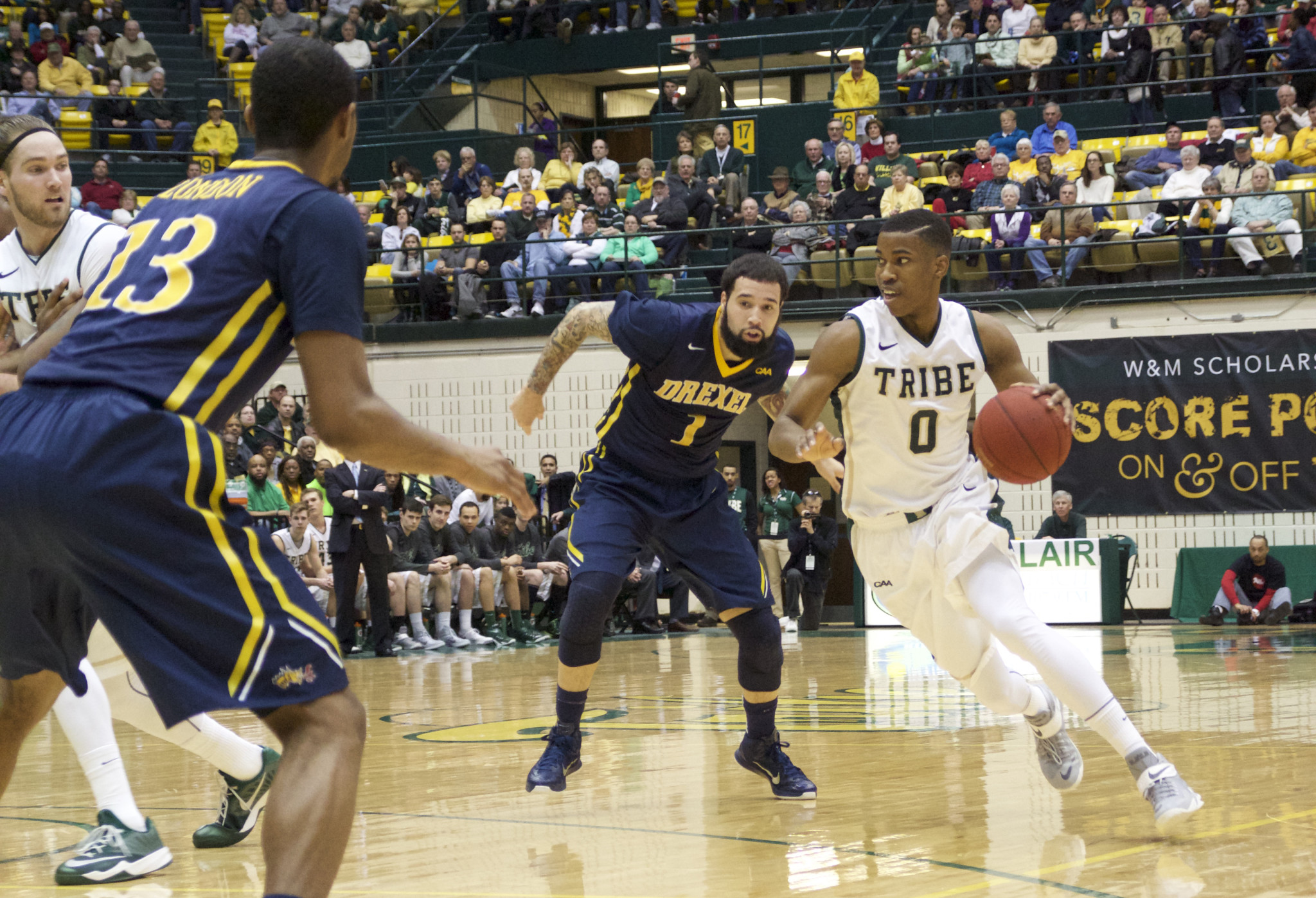 William and Mary fell to Drexel 80-66 in the final regular season game Saturday in Kaplan Arena in front of a crowd of 5,300. The loss places the College (18-11, 12-6 CAA) in a tie for the Colonial Athletic Association regular season championship.

Drexel (11-18, 9-9 CAA) and the Tribe began by tying twice at two and four before the College broke away on an 11-0 run. However, Drexel quickly cut the deficit to a single point with back-to-back three-pointers and a pair of foul shots, putting the score at 13-12 mid-way through the first half.

The Dragons and the Tribe exchanged the lead on the next set of plays. Sophomore guard Daniel Dixon, returning from a hamstring injury, knotted the game up at 20 with a three-pointer with six minutes remaining in the half.

“[Dixon] made shots for us…but defensively he’s not where we need him to be,” head coach Tony Shaver said. “Obviously it’s big getting him back out there…he can certainly help out next week.”

Minutes away from halftime, Drexel began a streak of three-pointers, establishing a 10-point advantage at the 3:30 mark, never to relinquish the lead again.  The Tribe faltered in the face of Drexel’s tight, conservative defense. With only seven healthy players, Drexel had limited substitutions in the game; efficient defending was key for the team to keep its advantage. Even with the Dragons’ roster limitations, Drexel scored 14 straight points to bring the score to 37-21 at the half.

Despite increased defensive pressure by the Tribe, however, the Dragons continued to sink shots from beyond the arc and in the paint. Drexel led 46-29 with 15 minutes left in the game.

Junior forward Terry Tarpey fought to keep the College in the competition, breaking up Drexel’s offensive rhythm with a pair of lay-ups. All-time College scoring leader senior guard Marcus Thornton, who only scored five points in the first half, played a larger role in the second half, adding 14 points and four assists in the comeback bid.

Despite the Tribe’s effort, Drexel retained defensive control of the paint, making it difficult for the College to grab rebounds. Drexel began to draw fouls late in the game, converting 17 for 22 of its free throws in the second half. The fouls and consistent shooting shut down the Tribe, and the Dragons took the victory with a final score of 80-66.

“We weren’t as crisp as we’d like to be, so we have to find a way to get back to that and that’s when we play good basketball,” Thornton said.

The Tribe outscored Drexel 45-43 in the second half, but the Dragons’ first half lead powered them over the College’s second half surge.

“We need to get a couple of our good players back playing well, and obviously defensively on boards we have to keep working on it,” Shaver said. “We’ve got to get better in every phase of the game really.”

Defensively, the Tribe grabbed 24 boards while Drexel grabbed 36.  Drexel scored 10 points from second-chance shots as a result of their strong presence in the paint, which allowed for several tip-in shots.

“We need to get a couple of our good players back playing well, and obviously defensively on boards we have to keep working on it,” Shaver said. “We’ve got to get better in every phase of the game really.”

With the loss the Tribe wraps up its regular season, finishing its home schedule with a 12-2 mark in Kaplan Arena.

“It’s pretty disheartening, we’re going into the postseason now and shrug this off, we’ve got to look ahead and make the most of what we can in Baltimore.” Tarpey said.

The College earned the No. 1 seed in the CAA Championship Tournament for the first time in program history, along with the regular season conference title.

On March 7 the Tribe will face the winner of the first round game between eighth-seeded Elon and ninth-seeded Towson in the quarterfinals at noon.