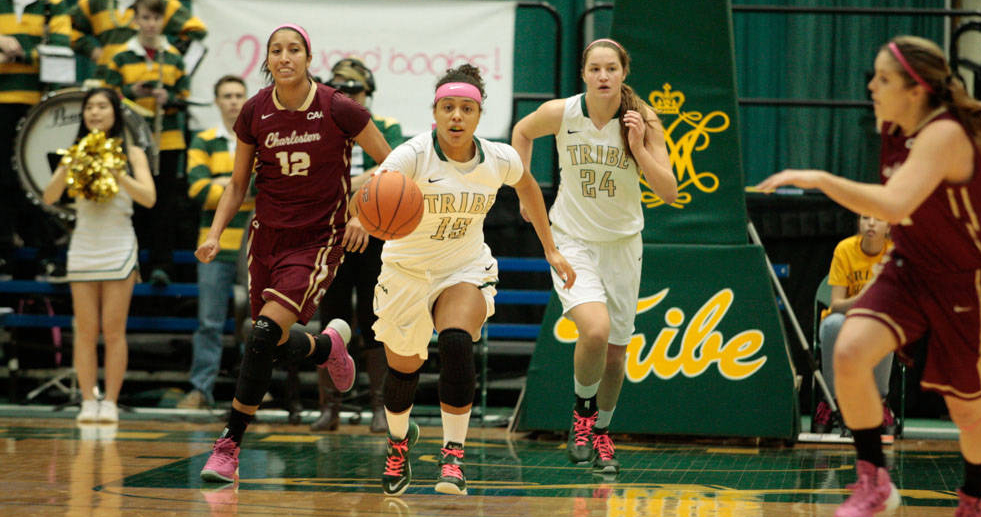 Over the past week, William and Mary played 80 minutes of basketball. During that time, the Tribe only trailed its opponents for a cumulative total of two minutes and 43 seconds. During the remaining 77 minutes, the Tribe held significant leads over the College of Charleston and Northeastern. The two wins, which saw the team demolish Charleston 84-55 and top Northeastern 62-47, resulted in the College’s record hitting .500 for the first time since Feb 6.

The Tribe (14-14, 8-9 CAA) left a snowy Williamsburg for a road matchup against College of Charleston, Thursday, Feb. 26. The hapless Cougars (5-23, 3-14 CAA) were unable to stop the Tribe, and the 29-point win is the biggest conference win of the season for the College. The College shot a school record 61.8 percent from the floor, hitting 34 of 55 shots.

“We got good looks at the basket… We were getting people good shots and I think we have players that if you give them open shots they’ll make open shots,” head coach Ed Swanson said.

Freshman center Abby Rendle led all players with points, scoring 16 on the day. She also had four rebounds and blocked three shots. Sophomore guard Marlena Tremba was a force from outside of the arc, hitting 5 of 9 three-point shots en route to a 15-point performance. Tremba also led the team with 5 steals. Two other Tribe players, senior guard Kyla Kerstetter and sophomore guard Latrice Hunter, also scored in the double digits, both putting up 10 points.

The Tribe honored its seniors before the game Sunday against the Huskies, giving a brief tribute ceremony to seniors Jazmen Boone, Kyla Kerstetter, Anna Kestler and Mackenzie Morrison. The players did not let their emotions overcome them, however, and they played a dominant game against Northeastern.

“Coach always said play with emotion, not be emotional.” Morrison said. “Once we got done with the presentations before the game and we got the jitters out and hit the ground running.”

The Huskies (4-26, 1-16 CAA) managed to start out strong and hold a small lead during the first few minutes of the game. A layup by Rendle put the Tribe on top 8-7 with 15 minutes left in the first half, and the College never looked back. The Tribe led by as much as 24 points before finishing with a 15-point victory.

Showing his appreciation to the seniors, Swanson started Boone, Kerstetter and Morrison; the three of them played very well in their penultimate home game. Morrison put up seven points and blocked a shot in her first start of the season. Kerstetter had a well-rounded stat sheet with seven points, seven rebounds and three steals. Boone scored a team-high 14 points and added seven rebounds, dishing out six assists and grabbing five steals. Sophomore forward Alexandra Masaquel also contributed to the win, scoring 12 points and grabbing 6 rebounds.

The College has seen its fair share of struggles on the glass, but they had no such issues today. Kerstetter, Boone and Masaquel combined to grab 20 rebounds, 10 of them offensive.

The Tribe has one final home game, facing Towson Wednesday at 7 p.m. With a win, they would achieve the first regular season with a winning record in almost a decade. After that, the College competes in the CAA championship in Baltimore, Md., from March 12-15.