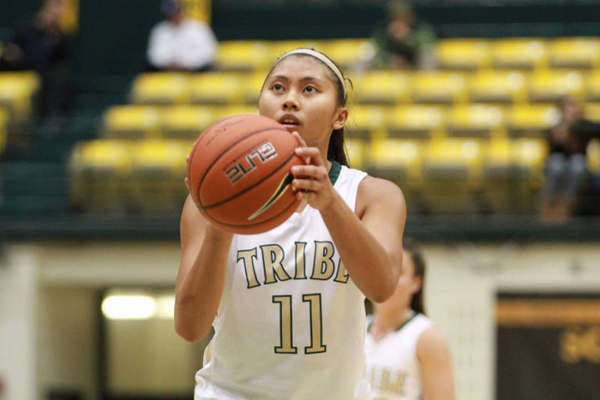 William and Mary made history this season by earning its first postseason tournament berth in program history. The selection committee for the Women’s Basketball Invitational selected the Tribe as a No. 7-seed. The College played No. 2-seed Xavier in Cincinnati, Ohio, and lost by a single point 57-56 March 19.

The Tribe (15-16, 9-9 CAA) took an early deficit as the Musketeers (18-14, 8-10 Big East) opened with an 11-3 scoring run over the first six minutes of the first half. Both teams exchanged possessions with occasional scoring, and at the nine minute, 40 second mark, a layup by sophomore forward Alexandra Masaquel brought the College within five points of Xavier with the score at 15-10. Masaquel again scored a quick layup two minutes later to cut the Tribe deficit down to a three-pointer for a score of 15-12 at 7:48. Though College’s offense attempted poor shots due to tight coverage by the Musketeers, the Tribe repeatedly grabbed defensive boards on Xavier’s missed shots, keeping the game close throughout the half.

Entering halftime, Xavier led 26-21. Of the Musketeer’s 26 points, 22 were in the paint, exposing the Tribe’s defensive weakness inside.

Almost immediately after the start of the second half, senior forward Jazmen Boone hit a successful shot from beyond the arc, starting the College’s second half surge. Exchanging possessions and points as in the first half, the Tribe finally tied at 34 with 13:23 remaining after a 6-0 run. The Musketeers took the lead once more, but the College’s improved defense and shooting again tied the game at 38 at the 10:40-mark. The College took the lead on its next shot and extended its lead to 11 with a score of 51-40 with less than six minutes left. After the tie at 34, the Tribe accumulated a 17-2 run en route to an 11 point lead.

“At halftime, the team responded,” head coach Ed Swanson told Tribe Athletics. “We came out with a different attitude, a different energy, and a different emotion on the floor that allowed us to take an 11-point lead.”

Just as the game was beginning to swing in the Tribe’s favor, Xavier stole the momentum with a 9-3 run over the last three minutes. With 14 seconds to go, the Musketeer’s Jenna Crittendon hit the go-ahead lay-up for the last points of the game. The Tribe took possession with 10 seconds left, but sophomore guard Marlena Tremba missed a three-point shot with four seconds left that just jumped out of the rim as the College took the loss. The Tribe was defeated by a margin of a single point in its first postseason appearance as Xavier advanced to the second round of the WBI after its 57-56 victory.

Overall, the College shot 24 for 59 in field goals, two for 13 in three-pointers, and six for 10 in free throws. Xavier outscored the Tribe in field goals, netting 25 of its 50 attempts. Neither team completed a three-point shot in the first half: Xavier shot two for 16 beyond the arc.

“[The seniors] are the foundation of our program moving forward,” Swanson told Tribe Athletics. “Nonconference schedule we had a winning record, and we fought back from a 1-6 start to go 9-9 [in conference] and earn a postseason berth in the WBI against a good Big East team on the road. We fought them tooth and nail…just didn’t get it done.”

In free throws, the Tribe outmatched Xavier, as the Musketeers only went five of 12 from the foul line. Much of the College’s advantage stemmed from its eight steals and Xavier’s 19 turnovers, but the defensive breakdowns after taking the 11-point lead resulted in the Tribe’s defeat.

“[Masaquel] had a terrific game; she was all over the place offensively and defensively,” Swanson told Tribe Athletics. “She was our energy, and what was good is that I think the rest of the team caught on after halftime, they matched her intensity level.”

The Tribe ends its season with the loss, entering the offseason eager to match the standards set by the this year’s record season come November.

“[The seniors] are the foundation of our program moving forward,” Swanson told Tribe Athletics. “Nonconference schedule we had a winning record, and we fought back from a 1-6 start to go 9-9 [in conference] and earn a postseason berth in the WBI against a good Big East team on the road. We fought them tooth and nail…just didn’t get it done.”