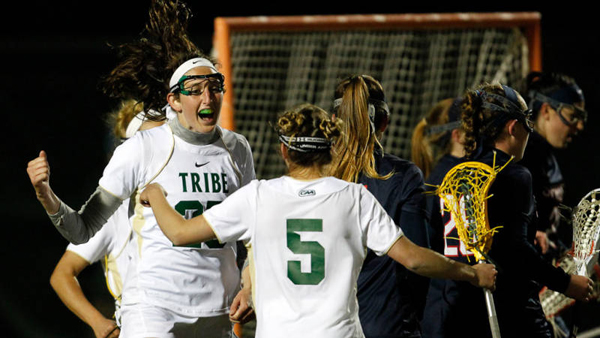 Just three and seven-tenths seconds remained on the clock, the score tied at 10-10. Junior attack Zoe Boger stood poised at the far left of the 8-meter line, her stick primed in the shooting motion, shifting focus between Richmond’s goalie and the referee for the free-position shot, awaiting the ref’s signal. The whistle blew, defenders crashed: Boger juked right, spun left and fired…

The Friday night matchup between William and Mary and its archrival Richmond was to end in overtime, a game that seemed straight out of a Hollywood script.

After a fiercely contested 60 minutes of regulation, the pair of three-minute periods in overtime proved even more intense, as the fans at Martin Family Stadium collectively held their breath and wrung their hands at each possession.

Finally, freshman attack Danielle Palmucci rolled out behind the goal and fired a laser of a pass straight to senior midfielder Ellen Shaffrey in stride cutting to the goal. Shaffrey’s shot rang true, sinking into the bottom corner of the net with 1:23 remaining in the extra period. Junior goalkeeper Meredith Crizer rejected the final Richmond shot with 44 seconds remaining as the Tribe (4-4, 0-0 CAA) prevailed against the Spiders (3-6. 0-0 Atlantic 10) by an 11-10 mark in overtime on Friday night.

“We play[ed] with a sense of calm that eventually led to the win” head coach Hillary Fratzke said. “Playing within themselves, and playing calm, that was the big key to the overtime, when [Richmond] got a little frantic [we] didn’t, we were able to execute tonight.”

As time expired at the end of the first overtime period, Richmond appeared to take the lead, but the referees determined the clock had already hit zero. The Spiders lost composure on consecutive possessions with off-target passes, though the Tribe had difficulty capitalizing off the errors — the College had two shots denied before Shaffrey finally secured the game-winner.

“For some reason, even though they aren’t in our conference, Richmond is always just a battle for us,” Shaffrey said.

The matchup began with both offenses grinding against stonewall defenses, as neither team managed a shot in the opening seven minutes.

“Defensively, we played disciplined,” Fratzke said. “Richmond is a very strong one versus one team, we knew that if we could hold them out of one-on-one situations, that [would be] our strength.”

“We worked on different offenses that get everyone open, and I happened to be the one today.”

Though the College won the turnover battle, forcing 22 against the Spiders, Richmond’s patient ball rotation led to the Tribe defense playing for long stretches of time in the first half. The Spiders began to build momentum, gradually securing a 4-1 advantage with 7:14 remaining in the half.

Yet the Tribe attack continued to draw penalties, as Palmucci capitalized on her free position shot to bring the score to 4-2 going into the half.

Right out of halftime, the Tribe appeared poised to bulldoze its rival right to the final whistle, as the College stormed in front with a 4-0 run. The run began with another free-position shot, this time by Shaffrey.

The Spiders’ armor began to crack as senior midfielder Amanda Johnson sliced by a Shaffrey screen, which floored Johnson’s oblivious defender. The quick 2-on-1 opportunity allowed Johnson to pass to Shaffrey, who fired in the first of her five goals.

“Great offensive movement led to those goals,” Shaffrey said. “We worked on different offenses that get everyone open, and I happened to be the one today.”

Off an assist by freshman attack Abby Corkum, Shaffrey turned a hat trick with three consecutive goals to bring the Tribe to 5-4. Corkum then found an opening at the crease for the Tribe’s sixth at 23:30.

Richmond stormed back with a 4-0 run of its own with just under 12 minutes remaining. Shaffrey broke the streak with another goal, and the last of the College’s successful free position shots. Sophomore midfielder Shannon Quinn found the equalizer, dodging and ducking between four Spider defenders in the process.

Richmond took a 9-8 lead at 5:36, the Tribe responded with a fast break in which Corkum juked a Spider defender out of her shoes for the College’s ninth goal, assisted by Shaffrey at 5:27.

The team’s traded goals in the final three minutes, Richmond’s at 2:55, and the Tribe’s with 49 seconds, courtesy of Goss. After Shaffrey’s fifth tally in overtime, the Tribe held on to win 11-10.

While certainly she sees rides and offensive mistakes as areas to work on, Fratzke was pleased with the Tribe effort.

“If you have tons of energy and play for each other, you can’t lose.” Fratzke said.

“We used our heart and hustle to get this win.” Shaffrey said.

The Tribe extended its win streak to four Sunday. This is the longest stretch since the 2009 season, as the College pounded the hapless Bulldogs of Garner-Webb 22-3 at Martin Family Stadium to get back to .500 on the year.

The next matchup for the Tribe won’t be so easy, as No. 8 University of Virginia looms ahead for a home matchup Wednesday at 7 p.m.