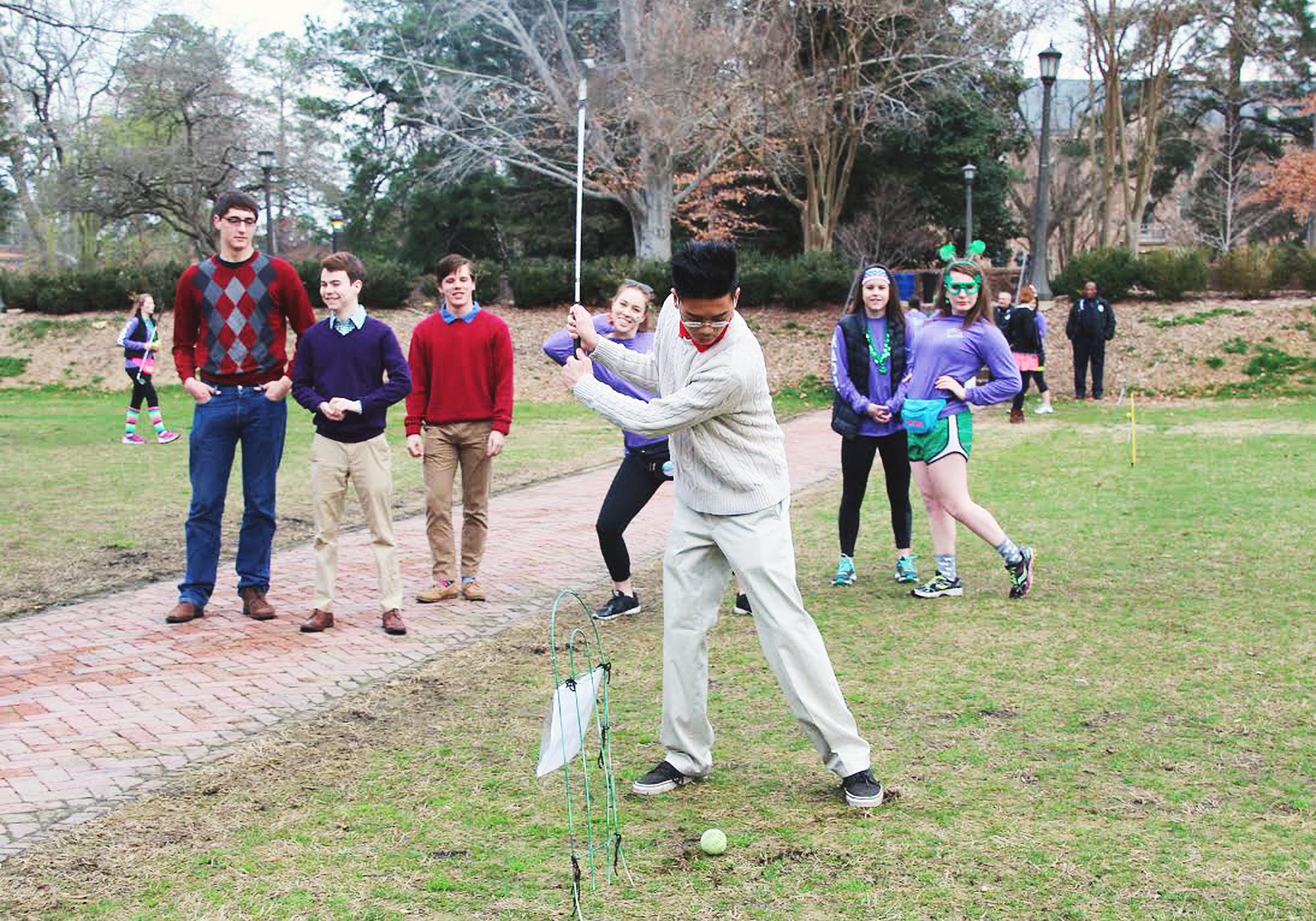 It was February 21, and it was 30 degrees Fahrenheit. Ice and snow buried everything in an apocalyptic storm reminiscent of “Snowpiercer.” Needless to say, Campus Golf was delayed until March.

Just after spring began—but before pollen painted the campus yellow—The Flat Hat’s Campus Golf team gathered its clubs and tennis balls to compete in the annual event, held this year on Sunday, March 22.

The Flat Hat team not only consisted of members of the Sports and News sections, as it did in 2013, but took in golfers from all walks of (newspaper) life, including Variety, Online, and Photography. Made up of a patchwork of both old and new staff, the team played through the entire course without hitting anyone with clubs or balls.

Not seen on the course were Chris Weber ’15, Jack Powers ’15 and Mick Sloan ’15. The absence of these Sports giants left a large hole in the team, but it was quickly filled by newcomers. Nick Cipolla ’17 represented the Sports section, lifting the team’s spirits to cheers of “Sports!” as he putted the tennis ball at the bucket.

“When we yell ‘sports!’ it seems like we are just really excited about participating in sports,” said Editor-in-Chief Áine Cain’16. “People may be confused, but we know we are cheering for our sports desk and that’s what matters.”

Cipolla showed up at the start of the second round, joining former staff members Meredith Ramey ’15, Abby Boyle ’15 and Devon Ivie ’15 as well as current staff members Cain, Caroline Nutter ’18 and KJ Moran ’18.

The entire team was knowledgeable, to a degree, in the classic sport of golf; Ivie declared that one should say ‘fore’ before hitting a ball into a populated section of the course. Some team members did not follow this advice and narrowly missed the heads of other members.

The holes on the Sunken Garden proved easy enough. Despite their long range, there were few hazards, allowing even the most casual players to complete the round in a few strokes. However, teams’ performance were difficult to track as par was not specified and score was not kept.

Walking up the stairs on the Wren side of the Sunken Garden, the team added another member as Matt Camarda ’16 suddenly appeared. It was at the very next hole that Ramey began a new strategy: attempting to throw the ball directly at the bucket. The former editor-in-chief was unsuccessful in this strategy. Sports continued a hot streak with a wide shot on the green, but could have improved on putting as Cipolla missed the bucket twice from close range.

“I’ve never played golf in a situation like this.” Cipolla said. “Mulch is not the most advantageous substance for playing golf, but, no excuses, my putting game needs work and I hope to bring a more accurate game to 2016’s event.”

“Mulch is not the most advantageous substance for playing golf, but, no excuses, my putting game needs work…”

Rounding out the event was the final hole, a long driving shot on the sidewalk in front of James Blair Hall. Cipolla knocked a shot to the sky as if the Sunken Garden was an actual golf course; this earned him a close shot. However, the News and Variety representatives kept pace with Sports, finishing the event at estimated same strokes as Sports. By tiebreaker, Sports remains champions for another year.

The Most Valuable Player award goes not to a member of The Flat Hat’s Campus Golf team, but instead goes to the team that had the same tee time and was dressed as a mariachi band. Complete with working instruments, each time the team completed a hole and moved on, they sounded off with a quick burst of a surprisingly good-sounding tune of triumph. The mariachi team must have been practicing that in the month delay, unlike The Flat Hat team’s pseudo-theme of monochromatic colors. Congratulations to the mysterious mariachi band for entertaining the course and earning the 2015 MVP award.